09/30/20 (written by lcalderon) – Justice in Mexico, a research-based program at the University of San Diego, released a working paper by Juan García Cruz entitled, “Antes y Después: Análisis comparativo de casos de sistema de justicia penal tradicional y del sistema acusatorio”. The study is a result of the #compara project that compiles a series of indicators curated by Justice in Mexico as part of the “Justicia en Marcha” initiative to measure the implementation and consolidation of the Accusatorial Criminal Justice System (Sistema de Justicia Penal Acusatorio, SJPA). Specifically, the paper compares and analyzes some of the main procedural differences between the Traditional Inquisitorial Criminal Justice System (Sistema de Justicia Penal Tradicional Inquisitorio) and the SJPA. To make this comparison possible, the author draws on three specific cases that share important similarities and were processed under the two different criminal justice systems. The results suggest that there is an apparent consolidation of the SJPA —at least from an analytical perspective— that allows several benefits that were not possible under the traditional system.

In order to select the cases to compare, García Cruz developed a methodology that consisted in finding cases from both criminal justice systems that were as similar as possible and allowed to highlight some of the key elements of each process. The main criteria evaluated were:

After describing the selection process, García Cruz analyzes the compiled information. For the traditional system, the author needed to conduct an exhaustive revision of all court records or each case. For the SJPA, the author conducted an extensive record analysis as well as reviewing court recordings for each case. Based on this analysis, García Cruz identified 7 main indicators that allowed comparing the different procedures for each system:

Victim treatment and the role of the complaining party

Volume (size of the court records)

Lastly, the author offers a series of final considerations, emphasizing the importance of studying and understanding the different nature of both systems in order to measure the consolidation of the SJPA and assess the benefits presented by the accusatorial system.

About the author:
Juan García Cruz is a Mexican attorney. He graduated from the School of Law at the National Autonomous University of Mexico (UNAM) where he also completed a graduate diploma on Criminal Law. Mr. García studied
Criminalistics, and got a Masters of Criminal Procedural Law and Oral Trials by the Universidad Analítica Constructivista de Mexico (UNAC). He is a Research Associate at the University of San Diego’s Justice in Mexico
Program. He has collaborated with non-governmental organizations dedicated to human rights training and analysis of the criminal justice system in Mexico. He has also actively collaborated at UNAM’s Human Rights Program. Currently Mr. García is an Auxiliar de Gestión Judicial at the Federal Criminal Justice Center Mexico City. His academic and professional interests include criminal justice, transitional justice and human rights. 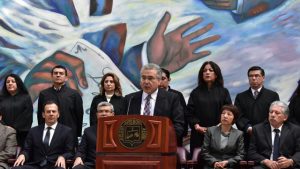 At the conference, Aureoles asked judicial authorities to recognize their role in public security, strongly implying a lack of juridical vigor in the state of Michoacán. The Michoacán governor emphasized the ardent efforts of the state’s executive officials on behalf of public security. However, he argued that these efforts were in vain without the joint support of the judicial administration. Aureoles argued that executive and judicial officials were not acting with “the same velocity” against violence and organized crime in Michoacán. He pointed to judicial authorities citing insufficient evidence resulting in the release of an alleged Michoacán organized crime leader on June 7th. “This significantly discourages and disheartens the efforts made [by the SSP],” declared Aureoles (El Sol de Morelia).

In response, Supreme Court Justice Marco Flores publicly defended the judiciary and insisted that the actions of Michoacán judges and magistrates were in accordance with both federal and state legislation. He stated that Aureole’s accusations were “unfounded and unsupported” (Mi Morelia). Flores emphasized the role of the judiciary within the parameters of Mexico’s democracy, highlighting the importance of justice unhampered by political agendas. “At all times, we have respected the division of powers in the State, which is the basis of democracy that protects us from unilateral and authoritarian intentions (Mi Morelia).”

The Michoacán judiciary is fully in support of public security efforts against violence and crime, asserted Flores. However, he reminded his audience that all magistrates and judges must act within the parameters of Mexico’s constitutional rule of law. Indirectly touching upon the release of the alleged criminal mentioned by Aureoles, Flores added, “Hence, if you fail to prove, with legal, appropriate and sufficient evidence, the alleged criminal act attributed to a person…the judge is obligated to release him, because the Constitution expects and demands it.”

Aureoles’ divisive accusations elicited other responses as well. Javier Gil Oseguera, president of the Association of Judges (Asociación de Jueces de Primera Instancia), echoed Flores’ public sentiments. “Justice is given in strict adherence to the law, respecting the principles of equality (Quadratín).” Furthermore, Judge Ramón Sánchez Magaña, the judge with jurisdiction over the disputed release of the supposed criminal on June 7th, continued to endorse the decision to release the individual due to a lack of evidence.

Violence and Crime in Michoacán

The heightened tensions between executive and judicial officials on the topic of public security are set among increasing levels of violence and crime in Michoacán. As documented by the latest Justice in Mexico Drug Violence in Mexico (2017) report, Michoacán was the Mexican state with the third highest number of intentional homicides in 2016 with 1,287 homicides. This number was a significant increase from 2015 with 922 categorized as organized crime group (OCG) homicides.

Additionally, the Drug Violence in Mexico report highlights a pattern of violence in Mexico against two categories of special victims: public officials and journalists.  According to the report, Michoacán ranked as one of the deadliest states in Mexico for both public officials and journalists in 2016. This trend continued into 2017 with the abduction of Salvador Adame Pardo, a journalist from southern Michoacán. Adame has not been heard of since his abduction. According to the Committee to Protect Journalists (CPJ), Adame had reached out to them with concerns for his safety. 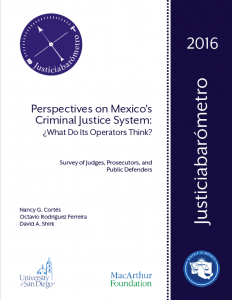 04/13/17 – Justice in Mexico, a research and public policy program based at the University of San Diego, released the English version of the latest publication in the Justiciabarómetro series, Justiciabarómetro 2016- Perspectives on Mexico’s Criminal Justice System: What do its operators think?, thanks to the generous funding from the John D. and Catherine T. MacArthur Foundation. The 2016 Justiciabarómetro provides a comparative analysis of the justice system operators’ demographics and perspectives, as well as comparisons to similar data collected in 2010. Survey participants included 288 judges, 279 prosecutors, and 127 public defenders in 11 Mexican states, with a response rate of 56%, a 2.4% margin of error, and a 95% confidence interval.