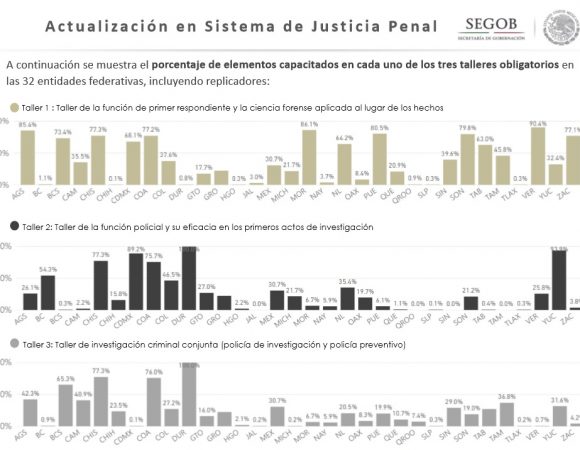 Data collected by INEGI show insufficient levels of training completed by Mexican Police throughout the country.

12/04/18 (written by kheinle) — Recent reports indicate that the majority of Mexican police are insufficiently trained on the New Criminal Justice System (Nuevo Sistema de Justicia Penal, NSJP). Just over half of all police have attended only one of three required NSJP-related trainings, according to the National Institute of Statistics and Geography (Instituto Nacional de Estadística y Geografía, INEGI). Meanwhile, 80% of Mexican police have concerns over the system’s implementation.

As outlined by the Ministry of the Interior (Secretaría de Gobernación, SEGOB), one of the required workshops focuses on first responders, scene preservation, and evidence collection. Only 12 of Mexico’s 32 states and Federal District (Distrito Federal, DF) have had over 50% of its officers complete this training. The second course covers the role of police in the beginning stages of a case’s investigation. Only six states have had at least 50% of its forces trained. The third training focuses on the joint criminal investigation involving preventative and investigative police. Even fewer states – four – have had at least half comply. Only two states have had a majority of their police complete all three trainings: Chiapas and Coahuila.

One reason for the police’s insufficient training, argued Alberto Capella, Quintana Roo’s Minister of Public Security, is the flawed structural design of the NSJP’s implementation period, which spanned eight years (2008-2016). In an article by Noticieras Televisa, Capella notes that little pressure was put on local governments to ensure their police were sufficiently trained until the end of that eight-year window. Chihuahua Attorney General César Peniche also commented on the unequal levels of training among judicial system operators. He argued that the criminal justice system must adapt in order to fill these voids.

For his part, a professor of Criminal Justice at the University of Barcelona in Spain and a native of San Luis Potosí, David Ordaz Hernández commented on the overall stagnation in the implementation of the NSJP. He faulted the lack of training of justice system operators—including police—as a main reason for its delay. Insufficient training often leads to judicial processes being done by hand, he argued. The operators do not have the learned methodology or full understanding of the system, and these inefficiencies add up.

In November, several municipal mayors and local officials acknowledged the insufficient levels of training. As reported by news source Multi Medios, Cristina Díaz, the mayor of Guadalupe, Nuevo León, for example, said that in addition to fully training police forces, they also ought to work with police in the traffic division (“los agentes de tránsito”). Other local officials, however, defended the progress of their municipalities and their efficiency with processing the law.