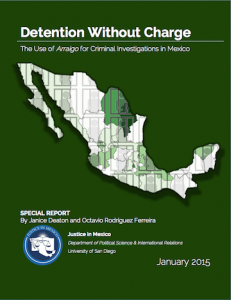 Justice in Mexico is pleased to announce the publication of Detention Without Charge, a special report provides a detailed assessment of the use of arraigo as a prosecutorial mechanism in Mexico, as national and international organizations have increasingly questioned the practice. Evidence collected for this report suggests that detention without charge is a poor substitute for due process protections that help to ensure the integrity and legitimacy of police and prosecutorial investigations. Arraigo, is a form of preventive detention that allows for imprisonment without formal charges for up to 80 days. This investigative tool is presently authorized under Article 16 of the Mexican Constitution as amended in the 2008 reforms that underpin Mexico’s ongoing transition to adversarial criminal justice.

Among the key findings of this report we find:

This is one of a series of special reports that have been published on a semi-annual basis by Justice in Mexico since 2010, each of which examines issues related to crime and violence, judicial sector reform, and human rights in Mexico. The report was formally released on January 12, 2015 and was made possible by the generous support of the John D. and Catherine T. MacArthur Foundation.

09/03/13 – After five rounds of discussions, the Mexican Supreme Court (Suprema Corte de Justicia de la Nación, SCJN) decided to give constitutional status to international treaties signed and ratified by Mexico. At the fifth and final round of discussions, ten of the 11 Justices voted in favor of a ruling that will give human rights included in international treaties constitutional status.

In addition, with a majority of six votes in favor, the SCJN ruled that the jurisprudence of the Inter-American Court of Human Rights (ICHR) is binding for Mexican judges even if the ICHR did or does not expressly mandate or name Mexico in its ruling. This means that Mexican judges have to interpret all rulings of the ICHR, not just the ones in which Mexico has been or will be a party.

The historic ruling of the SCJN was, however, overshadowed by the decision to also maintain certain restrictions on rights imposed by the Constitution, such as arraigo. Justice José Ramón Cossío Díaz, who had repeatedly expressed that the Constitution cannot be considered above human rights treaties, voted against the draft arguing that this particular ruling does not set forth a general rule to follow when there is a conflict between a treaty and the Constitution—as could be the case for arraigo—, and thus leaves the judges to decide the matter on a case-by-case basis. With the rulling approved by the other ten Supreme Court Justices, Cossío explained that whenever there is conflict between a treaty and the Constitution, the judge will have to interpret and decide accordingly, thus altering the original purpose of the discussions to create a general rule on the hierarchy of international law human rights vis-á-vis the Constitution.

For more information on the debate regarding the hierarchy of international law within the Mexican legal system, please click here.