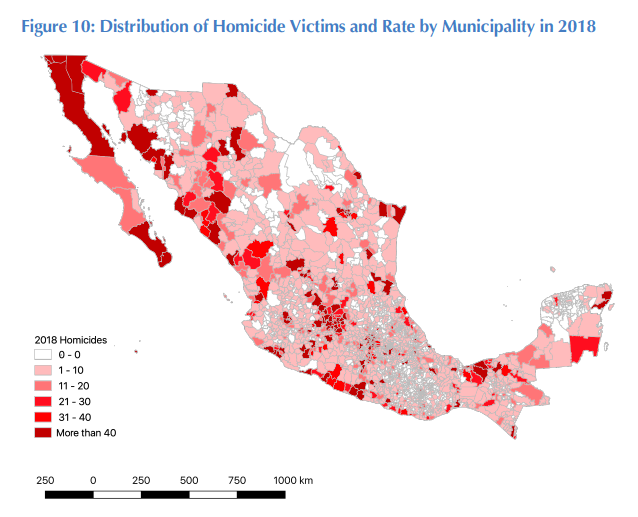 Homicides by municipality in 2018, according to data from SNSP. Source: Justice in Mexico.

08/18/19 (written by kheinle) — Mexico is on pace to have the deadliest year on record, according to data released in mid-July by Mexico’s Secretary General of National Public Security (Secretariado Ejecutivo del Sistema Nacional de Seguridad Pública, SESNSP).

The agency reported 17,608 killings in the first six months of 2019, which is 894 more than the number recorded during the first half of 2018 or a 4% increase. If that number repeats in the second half of the year, Mexico could expect to see more than 35,200 homicides for all of 2019. That could be almost 1,900 more homicides than SNSP reported in 2018. For more information on 2018’s official numbers, check out Justice in Mexico’s “Organized Crime and Violence in Mexico: Analysis Through 2018.”

The remaining 14 states all saw decreases in homicide levels, most notably that of Baja California Sur, which experienced a 66% decline in recorded killings in the first half of 2019. This continues the downward trajectory that Baja CA Sur had in 2018. During that year, the state registered the largest decrease in homicides nationwide with a 74% decline, dropping from 448 cases in 2017 to 162 in 2018. In the first six months of 2019, Nayarit followed Baja CA Sur with a 64% decrease, then Guerrero (30%), Tamaulipas (29%), Sinaloa (27%), and Durango (20%). 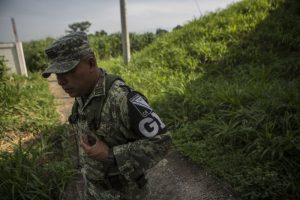 The increase in homicide rates in 2019 continues a multi-year upward trend that began in 2015. Eyes are now on the López Obrador administration for its response since taking office in December 2018.

President Andrés Manuel López Obrador took a significant, yet controversial step to implementing his strategy to address crime and violence when he launched the National Guard in June. Created from the ranks of the Mexican military and police, the National Guard will serve as a means to combat the record-breaking levels of crime and violence. President López Obrador is also approaching crime and violence through economic policies. Writes Reuters, “[the President] has blamed the economic policies of previous administrations for exacerbating the violence.” He has taken a hard stance on cultivating fiscal austerity in the country, revamping previous policies while trying to decrease the deficit and increase incoming funds.

Time will tell if the López Obrador administration’s militarized and economic strategies affect Mexico’s staggering levels of crime and violence. As the administration nears the end of its first year in office, however, the upward trend on homicide rates continue. 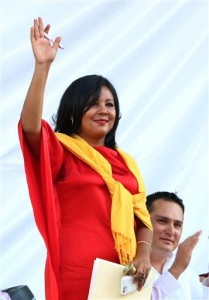 01/06/15 (written by kheinle) – The newly inaugurated mayor of Temixco, Gisela Mota, was gunned down in her home in Morelos on Saturday, January 2, just one day after being sworn into office. Mota (33) is one of nearly 100 mayors killed in Mexico in the past ten years, writes the Association of Local Authorities in Mexico (Asociación de Autoridades Locales de México A.C., AALMAC), 75 of which occurred between 2006 and 2014, according to Justice in Mexico. Documented in its Memoria dataset and noted in its annual publication, “Drug Violence in Mexico: Data and Analysis Through 2014,” Justice in Mexico reported that the peak of violence towards mayors in recent years was in 2010 when 17 mayors or former mayors were killed. For its part, the AALMAC renounced Mayor Mota’s killing and demanded the Mexican government find and hold accountable those responsible. Three suspects have since been detained, including one woman and one minor.

Mota’s murder falls in line with previous mayoral assassinations given its alleged ties to cartel and gang activity. As part of her mayoral campaign and as a former federal congresswoman, Mota had accepted state police control in her municipality and had stood tough against crime and violence, both stances that drew negative attention from local gangs. According to Morelos Governor Graco Ramirez, writes the Associated Press, Mota was killed by the Rojos gang “as a warning to other officials to reject state police control of local cops and [to] let cartels co-opt low-paid local officers.” 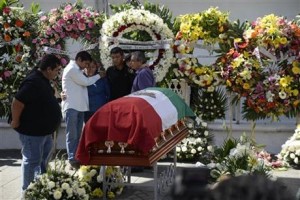 Mayor Gisela Mota’s body was laid to rest after she was killed by members of Los Rojos gang on January 2, 2016. Photo: Associated Press, Tony Rivera.

The former of Mota’s two stances—the state police control—is part of a bigger, nationwide shift to restructure police forces throughout Mexico. In November 2014, President Enrique Peña Nieto presented the plan to create a Unified Police Force following the disappearance of 43 students in Iguala, Guerrero, an incident that some have said was a result of gang fighting between the Guerrero Unidos in Guerrero and the Rojos gang in nearby Morelos, and that was compounded by the involvement of corrupt local police. Under the new model, Mexican police forces are being restructured to dissolve the nearly 1,800 municipal forces, which are notorious for being corrupted, and transfer power to the 32 state forces. By accepting state police, Mota, along with other mayors and officials nationwide, relinquished local police control, a move that is sometimes met with resistance. For her part, Mota had agreed to police control at the state level, but insisted, writes the Associated Press, that traffic cops would stay under local control in Temixco. Nevertheless, Los Rojos still targeted Mota, sending a message to other mayors and officials nationwide.

Not only is the federal government revamping the police structure to address corruption and inefficiencies at the local level, but it is also requiring police training nationwide in preparation for the New Criminal Justice System (Nuevo Sistema de Justicia Penal, NSJP). With less than six months until the NSJP must be implemented and operational throughout Mexico, the Washington Office on Latin American (WOLA) reported in September 2015 that at that time, “only approximately five percent of Mexican police officers [had] been trained on the criminal justice system reforms.” WOLA continued, “This means that 95 percent of Mexican police officers (over 333,000 agents) not only need to learn the new justice system but also how to conduct successful and rights-respecting criminal investigations, including crime scene preservation, evidence collection, and preliminary interviews with witnesses.” Police reforms and trainings are thus expected to continue in the New Year, especially in the first six months prior to the NSJP June 2016 deadline. 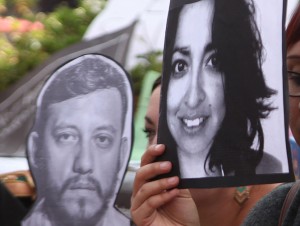 9/9/15 – (by frodriguez) – On July 31, 2015, journalist Ruben Espinoza Becerril was killed in an apartment in the Narvarte neighborhood, in Mexico City, along with four women, all with injuries all over their bodies and shot in the head. Mexico City’s authorities confirmed the identity of the journalist after his sister recognized Espinoza’s body at the Forensic Medical Service on August 1st, 2015. The female victims were identified as: Yesenia Quiroz (18) a makeup artist from the northern Mexican State of Baja California, Nicole (29) a Colombian national, allegedly Espinoza’s assistant, Nadia Vera (32) an activist from the southern Mexican state of Chiapas, and Alejandra (40) from the State of Mexico and who was believed to work cleaning the apartment.

As investigations evolve, two have been detained in relation to the case and the whereabouts of two other suspected accomplices remain unknown. On August 11, Mexican authorities took Daniel Pacheco Gutierrez into custody and on September 1, authorities detained Abraham Torres Tranquilino. There is also one women believed to have been another accomplice; but her whereabouts remain unknown. Mexico City Attorney General Rodolfo Rios Garza has informed that his job is to achieve justice by finding those responsible for the mass killing.

Espinoza, originally from Mexico City, had lived and worked for decades in the Mexican state of Veracruz, but moved to Mexico City on June 9, 2015, after receiving threatening messages such as “Bájale o te va a pasar lo mismo que a Regina Martinez,” referring he could have the same ending as Regina Martinez, journalist and Espinoza’s former boss, killed in April 2012.

There have been allegations of possible involvement of Veracruz’s state authorities in the killing of Espinoza and the four women. According to El Universal, Nadia Vera, one of the victims, filled an official report in 2014 blaming Veracruz’s Governor Javier Duarte for whatever could happened to her. Mexico’s Attorney General’s office called Governor Duarte to provide a statement on the case. Duarte denied any relationship or responsibility to the crime, and assured he would collaborate with further investigations.

In the absence of a conclusive investigation, journalists and civil rights activists, both in Mexico and abroad, have engaged in protests. Under the administration of Governor of Veracruz Javier Duarte de Ochoa, twelve journalists have been killed. 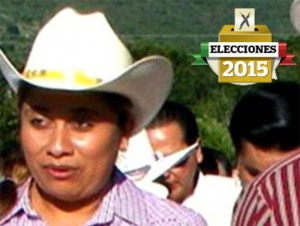 Mayoral candidate Aidé Nava González appears here in an advertisement for her candidacy before her death. Photo: Excelsior.

03/19/15 — Aidé Nava González, the 42-year-old Democratic Revolution Party (Partido de la Revolución Democrática, PRD) mayoral candidate for Ahuacuotzingo, Guerrero, was abducted by six armed men during a meeting she was having with her associates on March 9, 2015. She was found dead the next evening on the outskirts of the Ahuacuotzingo municipality on the road connecting Tlapa and Chilpancingo. According to the Guerrero State Attorney General’s Office’s (Fiscalía General del Estado, FGE) autopsy report, the cause of her death was due to shock caused by loss of blood from decapitation, which proves that Nava was alive at the time of her decapitation. Such a violent crime is often associated with the work of organized crime groups, which is also in line with the narcomensaje (“narco-message”) left with her body that was addressed to politicians that “do not want to align themselves.”

This is not the first time Nava González’ family was targeted by organized crime in recent years since her husband, Francisco Quiñónez Ramirez, became mayor of Ahuacoutzingo in 2009. On October 11, 2012, her son, Francisco Quiñónez Nava, was taken hostage on the condition that he would be released for the sum of $19,500 ($300,000 pesos). He is still missing to date. Nava González’ husband was then killed 18 months after their son went missing. Quiñónez Ramirez, who at one point was a migrant in the United States, was planning on running in the 2015 elections that his wife, Nava González, had since decided to run in his place. Quiñónez Ramirezwas the first mayor of Ahuacuotzingo to win from the PRD, and also the first mayor to hold office that did not belong to the Institutional Revolutionary Party (Partido Revolucionario Institucional, PRI). Nava González denounced her son’s abduction and husband’s killing, claiming them as crimes committed by the current PRI mayor, Daniel Hernández.

Nava González’s daughter made statements to the community in response to the deaths and kidnapping of her family in the last three years. At her mother’s burial in her hometown of Pochutla, Vanessa Quiñónez Ramírez proclaimed, “We will continue forward, we’ll be courageous just as you all have been: We will give you justice! Justice mother!” Meanwhile, a representative of the United Nations (UN) Women in Mexico, Ana Güezmes, condemned the kidnapping and homicide. At an event in honor of International Women’s Day, she stated, “We urge a prompt and thorough investigation of these unfortunate events and call that during the electoral process safety and protection be guaranteed for those who contend for elected office, especially those of women.”

This recent event adds to the ongoing turmoil in Guerrero surrounding political corruption and alleged connections with organized crime. In September 2014, 43 students were kidnapped during a protest after protestors clashed with police. In November, Iguala Mayor José Luis Abarca Velázquez and his wife, María de los Ángeles Pineda Villa, were arrested for ordering the local police force’s involvement in breaking up the protest, police that then turned the students over to criminal organization Guerreros Unidos, which is widely believed to have killed and incinerated the students’ bodies. Only one student’s remains have been found to date.