10/22/21- (written by rramos)- Justice in Mexico has released the third edition of Organized Crime and Violence in Mexico, coordinated by Laura Y. Calderón, Kimberly Heinle, Rita E. Kuckertz, Octavio Rodríguez Ferreira, and David A. Shirk. Previously titled Drug Violence in Mexico, the release marks the third consecutive year in which the report has been issued under its current name, in recognition of ongoing shifts in the nature of organized crime. During a consequential period for Mexico, this latest edition of Organized Crime and Violence in Mexico seeks to provide a comprehensive analysis of the country’s dynamic public security situation by compiling key statistics and exploring the broader significance of emerging and persistent trends.

Additionally, SNSP data showed that the occurrence of other violent crimes, such as extortion, kidnappings, and intentional injuries, decreased in 2020 compared to 2019.  However, the report notes that widespread underreporting of crimes, as well as disruptions of data collection activities and reporting mechanisms caused by the COVID-19 pandemic, leaves open the possibility that the actual numbers of crimes committed may be higher than official figures.

Special attention continued to be paid to violence against certain populations, including women and journalists. When combining totals of femicide victims and female victims of intentional homicide, the 2020 daily average of women killed each day was virtually unchanged from the average recorded in 2019. With regards to journalists, Justice in Mexico’s Memoria dataset showed that 2020 was the deadliest year for journalists and media workers, with a 169% increase in killings compared to 2019.

Reflecting the widespread and unprecedented impact of the COVID-19 pandemic throughout the globe since early 2020, the report features a section dedicated to examining the ways in which COVID-19 and measures to contain the pandemic have affected criminal groups in Mexico. Organized crime networks adjusted to the logistical challenges of supply chain disruptions and limited access to key infrastructure through a variety of methods, including artificially inflating drug prices and withholding shipments in order to maximize revenues and compensate for lost profits. As noted by the report, the impact of COVID-19 on organized crime activities may compel criminal actors to reshape and redesign their illicit operations in the future.

Also of note, criminal organizations demonstrated their ability to exploit economic hardship caused by the pandemic. A number of organized crime groups across the country engaged in delivery of aid packages and similar measures in a bid to attract support within the local communities in which these groups operate. Among those groups that provided humanitarian assistance during the COVID-19 pandemic were some of Mexico’s most well-known criminal organizations, including the Jalisco New Generation Cartel and Sinaloa Cartel.

The 2021 report also evaluated the potential impacts of certain key policies pursued by the Mexican Government in response to the country’s ongoing security challenges.

Among the topics covered was the continuing role of the National Guard, a critical pillar of President Andrés Manuel López Obrador’s public security strategy. Despite the National Guard’s continued centrality in efforts to address violence and similar measures that point to ongoing militarization of public security, official data indicates that violence and crime have remained at extraordinarily high levels throughout the López Obrador administration.

Moreover, the report touches upon the possible implications of recent developments in security cooperation between Mexico and the United States. In particular, the report delves into the ways in which the December 2020 adoption of changes to the National Security Law (Ley de Seguridad Nacional) may interrupt flows of information between Mexican and U.S. authorities or damage efforts to build trust between the two sides.

Security and violence in Mexico will remain significant challenges in the foreseeable future. Through a broad, encompassing survey of key data and statistics, Justice in Mexico’s 2021 Organized Crime and Violence in Mexico report seeks to shed further light on the complex trends and patterns influencing the overall trajectory of Mexico’s security situation. Through better understanding of the nature of crime and violence, Justice in Mexico hopes to contribute to efforts to more effectively tackle these issues.

07/30/20- (written by jhale)- Justice in Mexico has released the second edition of Organized Crime and Violence in Mexico, coordinated by Laura Y. Calderón, Kimberly Heinle, Rita E. Kuckertz, Octavio Rodríguez Ferreira, and David A. Shirk. Initially titled Drug Violence in Mexico, the report was reissued under a new name beginning last year with the tenth edition. The switch reflects recent shifts in the nature of organized crime, including the diversification of criminal activities. In an ever-changing world, Organized Crime and Violence in Mexico works to compile important statistics regarding key trends while providing insight to help understand an uncertain future.

The report cites two factors that have contributed to recent patterns in crime: infighting amongst splinter groups and diversification of revenue sources. As larger criminal organizations disband, smaller groups are left in their wake. These small enterprises often lack the logistical capacity to form trans-national criminal partnerships, and instead turn to predatory crimes to maintain revenue. Robberies, kidnappings, and territorial violence can all be linked to the actions of low-level criminal organizations as they fight to increase their market share.

Meanwhile, crime syndicates have sought to diversify their streams of income as competition increases for a stake in the drug trade. Groups such as the Zetas cartel (los Zetas) have paved the way for the transformation of drug trafficking organizations into trans-national criminal organizations. These reiterations of existing groups pose a novel threat to Mexican internal security. In addition to trafficking drugs, criminal organizations have expanded into sex trafficking, fuel theft, and illegal trade of exotic animals. The constantly shifting strategies of organized criminal groups have made law enforcement increasingly difficult for Mexican authorities.

A key topic addressed in the report is Mexico’s homicide rate, which rose to record levels in 2019. The Mexican National Security System (Sistema Nacional de Seguridad Pública, SNSP) reports that 29,406 cases of murder occurred in 2019, affecting 34,588 victims. While Mexico’s homicide rate has climbed since late-2014, the rate of increase has seemingly subsided. There was a 2.5% increase in homicides from 2018 to 2019, compared with a 20% jump from 2017 to 2018. Regardless, homicide remains a pressing issue in Mexican society. At present, homicide is the leading cause of death among individuals from the ages of 15-39. Mexico’s homicide crisis has caused incalculable suffering in families and communities throughout the country, stifling progress and cutting short the lives of thousands of young people.

Although there are some methodological challenges to proving connections between homicide rates and organized crime, the report notes that many of the same regions frequented by organized criminal groups experience higher levels of violence. The report identifies five urban regions with over 450 homicides and a homicide rate exceeding 100 per 100,000 inhabitants: Tijuana, Ciudad Juárez, Culiacán, Acapulco de Juárez, and León. The report also highlights the three most violent regions in Mexico: the North-East border region; the mid-Pacific coast; and the so-called Golden Triangle of Chihuahua, Jalisco, and Durango, a hotbed for opium production. In addition to having high homicide rates, these areas have also served as de facto centers for drug trafficking and criminal activity. According to the report, the geographic correlation of crime and homicide allows researchers to better understand how organized crime can affect violence throughout Mexico.

In addition to homicide, the report provides insight regarding trends in crimes such as kidnapping, extortion, and robbery. The report found that the number of cases of intentional injury in Mexico increased in 2019 for a fourth year in a row. According to SNSP data, 1,856 of Mexico’s 2,326 municipalities reported at least one intentional injury. Reported kidnappings steadily rose over the years but leveled off in 2018 and 2019 with an increase of roughly 15% with 1,329 reported kidnappings in 2018 and 1,323 reported kidnappings in 2019. Extortion has also been on the rise with an increase from 5,072 cases in 205 to 8,500 cases in 2019. While official statistics provide valuable insight into crime rates, the report’s authors point out that crimes of lesser import are significantly underreported and may not be a reliable indicator of predatory crime trends observed from year to year. For example, an estimated 91.2% of kidnappings are uninvestigated and remain off the official record.

In light of recent social movements highlighting gender violence, the report has included a section dedicated to the topic. Almost half (45%) of women in Mexico report having been the victim of relationship violence. Femicide, or the murder of a woman because of her gender, has seen a 130% uptick since 2015. The authors note that statistics pertaining to violence against women are skewed by the impunity of abusers and a lack of funding for local attorneys general. President López Obrador himself has come under fire for his apparent dismissal of violence against women and his use of rhetoric which pundits have described as “tepid at best”.

The report points out that women may be more empowered to report incidents of violence and sex crimes in the wake of recent protests seeking to hold abusers accountable. Furthermore, the report notes that increased scrutiny of gender violence by authorities may reflect a shift in law enforcement objectives to reflect current issues. This may help explain recent increases in sex crimes, including sexual harassment, abuse, and rape. Despite advances in prosecuting violence against women, the report’s authors note that 77% of women in Mexico feel unsafe as the overwhelming majority of crimes continue to go unreported or uninvestigated.

The killings of high profile targets such as mayors, police, military officers, and journalists has also increased. In what the report describes as a threat to the rule of law, 25 current, former, or aspiring mayors were assassinated in 2019. Statistics drawn from Justice in Mexico’s Memoria database suggest that mayors are 13 times more likely to be murdered than the average individual. Police and military leaders were also frequently targeted for their role in law enforcement, sometimes at the behest of criminal groups. Lastly, although the number of journalists murdered decreased slightly in 2019, Mexico still ranks among the most dangerous places for journalists to go about their line of work. In Justice in Mexico’s estimation, 13 journalists and media workers were killed in 2019. 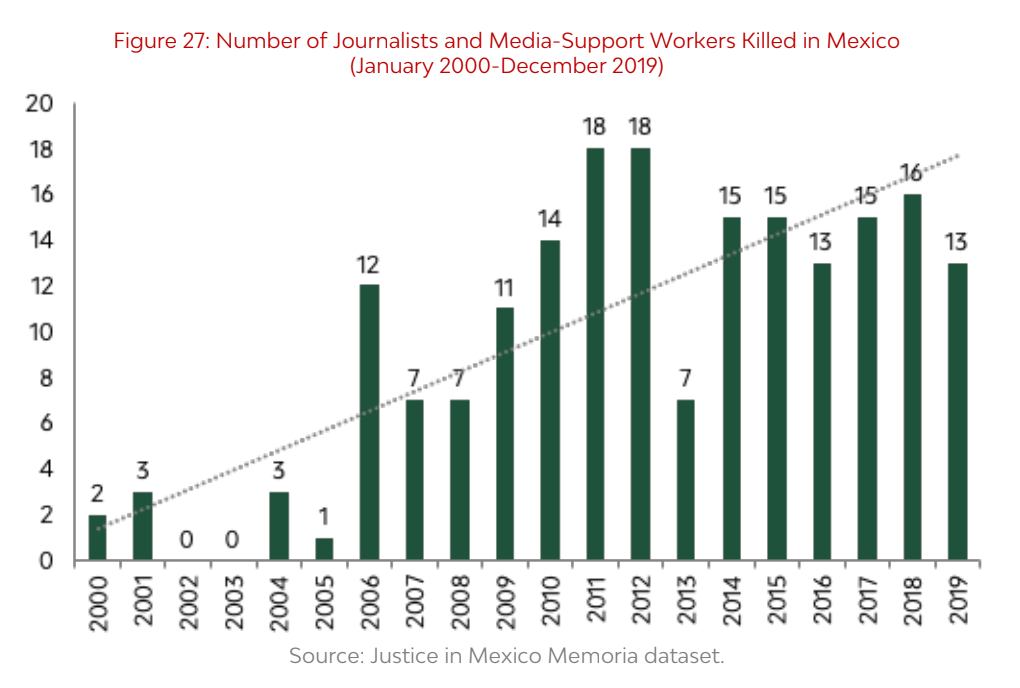 This chart, from Justice in Mexico’s Memoria dataset, illustrates the gradual increase in killings of journalists.

This report sets itself apart from previous editions by analyzing other predatory crimes perpetrated by small organized crime groups, such as intentional injury, kidnapping, and extortion. The report found that the number of cases of intentional injury in Mexico increased in 2019 for a fourth year in a row. According to SNSP data, 1,856 of Mexico’s 2,326 municipalities reported at least one intentional injury. Reported kidnappings steadily rose over the years but leveled off in 2018 and 2019 with an increase of roughly 15% with 1,329 reported kidnappings in 2018 and 1,323 reported kidnappings in 2019. Extortion has also been on the rise with an increase from 5,072 cases in 205 to 8,500 cases in 2019. The authors note that crimes such as kidnapping and extortion are chronically underreported, suggesting that official data may not be a reliable indicator of predatory crime trends observed from year to year. However, these data are useful in illustrating the aforementioned diversification of criminal enterprise.

Looking to the future

A multitude of causes and contextual factors have contributed to rising crime rates in Mexico. It is difficult to understand and easy to place blame for a problem tugging at the seams of Mexican society. Through an exhaustive overview of the data, statistics, and trends pertaining to crime in Mexico, Justice in Mexico’s Organized Crime and Violence aims to demystify a difficult subject. The authors of this report seek not only to assist in our understanding of the topic, but to paint a picture of crime in Mexico extending beyond the numbers.