12/29/19 (written by kheinle) – Mexico’s New Criminal Justice System (Nuevo Sistema de Justicia Penal, NSJP) has been in effect for well over three years, but each state’s implementation and effective functioning of the system varies widely. From public defenders to prosecutors, and from human rights protections to police officer trainings, the adversarial justice system encompasses many facets. The updates below from around the states demonstrates the NSJP’s breadth.

Just over 40% of Colima’s public defense attorneys are being let go due to budgetary cutbacks approved by that state’s Congress in December, dropping the total number on staff from 83 to 47. The president of Colima’s Bar Association (Federación de Colegios, Barras y Asociaciones de Abogados Asociación Civil), Oswy Delgado Rodríguez, spoke on the matter. He lamented that the lawyers affected were valuable, experienced, and able to sufficiently defend Colima’s vulnerable populations. Their loss would have an impact.

The lack of resources allocated to Colima’s public defenders is not unique to the state. According to the Washington Office on Latin America citing México Evalúa, “In 2018, these [public defense] agencies received less than 2 percent of a pool of funds allocated to public defenders’ offices, federal courts, the Federal Police, the National Prosecutor’s Office, and the Executive Commission for Attention to Victims.”

This is compounded by the fact that Colima has regularly been one of the latter states to advance the NSJP. As Justice in Mexico noted in its 2015 report, Colima was one of the last two states along with Hidalgo to approve the reform to implement the NSJP, not doing so until August of 2014. It was also one of the last five states to begin implementing the system itself, again not doing so until December 2014. This left just over 18 months for the state to fully implement the justice system before the constitutionally mandated deadline of June 2016.

Mexico City is complying with the nationwide push at federal and state levels to make the Prosecutor’s Office autonomous from the Executive Branch. In effect, this would bolster the adversarial justice system by “strengthen[ing] the public prosecutor’s offices in combating violence, corruption, and impunity,” writes WOLA in a detailed report from November 2019. In a follow up report, WOLA elaborated that this shift would ultimately bring the Prosecutor’s Office’s structure and investigative priorities “more in line with the adversarial system.”

The nation’s capital is doing so, however, in a “unique and innovative” way, argues WOLA. What sets Mexico City’s approach apart from the other 31 states is that the process is rooted in civil society and led by a Technical Commission. As mandated by Mexico City’s updated constitution in 2018, its State Congress is to “select a Technical Commission made up of seven civil society leaders to design a proposal for how to complete the city’s transition toward an autonomous prosecutor’s office,” writes WOLA.

The commission was filled just over a year ago and has since drafted a proposed “Implementing Law” (Ley Orgánica) to help guide the creation of the Prosecutor’s Office, specifically outlining the office’s structure and function. The Law’s main goals in establishing the Prosecutor’s Office are “improving results in high-impact cases, managing case flows and complaint reception efficiently, strengthening institutional professionalization, and ensuring strong internal controls.”

The State of Michoacán took two key steps in December to strengthen protection of human rights, a pillar of the New Criminal Justice System.

First, the State’s Legislative Committees recommended the naming of Michoacán’s head of the State Commission on Human Rights (Comisión Estatal de Derechos Humanos, CEDH). On December 4, Dr. Jean Cadet Odimba On’Etambalako Wetshokonda was nominated to the ombudsman role, edging out the other candidate, Mtra. Elvia Higuera Pérez. Cadet shared his plans for the CEDH, starting with a “reengineering” of the agency to ensure it can be flexible enough to adjust to the needs of the people. He also plans to ensure all members of the CEDH receive quality training on human rights protections to strengthen the agency’s services. This was Cadet’s second attempt to run for the position. 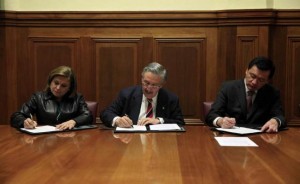 9/11/15 (written by rkuckertz) – As Mexico continues the gradual process of implementing oral trials across the country, the state of Colima stands out as it strives to surpass federal deadlines. On September 1st, three of its municipalities—Comala, Coquimatlán, Minatitlán, and Cuauhtémoc—took steps to officially adopt the New Criminal Justice System (Nuevo Sistema de Justicia Penal, NSJP). As a part of their commitment to increasing transparency and accountability throughout the penal process, these municipalities will now hold oral trials in the presence of a judge.

In March of this year, the Federal Judiciary (Poder Judicial de la Federación, PJF), the Secretariat of the Interior (Secretaría de Gobernación, SEGOB), and the Attorney General (Procuraduría General de la República, PGR) published a schedule that outlined five phases of the NSJP implementation process. The fifth phase, scheduled for completion on February 29th 2016, projected that Aguascalientes, Distrito Federal, Estado de México, Hidalgo, Morelos, Nuevo León, Quintana Roo, Tobasco, and Colima will be the final nine states to employ the oral, adversarial justice model. Given its recent advances in the implementation of NSJP, Colima is already demonstrating that it is on track to meet this deadline.

Meanwhile, concerns still exist over several Mexican states that have shown minimal progress toward federal goals. Alejandro Martí, president of Sistema de Observación para la Seguridad Ciudadana (SOS), a group dedicated to building a justice system free of impunity and corruption in Mexico, has expressed disappointment with state governments that have already implemented NSJP. In his view, government officials in these states have failed to fulfill obligations to their citizens in furthering the implementation of oral trials. He specifically spoke of Sonora as “an embarrassment”, pointing to the fact that although the state has already implemented NSJP, it had also shown no further progress in 13 months as of May this year.

Several governmental and independent agencies have published rankings that describe each state’s proximity to full implementation of NSJP. For instance, the Center for Investigation of Development (Centro de Investigación para el Desarrollo, CIDAC) published a comprehensive report at the end of 2014 that detailed the status of each state’s juridical transition. These data showed that several states had achieved remarkable progress toward full adoption of the new justice system but that the country as a whole still faced significant challenges that could halt the progression of NSJP. New data on Mexico’s recent advances will be needed in order to assess how much closer the country has come to attaining its goals over the past eight months.