Each of the presenters offered the Mexican legislature new insights on the New Criminal Justice System (Nuevo Sistema de Justicia Penal, NSJP) and its progress towards full implementation throughout the country. The reform promises the standardization of oral, adversarial trial procedures throughout Mexico in a step towards modernizing its justice system to bring greater transparency, efficiency, and fairness to criminal proceedings. Officials established the goal date of June 18, 2016 to reach full implementation of this new justice system. In light of this deadline—just one month away—the presenters shared their own experiences with Mexico’s justice system and offered thorough assessments of both the reform’s progress and the work that has yet to be done.

Mr. Rodríguez specifically shared Justice in Mexico’s findings from the research conducted under the Justiciabarómetro project, which seeks to evaluate the current levels of professional development and attitudes among actors currently operating throughout Mexico’s justice system. He also described the objectives and activities being conducted under Justice in Mexico’s four primary project initiatives, including Justiciabarómetro; the Oral Adversarial Skill-Building Seminar (OASIS) project, which seeks to provide practical training on oral litigation skills in order to ease Mexico’s transition to the New Criminal Justice System; Memoria, Justice in Mexico’s data-collection project on violence related to organized crime; and Testigo, an initiative that aims to support individuals who have been afflicted by violence and persecution in their pursuit of immigration relief in the United States.

The presentation was well received by those present in the Mexican Senate and by social media. A live Twitter audience captured many of Mr. Rodríguez’s insights on the Criminal Justice System Reform. During the presentation, Mexico Evalúa (@mexevalua) and many others commented on Mr. Rodríguez’s observations: 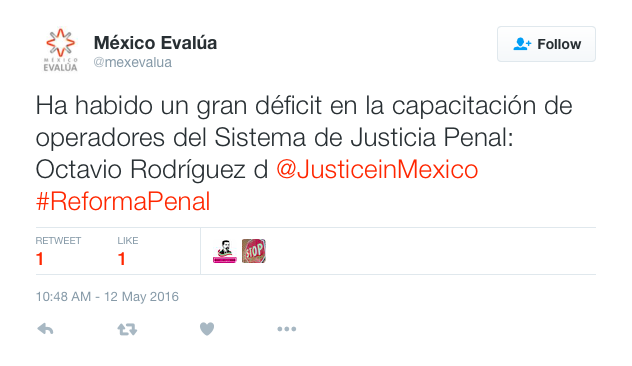 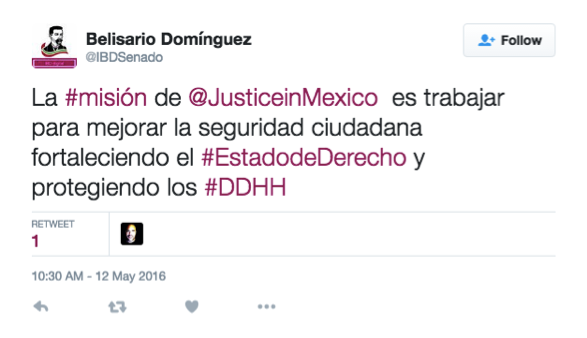 Mr. Rodríguez did an excellent job representing both the University of San Diego and the entire Justice in Mexico team at the Mexican Senate. His presentation to the Senate is one way Justice in Mexico attempts to aid researchers and policy makers alike in their understanding of the New Criminal Justice System.