6/24/16 (written by ncortes) – On June 10th, Justice in Mexico co-hosted “Promoting the Rule of Law in Mexico” International Conference with USD’s School of Law at the Hahn University Forums on campus. Approximately 100 students, faculty, legal professionals, and government officials from both sides of the border attended the international conference on Mexico’s judicial reform efforts just one week prior to the official full implementation deadline of the judicial reform.

The audience was welcomed by the heads of the organizations that made the conference possible: Dr. David Shirk, director of Justice in Mexico, Dr. Stephen Ferruolo, dean of the School of Law, and Justin Bird, vice president of Sempra Energy. In his brief opening address, Dr. David Shirk emphasized the critical time at which the conference was taking place: the conclusion of an eight-year process to reform Mexico’s justice system.

Dr. Héctor Díaz Santana, director of Inter-Institutional Coordination of the Council for the Implementation of the Criminal Justice System’s Technical Secretariat (SETEC), inaugurated the conference by offering an overview of what brought about the reform and the current challenges to its full implementation. Dr. Díaz Santana observed that the late publication of the national criminal procedural code, the lack of funding, and the tendency to procrastinate created a crisis that demanded renewed attention as the deadline approached. The government had to come up with clear plans, funding, and new indicators for evaluation. Moreover, the federal government had to acquire new technologies for investigation and help reluctant state governments assimilate to the inevitability of change. According to Dr. Díaz, there are still many issues that remain unresolved, including updating law school curriculums and informing the public. In his view, even though the implementation phase will be over by June 18, the system will need to continue to make adjustments over the long term. 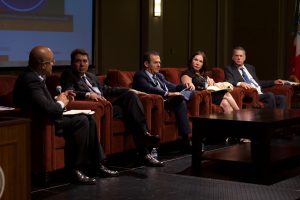 Following Dr. Díaz Santana’s reflections on Mexico’s justice reform efforts was the panel “From the Bench: Judges’ Take on Justice Reform,” moderated by Dr. Shirk. The recurring themes included newly acquired responsibilities of judges, the importance of training judges, and the United States’ partner role in this transition. Pablo Héctor González Villalobos, state court justice in Chihuahua, discussed how the reform redefined the job of judges. In the past, a judge’s duty was to serve as an instrument to apply the law while oral trials now demand judges have a more dignified role as interpreters of the law. For him, this is a radical change not often spoken of but that nonetheless carries important consequences, such as the need to implement safeguards that guarantee the impartiality of judges. Alejandro González Gómez, state court justice of Michoacán, drew attention to the absence of an established procedure that outlines the process of appeals in the new system. He recommended training programs and clearly defining the appeals process under the new system.

Judges from the United States complemented the discussion by sharing their observations and recommendations. Hon. Teresa Sanchez Gordon (Los Angeles Superior Court) shared her experience participating in a successful program implemented by the California Judges Association (CJA) that allowed for judge-to-judge interactions between U.S. judges and their Mexican counterparts. As an advocate of judge-to-judge training, she invited Mexican judges to visit California where judges are willing to take their commitment to the next level. Hon. Runston “Tony” Maino (San Diego Superior Court) pointed to the magnitude of the transformation required under the new system to emphasize that change will take time and that one should not be discouraged. He also mentioned the importance of having more individuals buy into the change in order for the change to become real. 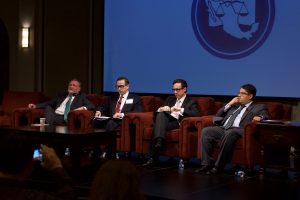 The next panel, moderated by Alejandro Rios Rippa, director of Corporate Ethics and Litigations at IEnova, focused on anti-corruption efforts in Mexico. Panel themes included the importance of prosecutorial independence, recent changes in the law, and future hopes to reduce corruption and impunity. Peter Ainsworth, senior anti-corruption counsel of the Department of Justice’s Criminal Division emphasized the importance of having the tools, ability, capacity, and most importantly prosecutorial independence in order to fight corruption. In his view, people need to be able to bring cases against their bosses. Dr. Marco Antonio Fernández, associate researcher at México Evalúa, observed that public pressure is pushing the Mexican government to deal with corruption, which has resulted in new legislation. However, much work is required to implement the new laws at the state level. Dr. Fernández drew attention to the great level of impunity in Mexico and noted that unfortunately, “patrimonialism continues to be the name of the game.”

Benjamin Hill, head of the new Specialized Ethics and Conflicts of Interest Prevention Office of the Mexican Federal Government was hopeful about Mexico’s prospects to change. He observed that while the reactions to political scandals have usually been cosmetic in the past, there are signs that this time around is different. In addition to having a working democracy and a stronger civil society aided by social media, he noted that there is now a more robust body of knowledge on corruption from which Mexico can benefit. In terms of conflict of interest, he observed it is a difficult one to discuss in a society where it is often considered a moral obligation to help one’s relatives. Mr. Rios added that sometimes individuals are not aware of what conflict of interest entails and thus it is important to have an ongoing conversation that engages civil society. 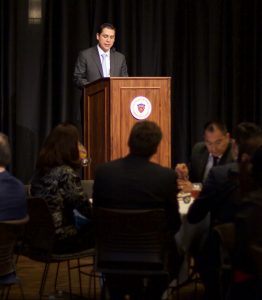 During the luncheon that followed, the audience first heard from William Ostick, U.S. consul general in Tijuana. Mr. Ostick said Mexico’s effort to reform its judicial system required a generational change and reiterated the United States’ willingness to be Mexico’s partner in that process. Mr. Ostick also introduced keynote speaker Dr. Alfonso Pérez Daza, advisor for the Federal Judiciary (Consejo de la Judicatura Federal). He outlined five procedural changes that resulted from the reform: investigation, chain of custody, writing vs. oral, preventive detention, and alternative solutions. Dr. Pérez concluded that Mexico is facing one of the most important changes in its legal history and hopes the reform will improve the criminal justice system by shortening trial times and achieving victims’ restitution. According to Dr. Pérez, “the new criminal system is not a panacea, nor will it bring an end to crime, corruption, and injustice, but I am sure it is a better system than what we have already.” 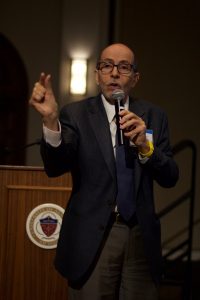 Professor Miguel Sarre speaks to conference attendees about impunity and the prison system in Mexico.

As an introduction to the last panel “Improving the Administration of Justice,” Miguel Sarre Iguíniz, professor at the Instituto Tecnológico de México, gave a brief commentary on impunity, human rights, and the prison system in Mexico. To illustrate the prevalence of impunity in Mexico, he observed that only 0.49% of criminal cases are actually reported to and investigated by authorities. Moreover, he noted the number of crimes propitiated by the government in Mexico City alone is higher than the number of crimes handled by the justice system at the national level. According to Professor Sarre, 40,000 detainees in Mexico City are forced to pay a quota three times a day in order to avoid abuses. Subsequently, there are 120,000 daily extortion cases that result from the system itself. Mr. Sarre emphasized the importance of taking into account human rights in the prison system.

Octavio Rodríguez, Justice in Mexico program coordinator, moderated the last panel in which capacity building and training, U.S.-Mexico partnership, and institutional independence were recurring themes. Ray Allan Gattinella, senior legal advisor for the Office of Overseas Prosecutorial Development of the Department of Justice observed that capacity building and training along with the professionalization of the police are the most important tasks to improve the administration of justice. Mr. Gattinella also noted the lack of institutional stability and an accreditation system for Mexican law schools may hinder progress. 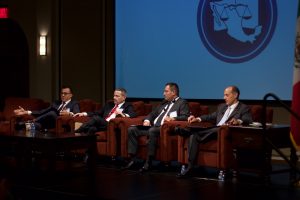 Luciano Angulo Espinoza, judge in the state of Baja California, observed the importance of receiving ongoing training. He described his personal experience of having training discontinued at a moment were it was very much needed. Judge Angulo reflected on the importance of having an independent judiciary as well as job security in order to improve the administration of justice. He mentioned that Baja California judges are ratified every five years, which hurts judges’ independence. Robert Ciaffa, federal prosecutor pointed out that Mexico will not be the only beneficiary of the efforts made to improve the administration of justice. He observed that currently there are many barriers, including lack of trust, that prevent U.S. prosecutors from collaborating with their Mexican counterparts. He observed that while Mexico and U.S. share common targets, many times this results in competition instead of collaboration. In Mr. Ciaffa’s words, “we strive for the day when we can recognize each other’s orders.” 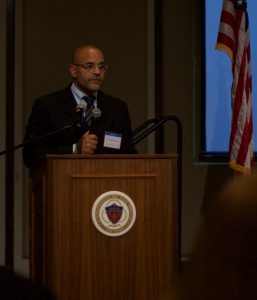 To conclude, Dr. Shirk offered his reflections regarding the outcomes of the conference. The conference will inform an upcoming Justice in Mexico report on judicial reforms and serve as a step towards further collaboration with UNAM, where Justice in Mexico will cohost a similar event September 8-9 to continue the conversation. Dr. Shirk also announced the creation of an anti-corruption course within the USD Master of Arts in International Relations and the School of Law that will hopefully attract both USD students and members of the legal community. The final and perhaps most important deliverable is the knowledge, hope, and optimism that all attendees take with them following the conference. According to Dr. Shirk, “all of us should look at this new system as an opportunity to improve the rule of law and the administration of justice in Mexico. All of us are part and responsible for helping achieve better results moving forward.”