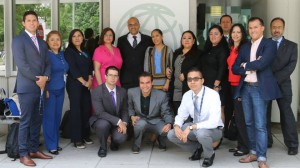 09/02/2015 (written by msmith) – A study trip to Washington, D.C. conducted by the University of San Diego’s Justice in Mexico program enabled 8 faculty and 4 students from the National Autonomous University of Mexico (UNAM) Law School to learn about the U.S. court system, criminal justice procedures, and international law more generally from June 15 to June 26. Conducted under the auspices of Justice in Mexico’s Oral Advocacy Skill-Building Immersion Seminar (OASIS), this two-week study trip was made possible thanks to the support of the U.S. State Department’s Bureau of International Narcotics and Law Enforcement (INL) as part of the Mérida Initiative.

Elizabeth L. Lippy, Assistant Director of the Stephen S. Weinstein Trial Advocacy Program at American University discussed with participants how to prepare for a trial. First she gave a brief overview on the desired content of an opening statement. She also explained the difference between direct examination and cross-examination. Lippy provided strategies for effective examination (key questions, distinguish inductive from closed- answer questions, leading the witness to say what you want to hear, preparing a set of highlights on the case that will lead the questions you make). Participants also discussed the documentary “The Shooting of Big Man” with Lippy to analyze the ways defense and prosecution lawyers conducted examination. They debated whether or not it was ethical for the defense to prepare Jack Jones in such a detailed way for the trial. Where is the line between doing a god job as defense and cheating the system by interfering with the defendant’s declaration?

Chief Circuit Mediator, Amy E. Wind, discussed with participants the alternative dispute resolution (ADR) process at the District Court of the District of Colombia. Arbitration and mediation are the two major forms of ADR. While the two most common forms of ADR are arbitration and mediation, negotiation is almost always attempted first to resolve a dispute. It is the preeminent mode of dispute resolution. Negotiation allows the parties to meet in order to settle a dispute. The main advantage of this form of dispute settlement is that it allows the parties themselves to control the process and the solution. Mediation is also an informal alternative to litigation. Mediators are individuals trained in negotiations, who bring opposing parties together and attempt to work out a settlement or agreement that both parties accept or reject. Arbitration is a simplified version of a trial involving limited discovery and simplified rules of evidence. The arbitration is headed and decided by an arbitral panel.

The study group participants spent one afternoon at the Inter-American Commission on Human Rights (IACHR). They were greeted by IACHR staff and given a brief tour of the facility. After the tour, Emilio Álvarez Icaza, the Executive Secretary of the IACHR, gave a presentation on the Commission and its work with the Americas, its relationship with the United States, and the challenges and accomplishments of the IACHR.   Following Mr. Álvarez’s presentation, he answered questions from the participants and had a question and answer session.

OASIS study trip participants also had the opportunity to attend a criminal trial in Upper Marlboro, Prince George’s County, Maryland. The participants were able to witness the entire defense case in a vehicular manslaughter trial. Deputy Public Defender Doug Irmanger represented the defendant. The participants got to see the defense expert witness testify on direct as well as cross examination, which they found very interesting. They were also able to witness four other percipient witnesses, including the defendant himself. After lunch, participants watched the closing arguments by both the defense and prosecution.

The judge took questions during the recess, which all the participants enjoyed. Following the close of trial, the participants met with Mike McCullough, the director of the American Bar Association’s Rule of Law Initiative for Latin America. (ABA ROLI). Mr. McCullogh discussed efforts to train attorneys and judges throughout the Americas, as the oral adversarial system is relatively new to all Latin American countries. Mr. McCullough also discussed the recent efforts at ABA ROLI Mexico to establish a Bar Association, to monitor dispensary and continued education issues among Mexican attorneys. 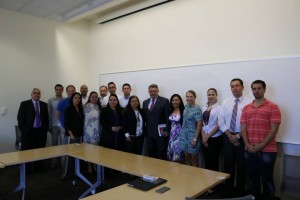 Participants also heard a lecture at American University by Professor Dan Schneider on the American trial system. Attorney Janice Deaton also participated in a round table discussion on trials and the importance of juries. The participants were very interested in the jury system, since they were able to observe half of a trial the day before. Following this discussion, Ambassador Emilio Rabasa, the Mexican ambassador to the Organization of American States (OAS) gave a fascinating talk on the importance of the new adversarial system in Mexico, its potential impact on democracy and transparency, and his role working with civil society to push the legislation through Mexican congress. Following his presentation, there was a question and answer period.

The OASIS program hosted a final program with the Mexico Institute at the Woodrow Wilson International Center for Scholars, with a panel discussion on the progress of judicial sector implementation in Mexico that included presentations by UNAM Law Faculty Dean Dr. Maria Leoba Castañeda Rivas, Prof. Alberto Castillo del Valle, Prof. Daniel Schneider, Dr. David Shirk, and Mr. Octavio Rodríguez. The public presentation drew an audience of approximately 50 government employees, experts, and academics interested in judicial reform in Mexico. This presentation was followed by a private closing ceremony for OASIS program participants, who were awarded their certificates of participation and offered constructive feedback on the two-week study trip. 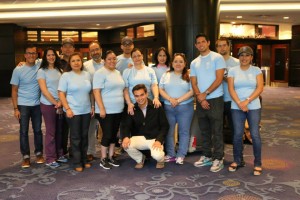