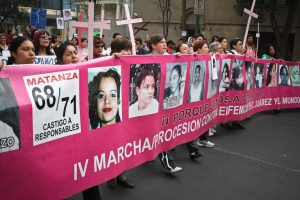 Femicide, the murder of a woman, in particular committed by a man, on account of her gender, is not new to Mexico. The majority of femicides victims are stabbed, beaten to death, or strangled. The interpersonal violence against women in Mexico has staggered over the past ten years, catching the attention of many civil society organizations, both inside and outside of Mexico. Human rights efforts are often dedicated to building public-will to address and resolve gender related crimes. According to the Telesur television network, a representative from the United Nations Human Rights to Mexico, Jan Jarab, condemned Mexico’s lack of federal action against rising femicides, which only reinforces a culture of gender-based violence. He commented “Impunity is very high so you can not see the deterrent effect of the [femicide] sanction” (Telesur). Continuing, he urged Mexico’s government to reevaluate its efforts and seek solutions to protect their women.

According to United Nations statistics, around 64,000 women and girls are killed annually. Moreover, 14 of the top 25 countries with the highest rate of femicides resides in Latin America and the Caribbean. Specific to Mexico, UN statistics show that an average of seven women are murdered daily. Some attribute the recent spike in Mexico’s femicides to the rise in violence between organized crime groups. Regardless, Mexico’s rate of femicides reflects the level of impunity characteristic of Mexico’s culture even today.

“Violence against women isn’t an epidemic, it’s a pandemic in Mexico,” said Ana Guezmez, a United Nations Women on behalf of Mexico (Reuters). A 2017 joint report from the National Women’s Institute in Mexico and the UN Women’s agency highlighted the increase of femicides from an annual rate of 3.8 femicides per 100,000 women in 1985 to 4.6 in 2016. Other statistics, like those released by Mexico’s National Commission to Prevent and Eradicate Violence against Women, report that the number of femicides increased by 500 percent between 2001-2010. According to the Guardian, the rise in femicides relatively corresponds to former President Felipe Calderon’s military strategy against organized crime, which led to an overall rise in homicides. Relatedly, the states with the highest levels of femicide are often those with a high organized crime group presence. For example, the state of Guerrero has been particularly affected by organized crime presence and in 2016, the city of Acapulco in Guerrero suffered 107 femicides, the highest number of femicides than any other municipality that year.

Due to international pressures and civil society efforts, Mexico’s chamber of deputies (Cámara de Diputados) passed counter-femicide initiative by way of legislation in 2007. This legislative sanction categorized femicide as the most serious form of gender violence, taking an important step towards preventing violence against women. The legislation also established the practice of gender violence alerts, a tool intended to provide emergency measures to women and also to bring attention to the issue of gender-based violence. In 2017, 10 Mexican states enacted a gender alert for violence against women. Out of the 671 femicides occurring in 2017, 6 out of 10 occurred in a state where an alert was activated.

Unfortunately, the National Citizen Observatory on Femicide (Obervatorio Nacional contra el Femicidio) released figures that out of the 800 femicides between January and June 2017, only 49 percent were investigated. An unidentified Reuters source commented,” Violence against women is so rife that there’s no political cost for those who don’t deal with the issue.” The Citizen Observatory, an alliance of civil society organizations partnered with UN Women, actively campaigns for increased accountability and transparency of information on the issue of femicide. According to UN Women, femicide is often the culmination of widespread gender-based violence. 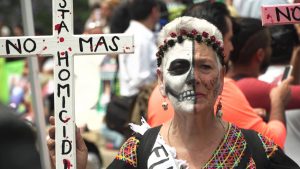 In a UN Womens’ Report “The long Road to justice, prosecuting femicide in Mexico,” the authors explain a direct correlation between Mexico’s “patriarchal, misogynist mindset and gender violence and girls which can result in death is perpetrated, in most cases, to conserve and reproduce the submission and subordination of them derived from relationships to power.” According to the authors of the report, misogyny is still very relevant in Mexico. A survey released by Reuters ranked Mexico City the fourth most dangerous city for women. According to a collaborative report, La Violencia Feminicida en México, Aproximaciones y Tendencias 1985-2016, there has been little change to the overall cultural mindset, which marginalized women as “disposable” and permeating gender-based violence, and ultimately, femicide. In 2016, there were 2,746 femicides in Mexico and in the last decade there was 23,800.

Notable organizations working towards ending the system violence against women in Mexico include: Nuestras Hijas Regreso a Casa, Red Mesa de Mujeres, El Closet de Sor Juana, Las Hijas de Violencia, etc. These activists organize campaigns, rallies and marches in order to keep femicides in the limelight and seek a solution. For example, Juarez Imelda Marrufo Nava, a women activist, works with the families of the femicide victims in order to get justice for their daughters. She began her organization, Red Mesa de Mujeres de Ciudad Juarez, in 2001, following the discovery of a nearby mass grave. Her organization focuses on attaining legal support for the victims’ families as well as bringing more attention to the issues of impunity and gender violence.
Marches are a particularly effective advocacy mechanism for raising awareness of femicides and impunity in Mexico. Recently, on March 8th, large crowds of women protested in the streets of Mexico City, demanding greater attention and accountability for women’s rights abuses. Women held signs that read, “Not one more femicide,” “I want to live without the fear of thinking that my daughter will not return.”