10/20/20 (written by kheinle) – President Andrés Manuel López Obrador is throwing the weight of the Supreme Court (Suprema Corte de Justicia de México, SCJN) behind a referendum to address past cases of criminal conduct, specifically that of corruption and ties to organized crime. In a move that is politically charged and controversial, the president’s referendum seeks to allow for former Mexican presidents to be investigated and held accountable for potential criminal acts conducted while in office.

The referendum specifically looks at the administrations from the last three decades, including former Presidents Carlos Salinas de Gortari (1988-1994), Ernesto Zedillo Ponce de León (1994-2000), Vicente Fox Quesada (2000-2006), Felipe Calderón Hinojosa (2006-2012), and Enrique Peña Nieto (2012-2018). There is only one other former Mexican president still alive, Luis Echeverría, but President López Obrador did not name him in the proceedings. Those that were named, however, are accused of being involved in “privatizations rife with cronyism, spiraling violence, and an increasing concentration of wealth,” writes The Guardian.

Nevertheless, none of the five former presidents named in the referendum have any open criminal cases against them. Rather, this referendum would simply allow for the possibility that they – and future presidents – be investigated and prosecuted for alleged crimes committed in office. Article 108 of the Mexican Constitution protects sitting presidents from being charged while serving, unless the wrongdoings pertain to treason and serious crimes against the common good (“por traición a la patria y delitos graves del orden común”). President López Obrador’s referendum would simply open the door for action to be taken after the president leaves office.

In September 2020, President López Obrador presented the referendum along with 2.5 million signatures in support to Congress. Mexico’s National Election Institute is currently verifying the signatures on the petition to ensure the validity of the registered voters. They have a 30-day window allotted from the time the document was submitted to complete their check.

In the meantime, the referendum proceeded to the Supreme Court in early October, which ruled in a vote of 6 to 5 that the referendum was constitutional and could proceed. Notably, however, the Court modified the verbiage in an 8 to 3 vote to read that investigations could be brought against “political actors,” not “ex-presidents. The judges voted to “neutralize and simplify” the wording, writes Animal Político. The language specifically changed from President López Obrador’s version, which read:

The version approved by the SCJN now reads:

The final step in the referendum’s approval process will be held in June 2021 when the plebiscite, as it is technically called, will be put before the public for a vote. This will coincide with the midterm congressional elections. Writes The Guardian, President López Obrador “wants ‘the people’ to give the green light to any legal proceedings against the country’s former presidents.”

President López Obrador made combatting and uprooting corruption in Mexico one of his major political platforms and election promises. His first year in office was rather quiet in terms of concrete action against corruption. In December 2019, however, one of the first big cases of corruption was unveiled with the arrest and extradition of former Secretary of Public Security Genaro García Luna in December 2019. García Luna faces four counts of conspiracy to traffic cocaine and making false statements, charges that he pleaded not guilty to in October 2020.

Then, in July 2020, two more high-profile cases of corruption came to fruition. This includes a case of corruption, embezzlement, and financial irregularities against the former governor of the State of Chihuahua, César Duarte. Additionally, the former CEO of Petróleos Mexicanos (PEMEX), Emilio Lozoya, was also extradited to Mexico from Spain to face similar charges of corruption, tax fraud, bribery, and money laundering.

In September 2020, another case broke involving seven government officials who are accused of accepting bribes from federal police officers. The accusations allege that more than 2.5 million pesos were illegally diverted from federal funds through money laundering between 2013 and 2017.

Then, on October 16, 2020, Mexican were again reminded of the systemic corruption ingrained in their government when the former head of the Secretary of Defense (Secretaría de la Defensa Nacional, SEDENA), Salvador Cienfuegos Zepeda, was arrested in Los Angeles. He faces charges in Mexico of ties to organized crime and drug trafficking. Read more about that story here.

06/11/19 (written by kheinle) — One of the defining pillars of President Andrés Manuel López Obrador’s (2018-2024) presidential campaign platform was his commitment to root out corruption in Mexico. Just six months after taking office, his administration has made some advances in several cases against high profile individuals and/or government officials. However, such efforts, as described below, also demonstrate just how pervasive the problem of corruption is in Mexico.

Allegations recently came forth that implicate members of the judiciary, including those at the highest level of the Supreme Court (Suprema Corte de Justicia Nacional, SCJN).

First, news came out in early June that Mexico’s Federal Judiciary (Poder Judicial de la Federación) had documented cases of serious abuses by judges and magistrates throughout Mexico from 2014 to 2018. El Universal reported that the cases involved crimes of corruption, collusion, ties with organized crime, nepotism, and sexual harassment, among others. The charges led to 49 district judges and 39 magistrates being sanctioned for their “irregularities” in the courts. Another 15 judges and magistrates were ultimately dismissed from the bench for having committed serious offenses.

Information on the alleged abuses were turned over to Mexico’s Federal Judicial Council (Consejo de la Judicatura Federal, CJF) at the end of 2018. The investigations found the states of Jalisco, Puebla, San Luis Potosí, Veracruz, and Zacatecas were involved. Jalisco, in particular, has since garnered the most attention from Supreme Court Justice President Arturo Zaldívar Lelo de Larrea to address the problem. This has included disciplinary action against justice system operators and reassignment of positions, among others. Justice Zaldívar reported success with the focused efforts. “Particularly in the state of Jalisco,” he said on May 3, “which is one of the circuits that we had learned had been dealing with all sorts of problems, we have begun to overhaul the circuit. We feel it is important to issue reassignments in order to have new blood.”

Accusations of corruption within the courts then extended to the Supreme Court not a few weeks after. On June 6, the Director of the Mexican Financial Intelligence Unit (Unidad Inteligencia Financiera, UIF), Santiago Nieto Castillo, announced that the Mexican Senate had requested his agency to look into suspicious money transfers made to the overseas accounts of sitting SCJN Justice Eduardo Medina-Mora Icaza (2015-present). An Op-Ed piece by Salvador García Soto in El Universal on June 5 reported that between 2016 and 2018, the United Kingdom’s National Crime Agency documented a total of $2.4 million (USD) deposited into Justice Medina Mora’s HSBC UK account. The U.S. Treasury Department reported similar transfers in the amount of $2.1 million (USD) into his HSBC USA account during the same time period.

One day after García’s piece was published, the Senate initiated proceedings for the UIF to begin its investigation. After the news broke, President López Obrador reminded Mexicans that Justice Medina is not guilty simply because suspicious activity was reported, and that his government was looking into it. 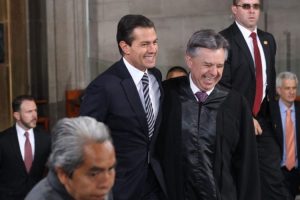 Both men are alleged to have engaged in making illegal payments through their former companies, either with unlawful earnings in Lozoya’s case or through shell companies in that of Ancira Elizondo. According to Mexico’s Financial Intelligence Unit (UIF), which is overseeing the investigations, “multiple operations were identified in the domestic and international financial system that were carried out with resources that allegedly do not come from lawful activities and which are presumed to have derived from acts of corruption.” The López Obrador administration has since frozen the bank accounts and assets of Lozoya and Ancira while the investigations unfold. “The Mexican government’s policy is zero tolerance for corruption and impunity,” said the UIF Director Nieto Castillo.

President López Obrador has held up his campaign promise and made corruption one of his biggest focuses since taking office. The high-profile cases against Pemex’s Lozoya Austin and Altos Hornos de México’s Ancira Elizondo, the dismissal of 15 district judges and magistrates, and the launch of the investigation into sitting SCJN Justice Medina-Mora, however, demonstrate the magnitude of the work President López Obrador has ahead.

In Justice in Mexico’s annual report, “Organized Crime and Violence in Mexico: Analysis Through 2018,” the authors provided recommendations for ways the López Obrador Administration and others could combat corruption in Mexico. “Mexican civic organizations, international agencies, and foreign governments can help Mexico crackdown on corruption,” they argue. “For example, foreign governments can investigate corruption claims and, where appropriate, deny travel privileges or freeze the assets of Mexican nationals wanted on corruption charges.” It continued, “International foundations and non-governmental organizations can partner with Mexican anti-corruption agencies and organizations to provide much needed funding and technical assistance.” 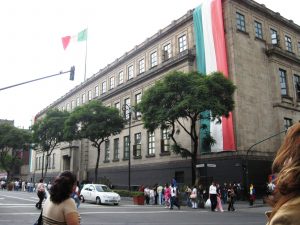