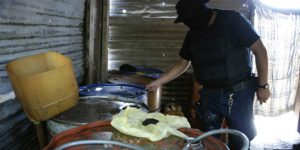 05/20/2017 (written by Laura Calderon) – A new form of organized crime has become a significant problem for Mexican authorities in over 22 states of Mexico: thefts of petroleum. Petroleum thieves are commonly known in Mexico as huachicoleros, a name adopted by gasoline truck drivers to refer to the stolen hydrocarbon, or chupaductos (pipeline suckers). Although petroleum stealing has been spreading throughout the country over the last few months, most of this activity takes place in an area called the Triángulo Rojo (Red Triangle) which encompasses the municipalities of Tepeaca, Palmar de Bravo, Quecholac, Acatzingo, Acajete and Tecamachalco, all in the state of Puebla. The Red Triangle has the most huachicolero activity because it is a transit zone for 40% of the fuel distributed from Mexico City to the rest of the country.

On average, huachicoleros are stealing 5.5 million liters of fuel nationwide. Huachicoleros are stealing petroleum in a variety of products: raw oil, gasoline, diesel, and other hydrocarbons found in major pipelines throughout Mexico and property of Petroleos Mexicanos (PEMEX). Pipeline thefts became more popular as the gasoline supply in some areas decreased and prices drastically increased across the country. As a result, huachicoleros identified an opportunity to steal petroleum products and sell them in heavily transited highways for half the market price, costing PEMEX approximately 6 million pesos in losses from 2011 to 2016. Given these losses, foreign investments have become more difficult to attract to the Mexican government’s energy sector.

Groups of huachicoleros have managed to gain community approval and support in a variety of ways. First, they offer gasoline at significantly lower prices than official gasoline stations, benefiting from volume sales rather than pricing. Second, they take advantage of special holidays and events to give some of the stolen fuel and other goods to residents within strategic areas for fuel stealing and distribution in an effort to create stronger partnerships with the community. For example, every Mothers’ Day in San Salvador Huixcolotla (state of Puebla), huachicoleros give units of stolen gasoline and home appliances to residents in an effort to build rapport and ensure protection. Finally, local communities have adopted a new kind of huachicolero subculture reflected in a new character inspired by a Catholic saint “El Santo Niño Huachicolero,” to whom residents offer barrels of fuel as an offering and prayer for protection and abundance.

Huachicolero activities have not only had significant economic impact for PEMEX and local governments, but violent altercations have 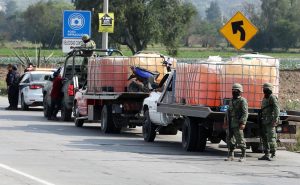 ensued between huachicoleros and federal police and military forces in at least two different cities in Mexico.

On March 30th state and military forces and a group of huachicoleros were caught in an armed conflict in the city of Cuesta Blanca (state of Puebla). When officials were surveilling the zone and observed a group of huachicoleros with at least nine units full of stolen fuel, the huachicolero group began firing. The huachicolero group was identified to be part of the criminal gang headed by Roberto “El Bukanas”. Two people were wounded and arrested for being linked to the Bukanas gang, a gang presumed to be tied to the Zetas cartel.

Another shooting between military forces and huachicoleros occurred more recently on May 3rd in Palmarito Tochapan (state of Puebla). At least two military officers were killed and one wounded when they recognized several units of stolen fuel and were attacked by the huachicoleros who were reportedly shielding themselves behind women and children. However, this shooting is highly contested by the media and Mexican authorities due to security camera footage that captured the altercation. With the videos made public, there are now contesting narratives about the specific events during the shooting and number of casualties. As this event highlights, special attention must be paid to the extrajudicial execution of a presumed huachicolero by a military officer.

After the May 3rd attack, local, state, and federal authorities began to implement more strict surveillance operations in strategic areas, in an effort to deter huachicoleros from stealing more fuel. This increase in security measures has impacted the gasoline black market in two meaningful ways: First, given how much more difficult the extraction of petroleum has become for huachicoleros, the resale price of gasoline has increased 40% over the last couple of months. As a result, consumption of their gasoline has significantly decreased forcing huachicoleros to only provide their services for a limited number of days a week and to a privileged list of frequent consumers.

In addition, on April 28th the Mexican Congress approved a legislation reform that increases sentences for fuel stealing to up to 25 years in prison and fines up to 2 million pesos if found guilty. Congress approved this initiative with 321 votes in favor, 18 against, and 37 abstentions and is planned to become effective in September. However, the head of the Ministry of Treasure and Public Credit (Secretaría De Hacienda y Crédito Público), José Antonio Meade, recently appealed to Congress to expedite the reform’s effective date  given the gravity of the situation and to initiate further comprehensive reforms to address fuel stealing.

Huachicoleros have gained increased attention from the media after their recent confrontations with federal and military authorities. As they continue to challenge local and state measures, Congress will need to continue its search for more efficient measures to tackle the issue from its source in order to eliminate that practice and hopefully eradicate the violence generated by it.