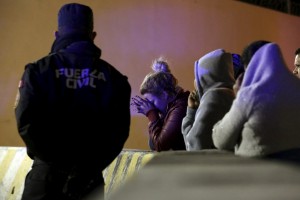 Families and friends of inmates in Topo Chico waited anxiously to hear updates on their loved ones following the February 11 riot. Photo: Daniel Becerril, Reuters.

03/06/16 (written by kheinle) – A prison riot last month in Monterrey left 49 prisoners dead and more than a dozen others hurt, five of whom suffered serious injuries. The fight broke out in the Topo Chico prison in Monterrey, Nuevo León on Thursday, February 11. It took a combined effort between the Mexican Army (Ejército), Navy (Secretaría de Marina, SEMAR), and Federal Police (Policía Federal, PF) to get the brawl under control, which lasted more than an hour. The brawl allegedly began between prisoners from rival factions of the Zetas criminal organization vying for control of the prison, some with allegiance to Los Zetas’ leader Jorge Iván Hernández Cantú, “El Credo,” and others to leader Juan Pedro Saldivar Farías, “El Z-27.” Reports indicated that prisoners carried knives, razors, bats, clubs, and other homemade weapons; they also set fire to part of the prison.

The deadly riot was the worst such incident in the last three decades in Mexico, and the latest in several smaller uprisings just in Nuevo León alone in recent years. In September 2015, a leader of Los Zetas was stabbed to death in the Topo Chico prison where he was serving time; 11 other inmates were also injured in the fight. Several years prior, 44 prisoners were killed in a fight that broke out in the Nuevo León prison of Apodaca in 2012 between inmates from rival cartels, Los Zetas and the Gulf Cartel (Cartel del Golfo, CDG). In 2011, 11 more inmates were killed in Apodaca, although that incident was allegedly not related to organized crime violence, and another 11 prisoners were killed in the Cadereyta prison in Nuevo León that same year. According to Mexico’s National Human Rights Commission (Comisión Nacional de los Derechos Humanos, CNDH), 82% of the 1,737 violent incidences that occurred in prisons throughout Mexico in 2014 were due to infighting among inmates.

At the time of the February 11 fight, Topo Chico was 35% overpopulated, with nearly 3,800 inmates incarcerated. Prison overcrowding is a serious issue in Mexico, which fuels the environment for riots and deadly brawls like the Topo Chico fight. A report published by the Center for Studies on Impunity and Justice at the University of the Americas in Puebla, the “Global Impunity Index (IGI),” found that state prisons in Mexico are overcrowded by 30%, while the world average is 17%. Prisons are thus understaffed to accommodate the number of inmates. As translated by Mexico Voices, the IGI reports, “the ratio of prison staff responsible for caring for inmates in state rehabilitation centers [in Mexico] is only 20 guards per 100 prisoners. The average for [all] IGI countries is 47 per 100.” Mexico therefore has almost double the amount of prison overcrowding compared to all other IGI countries studied while have less than half the number of prison staff to safely and effectively manage the prisons. 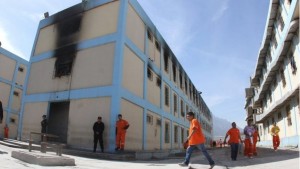 Prisoners set fire to one of the buildings in Topo Chico prison during the brawl. Photo: EPA.

In addition to prison rioting and overcrowding, staggering levels of impunity and corruption further undermine Mexico’s penitentiary system. The National Institute of Statistics and Geography (Instituto Nacional de Estadística y Geografía, INEGI) ranks Mexico 58th of 59 countries studied for highest levels of impunity in its 2015 ENVIPE survey (Encuesta Nacional de Victimización y Percepción sobre Seguridad Pública), adding that perpetrators in only 1% of all crimes in Mexico are held accountable. INEGI further argues that impunity is one of the ten most pressing issues Mexican society faces today. Even the perpetrators of crime and violence that are found guilty and serve time are not all held to equal standards, a reflection of the corruption that underpins the prison system with prison wards and administrators often bought out by inmates with deep pockets and/or criminal connections. This was the case in the Topo Chico prison, which was unearthed following the brawl in February when it was discovered that the prison was filled with “luxury cells” for incarcerated organized crime group (OCG) leaders including El Credo and El Z-27, reported BBC News. Such inmate cells allegedly include king-size beds, large TVs, mini-bars, air conditioners, mobile saunas, and more.

Since the deadly brawl in Topo Chico, 233 prisoners have been transferred to other prisons in Mexico to reduce the overcrowding and to allow authorities to investigate the incident. Several administrators and guards have also been released or arrested for abuse of authority or charges of homicide, the latter of which is being pressed on one guard who allegedly killed an inmate during the fight. While such actions are steps towards addressing the specific situation at Topo Chico, the fight between rival incarcerated Los Zetas factions that left 49 inmates dead in a prison 35% overpopulated that ultimately led to the discovery of “luxury cells” is indicative of a much more serious problem facing Mexico with its corrupt penitentiary system operating in a climate of impunity. “We are living through tragedy due to the conditions in the prisons,” lamented Nuevo León Governor Jaime Rodríguez Calderón. The former Nuevo León public security secretary added, “The problem is that the majority of Mexican prisons are out of control. They are run by organized crime and the prisoners themselves.”