8/23/17- (written by Lucy Clement La Rosa) On August 11th, Justice in Mexico commemorated 15 years of promoting bilateral cooperation between Mexico and the United States, specifically related to rule of law challenges in Mexico. The significant milestone was celebrated with a daytime seminar of several panel discussions at the University of San Diego, followed by an evening reception and award dinner. 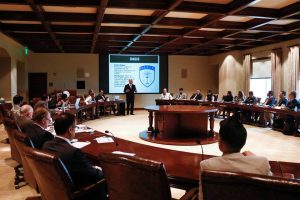 Justice in Mexico commemorated their 15th anniversary with a seminar of several panel discussions focused on rule of law challenges in Mexico.

In particular, Dr. Cornelius spoke at length of Justice in Mexico’s achievement in creating the Justiciabarómetro, a database focused on gauging the level of criminal justice reform and the perspectives of judicial officials within Mexico. Although Dr. Cornelius acknowledged that serious challenges remain in Mexico, he pointed out that the Justiciabarómetro 2016 dataset indicates an encouraging increase of favorability for the recent criminal justice reforms. Mexican magistrate of Michoacán state, Alejandro González Gómez, expounded on the remaining challenges, such as the lack of training for judges, magistrates, etc. and the low salary of Mexico’s police officers. Additionally, Maestro David Fernández Mena emphasized the important role of Mexican education institutions in strengthening criminal justice reform.

Following the seminar sessions, the participants were invited to an evening reception, followed by an award dinner. The following individuals were honored for their efforts in promoting democracy and rule of law in Mexico: Edna Jaime (founder and Director General of México Evalúa), José Ramón Cossío Díaz (Minister of the Supreme Court of Justice of the Nation and professor at the Mexico Autonomous Institute of Technology, ITAM), Dr. Miguel Basáñez Ebergenyi (ex-Mexican ambassador to the United States and professor at Tufts University), Dr. Denise Dresser (political analyst and professor at ITAM), and Dr. Cornelius (expert on immigration and Mexican politics).

The awarded individuals, sans Dr. Dresser who was unable to attend, led an informative dialogue moderated by Dr. Shirk. The discussion focused on Mexico’s recent establishment of an oral, adversarial criminal justice system and the dual role of judicial operators and legal education in ensuring positive progress. Namely, the panelists discussed the strategies and resources necessary to ensure the success of this judicial transition, as well as expounding on Justice in Mexico’s impact in providing trainings and workshops for judicial operatives.

Justice in Mexico extends the sincerest gratitude to their sponsors and donors for their contributions and support in making the anniversary event possible. The commemoration of Justice in Mexico’s accomplishments and the informative contribution of each individual who dedicated their time to the event inspire Justice in Mexico to continue strengthening and improving rule of law in Mexico.