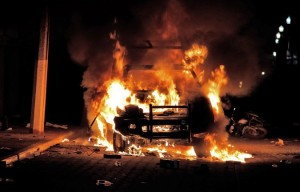 01/24/16 (written by kheinle) — Mexicans have long been frustrated with the government’s perceived inability and ineffectiveness in upholding the rule of law. This oftentimes results in civilians taking the law into their own hands and sometimes through violent vigilantism. This has manifested itself in recent years with the emergence of self-defense groups (grupos de autodefensa), many of which rose in 2013 and 2014 in Michoacán and Guerrero. While such groups have been largely brought under government regulation through the Rural Defense Corps, for example, civilians have also been expressing their frustrations more recently through lynchings.

According to a report by The New York Times, lynchings have been on the rise in Mexico. “By some accounts, there were more public lynchings this past year [in 2015] than at any other time in more than a quarter-century,” writes The Times. “There were at least 78 lynchings last year in Mexico,” it continues, “more than double the number the previous year, according to data collected by [professor and author] Raúl Rodríguez Guillén…” The most recent lynching to make national news was the burning alive of two brothers in Ajalpan, Puebla in October 2015, who were mistaken for criminals by residents. After local police stepped in to provide protection to the brothers, the town rioted, seizing them back and setting fire to the brothers, government building, and nearby library. This case also came on the heels of two lynchings the month before in Chiapas. While such incidents represent civilians operating above the law, they also represent the people’s mistrust and lack of confidence in the government to hold criminals accountable. “The mob actions were born of a sense of hopelessness and impotence shared by many in Mexico, where 98 percent of murders go unsolved and the state is virtually absent in some areas,” explains The New York Times. “By some estimates, just 12 percent of crimes are even reported in Mexico, largely because of a lack of faith that justice will ever be served.”

The World Justice Project’s annual report, “Rule of Law Index™ 2015,” released in June 2015 demonstrates Mexicans’ disappointing experiences with their country’s rule of law, based on eight factors: constraints on government powers, absence of corruption, open government, fundamental rights, order and security, regulatory enforcement, civil justice, and criminal justice. According to the WJP, Mexico ranks 79 of 102 countries worldwide in rule of law in general, and 14 of 19 countries in the Latin America and Caribbean region. What more, Mexico ranks 99th worst worldwide for Order and Security, 93rd for Criminal Justice, 88th for Absence of Corruption, and 82nd for Civil Justice. At the regional level, Mexico ranks the lowest out of 19 countries for Order and Security, 17th for Absence of Corruption, and 14th and 13th for Criminal Justice and Civil Justice, respectively. Compared to “Rule of Law Index™ 2014,” on the international level, Mexico fares the same in overall ranking (79 of 99 countries), and better in 2015 than its ranking in 2014 in Criminal Justice (97 of 99), Order and Security (96), and Civil Justice (88). Regionally, Mexico fares worse in 2015 than its 2014 overall ranking (12 of 16), Absence of Corruption (13), and Civil Justice (12), and the same for Criminal Justice (14), and Order and Security with the lowest ranking.

With civilians thinking poorly of its country’s rule of law, including the government’s ability to provide safety, security, and accountability, they continue to operate by taking the law into their own hands, thus only perpetuating Mexico’s low rule of law ranking.

Ahmed, Azam and Paulina Villegas. “As Frustrations With Mexico’s Government Rise, So Do Lynchings.” The New York Times. January 23, 2016.