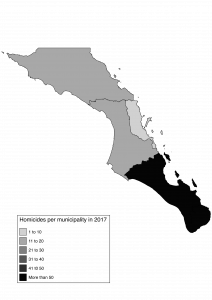 According to Calderón, Baja California Sur’s economy depends heavily on tourism and commerce. Historically, Baja California Sur is characterized by having some of the lowest rates of crime and violence in Mexico. The recent surge in violent crime over the last decade is connected to the region’s transformation into an important nexus for drug traffic operations in Mexico.

Since 2010, the Sinaloa Cartel has dominated the Baja California region- formally headed by drug trafficker, Joaquín “El Chápo” Guzmán. Guzmán’s organization looked to remove other competing organized crime groups in the region. Their success in consolidating a territory monopoly caused a drop in violence while opening their access to the U.S. market. The arrest and extradition of Guzmán caused a significant shift in the structure of Sinaloa, initiating internal competition between regional Sinaloan leaders. Additionally, with major kingpins like Guzmán being targeted by Mexican authorities, other cartels in the area took this as an opportunity to gain power. A new organized crime group called the Cartel de Jalisco Nueva Generación (Jalisco New Generation Cartel, CJNG), headed by Nemesio “El Mencho” Oseguera Cervantes is rapidly becoming the main competitor to the Sinaloa Cartel.

In response to the increased violence, Mexican authorities deployed soldiers to Los Cabos and La Paz in an attempt to lower the rates of homicides through military presence in important hotspots. This deterrence tactic required the cooperation of municipal, state, and federal forces. However, local law enforcement is often under-trained and minimally equipped to meet the challenge presented by organized crime. Overall, the militarization approach has not proven to be successful.

Calderón posits that the recent violence seen in Baja California Sur could be linked to the spillover effect from other violent states nearby. According to scholars, Miming Pan, Benjamin Widner and Carl E. Enomoto, negative economic growth of one state exacts a consequence on neighboring states, causing the crime rates to increase. Although the Sinaloa cartel continues to hold dominance over almost the entire state, excluding the contested cities of La Paz and Los Cabos, there is a strong internal struggle over the lack of partnerships and centralized leadership for the organization. Moreover, the increasing prominence of the CJNG continues to challenge Sinaloa for the largest, operating organized crime group in Mexico.

Given the salient information presented in Calderón’s working paper, it is important to note that most of the violence happening in Baja California Sur is amongst individuals involved in organized crime. Tourists should exercise caution, but also keep in mind that the number of tourists of being targeted is currently low. Meanwhile, Mexican authorities in Baja California Sur, including local law enforcement and public officials, must be willing to engage in transparent and informed dialogue. Collaboration will be key to protecting the general citizenry and tourist flows, an important source of revenue to the state of Baja California Sur.