06/18/20 (written by kheinle) — A federal judge and his wife were killed on June 16, 2020 in Colima, Colima. Around 11:30am, gunmen fired nearly 20 rounds at Judge Uriel Villegas Ortiz and his wife, Verónica Barajas, as they left their residence, killing them both. The couple’s two young daughters and an employed domestic worker survived the attack. Judge Villegas was currently serving as a district judge in Colima’s Center for Federal Criminal Justice (Centro de Justicia Penal Federal en el Estado de Colima) at the time of his death.

Mexico’s Federal Judicial Branch (Poder Judicial de la Federación, PJF) immediately condemned the attacks. “We want to send a clear and categorical message: judicial activity will continue moving forward and we will not be stopped, much less by intimidating acts, in order that we fulfill the mission with which the Constitution has charged us and that which we have sworn to defend for the sake of every person’s rights,” wrote the PJF. The president of Mexico’s Supreme Court (Suprema Corte de Justicia de la Nación, SCJN), Judge Arturo Zaldívar, addressed Villegas’ murder during the middle of a court hearing on June 16, using it as a call to better protect members of the judiciary. “We call on the appropriate authorities to guarantee the security of magistrates, federal judges, and their families,” he said, “and that they investigate and hold those responsible.”

In theory, all federal judges are to have armored vehicles and bodyguards for protection, writes Reforma. Based on initial media reports, however, it does not appear that Villegas and his family had such protection at the time of the attack. Such measures were likely warranted considering Villegas was the sitting judge on a high-profile case in 2018 that involved the son of the presumed leader of the notorious Jalisco New Generation Cartel (Cartel de Jalisco Nueva Generación, CJNG). Working then on Jalisco’s Federal Penal Processes as the Sixth Judge (Juez Sexto de Procesos Penales Federal), Villegas ordered the transfer of Rubén Oseguera González, “El Menchito,” to a federal maximum security prison (Centro Federal de Readaptación Social, CEFERESO). El Menchito was extradited to the United States in February 2020 to face drug trafficking charges. He was considered the CJNG’s second in command behind his father, Nemesio Oseguera González, “El Mencho,” who is also wanted by the United States for similar charges.

Otawka, Harper. “Mexican Federal Judge shot and killed while jogging in the city of Metepec.” Justice in Mexico. October 27, 2016. 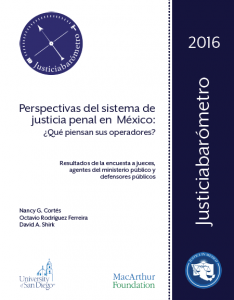 11/14/16 — (written by Kimberly Heinle) On November 14, 2016, Justice in Mexico, a research and public policy program based at the University of San Diego, released its latest report in the Justiciabarómetro series, Justiciabarómetro 2016 – Perspectives on Mexico’s Criminal Justice System: What do its operators think?, thanks to the generous funding of the John D. and Catherine T. MacArthur Foundation.

There are remarkably few surveys of judicial sector operatives in the world. The few that exist, like a recent survey in the UK, tend to rely on very small samples (< 5%). The 2016 Justiciabarómetro provides a comparative analysis of the justice system operators’ demographics and perspectives, as well as comparisons to similar data collected in 2010. Survey participants included 288 judges, 279 prosecutors, and 127 public defenders in 11 Mexican states, with a response rate of 56%, a 2.4% margin of error, and a 95% confidence interval.

With over 120 questions, the 2016 Justiciabarómetro documents judicial sector operators’ profiles and perspectives on a variety of topics, such as judicial system effectiveness, compensation levels, and attitudes toward Mexico’s recent problems with crime and violence. Importantly, the study finds that there have been changes in judicial attitudes toward recent reform efforts, including a notable increase in favorability among judges toward the use of oral, adversarial trial procedures introduced in June 2008 and implemented nationwide over an eight-year period.

According to Justice in Mexico Director David Shirk, a professor of the Political Science and International Relations at University of San Diego, “There has been ample speculation about how well the courts have been adapting to the 2008 reforms. This study helps show that judges and other judicial sector operators are making progress, but also documents some of the serious challenges that remain.” 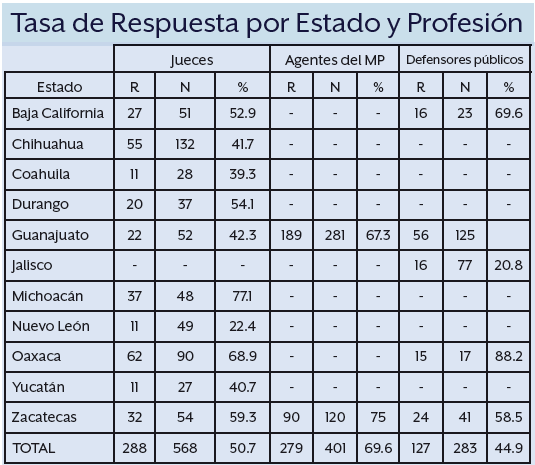 The study also includes findings on issues of growing concern, such as the frequently unreliable use of eye-witness testimony as evidence in court. The use of this practice in Mexico has been questioned by leading experts like Roberto Hernández, co-producer of the documentary film “Presunto Culpable” (Presumed Guilty) and an advisor on this study. According to the 2016 Justiciabarómetro survey, eyewitness testimony continues to be the most frequently used form of evidence provided in cases (68% of the time), followed by physical evidence (53%), and confessions (13%).