11/05/19 (Written by T McGinnis) – On October 17th, heavy fighting erupted in the Mexican city of Culiacán, Sinaloa after security forces detained Ovidio Guzmán López, the son of the jailed drug lord Joaquín “El Chapo” Guzmán. According to El País, authorities initially reported that they found Guzmán during a routine search and arrested him due to the significant role he has played in his father’s illicit activities. However, as noted by the Los Angeles Times, the story evolved rapidly. Mexican officials later acknowledged that the operation had been planned, but suggested that it was physically carried out by rogue security forces without proper authorization. In either case, authorities lacked a search warrant upon entering Guzmán’s property, calling the legality of the mission into question from the beginning. Following this blunder, the cartel launched a large attack in retaliation. As videos and pictures of dead bodies and families scrambling for shelter surfaced and subsequently flooded the media, the public watched as the death toll gradually rose in the days following the violence. Univision later confirmed on October 21st that at least 13 people were killed and dozens more were injured.

According to Milenio, in reaction to the violence, authorities ultimately freed Ovidio Guzmán López and retreated, subsequently defending this course of action by arguing that the most important objective remains to avoid the loss of human lives. President Andrés Manuel López Obrador spoke publicly regarding the matter stating, “We don’t want bloodshed. We do not want that. From anyone. We are also hurting with respect to the loss of the life of an alleged criminal. We are not oblivious to the pain caused by the death of any person.” Reiterating the position that his administration has taken from the outset, Obrador insisted that “you can’t fight fire with fire.” However, this response raised strong criticisms of López Obrador’s security strategy, which thus far has failed to quell Mexico’s rising tide of violence, which has reached more than 3,000 murders each month as noted by El Universal.

Indeed, critics charged that the cartel’s victory represented a stunning “humiliation” for the Mexican government. According to The New York Times, though Obrador rightly maintains that he inherited the problem of unchecked corruption, those who oppose the strategy of release and retreat utilized by the government last month argue that these actions send the wrong message and set a dangerous precedent. Cartels may now more strongly assume that through the leveraging violence, they can get their way and further their interests. Additionally, while the López Obrador administration may opt not to go after drug traffickers, vocal critics like Ioan Grillo point out that the drug “war does not stop even if the government is not attacking them.”

López Obrador has also been criticized for the lack of an effective security strategy, despite his efforts to build a new National Guard to restore order. Indeed, many members of the National Guard have been diverted from their public security role to focus on stopping Central American migrants from entering the United States. Meanwhile, López Obrador’s efforts have been beset by protests from federal law enforcement officers who object to the dissolution of their agency, the Federal Police, and their incorporation into the National Guard during the recent reorganization of security forces, as noted last month by Justice in Mexico. Engelbert Ruiz, a Federal Police Officer, commented that “What is really happening is that they are simply changing our uniforms [with] no explanations, clarity, no rights or guarantees.”

According to the Diario de Yucatán, compounding an already complicated set of internal tensions, “Mexican media outlets reported that elements in the army were unhappy with the outcome of Thursday’s debacle in Culiacán.” As noted by sources, such as Mexican News Daily, this rift between President López Obrador and military forces continued to grow in the days following the operation. On October 22nd, retired military general Carlos Gaytán gave a highly critical speech regarding the worrisome status of “today’s Mexico” under the Obrador administration. “…We cannot ignore that the head of the executive has been legally and legitimately empowered. However, it’s also an undeniable truth that fragile counterweight mechanisms have permitted a strengthening of the executive, which has made strategic decisions that haven’t convinced everyone, to put it mildly.” Though Gaytán never explicitly referred to the Culiacán operation, established sources within the military informed The Washington Post that the speech served as a response to the mission on behalf the armed forces.

However, other sources point out that the story of Ovidio Guzmán’s release remains subject to two very different interpretations. According to Consulta Mitofsky for El Economista, “in Sinaloa, 79% of the population and 53% nationally, considered that the federal government did the right thing by freeing Ovidio Guzmán López from the threat of the Sinaloa Cartel to attack the citizens.” The state of Sinaloa, the cradle of Mexican drug trafficking, is overwhelmed by the presence of crime and an ever-increasing tendency of cartels to use insurgent tactics to achieve their political aims, such as the use of roadblocks to hinder military reinforcement. Vladimir Ramirez, a political scientist in Culiacán, explained that although the gunmen did not intentionally target noncombatants initially, the menace posed by the cartel remained clear. The citizens of Sinaloa, who have been subject and well-exposed to cartel reign, recognized this. The usual elusive quality of cartel gunmen had, in this case, materialized; their visible and violent presence forcing families to hide in small, anxiety-provoking spaces as described by Televisa. “It was a threat of terrorism,” Ramirez said. “The government acted with great responsibility.” Additionally, El Universal reports that during the operation, Aguaruto prison experienced a breakdown in security, resulting in the escape of approximately 50 prisoners, most of whom originally forfeited their rights due to ties with organized crime. Additionally, many approve of the government’s strategy of release and retreat because according to Milenio, cartel hitmen threatened to kill hostage soldiers and their families if Guzmán remained held by authorities.

Moving forward, it remains to be seen whether the Mexican president will heed critics’ warnings by cracking down on drug traffickers or continue to pursue a self-described approach focused on “hugs, not gunfights” (abrazos, no balazos). Clearly, though, what occurred in Sinaloa on October 17th has increased pressure on the López Obrador administration to develop a coherent and effective strategy to reduce both violent crime and the threat of Mexico’s powerful organized crime groups.

Discover the important headlines in Mexico from February 2018. 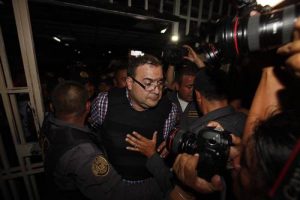 On the morning of February 8, 2018 in Xalapa, Veracruz, 13 police officers were taken into custody due to allegations of involvement in over 54 forced disappearances. These forced disappearances were instances of imprisonment by the government that predominantly occurred during the tenure of former Veracruz governor, Javier Duarte (La Jornada). Duarte is currently detained and accused of being involved in organized crime, embezzlement and corruption. Previous to his arrest on April 16, 2017, he was hiding in Guatemala for almost six months (BBC).

Moreover, there are reports of an elite police force in Veracruz, headed by former director of Veracruz State Police, Roberto González Meza, that illegally detained civilians suspected of being involved with “Los Zetas”(Proceso). Among the 13 police officers arrested was former Veracruz Public Security Secretariat (Secretaría de Seguridad Pública, SSP), Nava Holguín and Arturo Bermúdez Zurita. It has been reported that during Duarte’s six-year term there were up to 200 cases of forced disappearances in Veracruz (La Jornada). 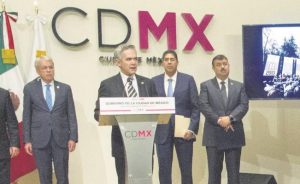 On February 16, 2018, José Eduardo Zamora “El Cholo” was arrested for being linked to the Tláhuac Cartel in the municipality of San José de Iturbide in the state of Guanajuato (Milenio). Zamora was captured in a joint operation between the Investigative Police (Policía de Investigación, PDI) and local police department (Excelsior). He is the alleged successor of Felipe de Jesús Pérez Luna “El Ojos”, the previous leader of the Tláhuac Cartel, who died in November of 2017.

Zamora was detained in 2013 and 2016, respectively for street-level drug dealing and destruction of property. In both cases, he was released on a judge’s order. Authorities say that Zamora held a significant role in the  distribution of drugs in the southeast region of Mexico’s capital. In addition, Zamora is allegedly linked to the homicide of an ex-commander of the Mexico City municipal police in Iztapalapa in February of 2016. As of August 2016, 74 people involved with the Tláhuac Cartel have been arrested (El Universal). 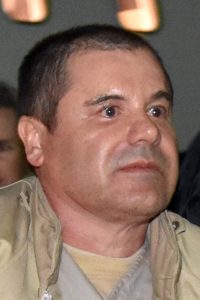 New York federal judge Brian M. Cogan has ordered that the jury taking part in Joaquin “El Chapo” Guzmán’s upcoming trial in September will be anonymous and partly sequestered, citing potential danger to the jurors. Guzmán is facing 17 charges, which include leading a criminal enterprise, producing and exporting wholesale amounts of narcotics across the U.S.-Mexico border, and ordering the targeted assassinations of people associated with  rival organized crime groups (LA Times).

Cogan cited Guzman’s history of violence as the main reason concealing the identities of the jurors. In addition, the selected jury will be under the protection of federal marshals throughout the duration of the trial, which is anticipated to last three to four months (NY Times). Guzmán’s lawyer, A. Eduardo Balarezo, countered that the judge’s order would give the jurors an unfairly perceive Guzman as a threat. Balarezo believes that keeping the jury anonymous will undermine the presumption of innocence, causing them to form a prejudiced opinion before listening to any evidence. “El Chapo” has a history of interference with the judicial processes in Mexico, prompting strict legal procedures following his extradition to the  United States (NY Times).