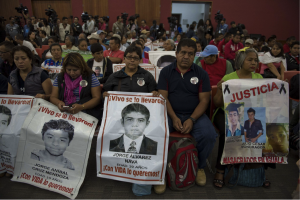 Family members and friends of missing Ayotzinapa students wait for an international panel of experts to presents its findings.
Source: New York Times

9/18/15 (written by rkuckertz) – An international panel of experts appointed by the Inter-American Commission for Human Rights recently released a report contradicting the Mexican government’s official account of how 43 students from the Ayotzinapa Rural Teachers’ College disappeared last September near Iguala, Guerrero. According to the report, elements of the government’s explanation of the tragedy are inconsistent with scientific evidence procured by the panel of experts.

The report illuminates inconsistencies with the federal government’s version of these events—an account they claimed to be the “historical truth” this past January. According to the government’s narrative, municipal police in the state of Guerrero attacked several buses in various locations that carried as many as one hundred students in total. Following a shootout in which six people were killed, the 43 students were handed off to members of a local drug-trafficking gang, Guerreros Unidos, before being transported in trucks to a trash dump in Cocula, Guerrero. According to the January account, fifteen of these students were already dead upon arrival to the site and the remaining students were then executed. The government maintains that the remains were then incinerated and tossed into the nearby San Juan River.

The Inter-American Commission for Human Rights’ report has noted several large disparities between this account and evidence retrieved throughout the course of the investigation. For instance, the panel determined that it is “scientifically impossible” that the remains of the missing students were incinerated at the Cocula trash dump—a fact that the federal government claims to be true.

Following the report’s release, President Enrique Peña-Nieto tweeted that he had instructed members of his cabinet to support the ongoing investigation into the events occurring near Iguala. The Attorney General also extended the panel’s ability to remain in Mexico in order to continue its search for a true account of what happened to the missing 43 students. This response is uncharacteristic of past government reactions to the crisis. Rafael Fernández de Castro Medina, a foreign policy adviser to former President Felipe Calderón, states that “the strategy for Ayotzinapa has been do not rock the boat and let the popular indignation run its course.” However, experts such as New York Times foreign correspondent Azam Ahmed believe that the government’s unprecedented reception of the new report may suggest that the government is beginning to accept a role of responsibility in the events occurring near Iguala last year. A senior member of Peña-Nieto’s cabinet reported the president saying, “we need to do things different.”

Meanwhile, experts at the University of Innsbruck in Austria have recently identified a second set of remains to be one of the missing Ayotzinapa students, Jhosivani Guerrero de la Cruz. Jhosivani would now be twenty years old and wanted to teach in the community of Omeapa, Guerrero. His remains were identified through the analysis of bone fragments reportedly recovered from the San Juan River. The Argentina Forensic Anthropology Team (Equipo Argentino de Antropología Forense, EAAF) identified the first set of remains this past December as belonging to Alexander Mora Venancio, another Ayotzinapa student. Although EAAF did confirm the identity of these remains, they also indicated that they were not involved in the discovery of the bone fragments used in their DNA analysis. Consequently, the team of Argentine experts could neither confirm nor deny that the fragments were recovered from the San Juan River, as the Mexican government asserts. The expert panel appointed by the Inter-American Commission for Human Rights also asserts that physical evidence collected at the dumpsite failed to support the government hypothesis that the remains were cremated there.