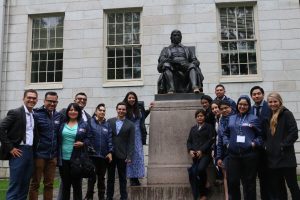 OASIS Boston participants next to a statue of John Harvard, one of the Founders of Harvard College

Study trip participants had the opportunity to visit both federal and state courts in Boston. They were able to engage with federal judges and defense attorneys to gain insight from both sides of the courtroom. Aside from visits and discussions, participants were able to learn training skills to disseminate oral trial techniques. OASIS Instructor Peter Mitchell from the Legal Aid Society Criminal Defense Division in New York City led a “Train the Trainer” session on teaching oral trial skills. Mr. Mitchell guided the participants through the training, allowing participants to practice oral trial techniques and learn to provide effective critique and feedback. 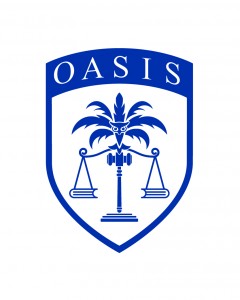 This OASIS study trip was made possible by a grant from the U.S. State Department’s Bureau of International Narcotics and Law Enforcement as part of the Mérida Initiative. During their two weeks in Boston, the UNAM visitors participated in a series of workshops with Harvard law professors Alex Whiting and Phil Heymann, as well as special sessions with trial judge William Young, prosecutors Jordi de Llano Stephen Heymann, and Fred M Wyshak Jr., and criminal trial and appeals attorney Martin G. Weinberg.

Participants toured Harvard Law School and watched a specially edited version of the 1970s ABC documentary, “The Shooting of Big Man: Anatomy of a Criminal Case,” based on a Harvard law research project. The documentary shows events in the criminal justice system normally hidden from the public: numerous jailhouse sessions between the defendant and his public defender attorneys; the preparation of the case by defense, police and prosecution; and interviews with witnesses and the victim. It culminates with the jury trial and verdict.

Discussions following the film focused on such topics as the different role the police statement plays in a criminal trial in Mexico, as well as questions regarding how evidence can be withheld from the jury. Participants reflected on the question of whether the adversarial system is more concerned with winning than it is with justice, and on some of the achievements and limitations of the U.S. criminal justice system today.

Harvard Professor of Practice Alex Whiting participated in multiple sessions with the UNAM visitors, explaining the pretrial and trial processes, the role of the jury, the process of discovery, techniques for preparing witnesses, methods for providing an effective cross-examination, how to examine plea agreements, and other aspects of the U.S. adversary system.

Professor Whiting explained that U.S. trial proceedings constitute a system of discovery in which the parties (defense attorney, prosecutor, jury) are forced to get to the “truth” of a case together, albeit in a manner that creates checks and balances through an adversarial process. In the pretrial phase, the merits of the criminal investigation are tested by the prosecutor, defense attorney and judge. During the trial, the evidence produced by that investigation is then tested by these same parties before a jury. This system operates in contrast to Mexico’s mixed, inquisitorial system, in which the prosecutor plays a primary role in representing the “truth” to the judge, with a less prominent role for the legal counsel of the accused.

Deputy Chief of the Criminal Division for the United States Attorneys Office for the District of Massachusetts Stephen Heymann and Harvard Professor Philip Heymann discussed with participants the Brady v Maryland (1963) case, the process of conducting an investigation, and the obligations of the government to provide exculpatory evidence to the defendant during the discovery process. Exculpatory evidence is evidence that is favorable to a defendant in a criminal trial, in that it exonerates or tends to exonerate the defendant of guilt.

The Brady case was a landmark US Supreme Court case in which the prosecution had withheld from the criminal defendant certain evidence. The defendant challenged his conviction, arguing it had been contrary to the Due Process Clause of the Fourteenth Amendment. Much of the discussion in this session touched upon the investigative techniques prosecutors and police must use as well as what can go wrong. Participants were given a hypothetical situation in which the prosecutor finds out someone is going to be killed. Should the prosecutor warn the person and compromise the investigation or not say anything? 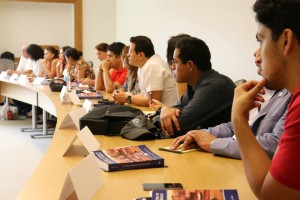 While in Boston, the UNAM faculty and students also visited the federal courthouse to attend a sentence hearing and to meet with presiding federal trial judge William Young in his chambers. Participants were able to meet with Judge Young before the sentence hearing and debriefed with him afterwards. Judge Young explained to participants that he gives a sentence based on a defined process and that sentencing is the hardest part of being a judge. As Judge Young explained there are four common goals of sentencing: retribution, specific deterrence, general deterrence, and rehabilitation. With each sentence issued, a judge strives for a combination of these four goals.

Criminal trial and appeals attorney Martin G. Weinberg spoke to participants about the role of the defense lawyer. As Martin said in class, the constitutional rights of the accused are on the shoulders of the criminal defense lawyer. The defense lawyer is creating a counter-narrative of the facts presented by the prosecutor. For Martin, the accused are extremely vulnerable and he identifies the three roles of the defense lawyer as to defend the rights of the guilty; 2) fight for their constitutional liberty; and 3) fight for the innocent. Professor Philip Heymann moderated the discussion and asked Martin questions regarding when the defendant should take the stand as well as what Martin asks of the jury in a closing argument.

Assistant US Attorney Fred M. Wyshak Jr. also met with the UNAM participants to discuss public corruption cases and the guidelines FBI agents must now follow when handling informants. Mr. Wyshak, a prosecutor who has been at the helm of some of the higher-profile criminal cases in federal court in recent years, heads his office’s public corruption and special investigations unit. In particular, he discussed the case of the United States v. Bulger (1972) to highlight what can go wrong when FBI investigators become corrupted by the mob. It was a trial three decades in the making; the trial of James “Whitey” Bulger, the South Boston mobster charged with 19 murders and operating his own army of paid-off FBI agents, state troopers, and Boston police who protected him instead of his victims for 20 years beginning in the 1970s.

Professor Heymann concluded the two-week study trip with a seminar on adversarial criminal procedure in the U.S. and how it will be implemented in Mexico. Using the Socratic method, Professor Heymann called on participants and engaging them in an active discussion. As Professor Heymann emphasized in this discussion, part of the purpose of exploring the U.S. trial system in detail over the course of the two week visit is also to consider ways to avoid future problems in new system in Mexico. The discussion also emphasized the fact that written law is not sufficient to dispel the culture of corruption that currently exists and that the commitment and convictions of the operators of Mexico’s new criminal justice system will be essential to transform this culture. 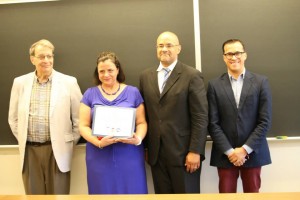 The two-week workshop concluded with a formal ceremony attended by Dr. María Leoba Castañeda Rivas, the dean of the UNAM law school, who praised the excellent program organized by Dr. Heymann, as well as the earnest and active participation of the UNAM faculty and students. Dr. Castañeda stressed the importance of the seminar for strengthening the UNAM’s capacity to assist in the education and training needed for the implementation of the new criminal justice system in Mexico.