07/24/19 (written by kheinle) — The first contingent of Mexico’s National Guard (Guardia Nacional) was officially deployed to the streets in late June. Created from the ranks of the Mexican military and police, the National Guard will serve as a means to combat the country’s ongoing challenges with organized crime and violence. The deployment came seven months after President Andrés López Manuel Obrador took office in December 2018 and three months after Mexico’s Congress approved the force in March 2019. The National Guard is projected to grow to be 140,000 members.

Deployment of the National Guard 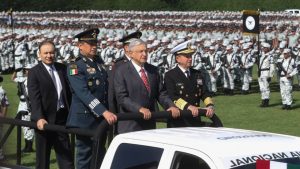 Six thousand National Guard agents were initially sent to Mexico’s southern border with Guatemala. They are there to assist with the increasing flow of migrants crossing into Mexico from Central America. As The Associated Press noted, the deployment came “as Mexico [put] into effect a deal on irregular immigration reached with Washington to head off stiff tariffs that President Donald Trump threatened to slap on all imports from Mexico.”

The heated rhetoric between the United States and Mexico regarding tariffs and immigration has since quieted for the time being. Yet the debate over Mexico’s National Guard has not. Critics continue to express concern over the agency’s formation, its effect on the Police, and its respect of human rights.

Criticism of the National Guard 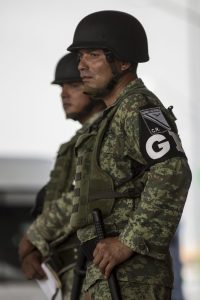 As Justice in Mexico wrote in December 2018, criticism of the force emanates at the local, national, and international levels. Congresswoman Lucia Rojas, for example, argued that the National Guard would only deepen the military-focused strategy already in Mexico. “…[I]t’s become clear in the last 12 years,” she said, “that there’s absolutely no evidence that having the army on the streets helps to reduce the violence.”

Similarly, UNICEF Executive Director Henrietta Fore acknowledged that, at least pertaining to the flow of migrants to Mexico’s southern border, the National Guard is not the cure. “Unless the root causes of these migration flows are addressed, the situation is unlikely to change,” said Fore. That parallels ongoing criticism of the government’s willingness to involve the military in domestic affairs, a practice that is regularly discouraged. The blurring of the line between roles and responsibilities among the military, police, and now the National Guard will be worth monitoring.

Mexico’s Federal Police (Policía Federal, PF) has been in the center of the debate over the National Guard, as the former will be fully integrated into the latter over the next 18 months. The Police have been very critical of the National Guard’s formation and the effect it will have on the police agents themselves. Their concerns include officers’ pay and benefits if they transfer, job stability and security, and the effect of deployment on their families back home, reports The New York Times. One Federal Police officer, Engelbert Ruiz, commented that “What is really happening is that they are simply changing our uniforms [with] no explanations, clarity, no rights or guarantees.” 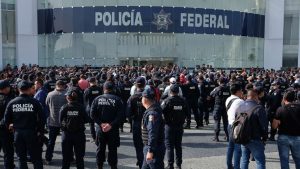 Tensions erupted in early July when Federal Police in Mexico City took to the streets. Protests included press conferences, blockades on one of the main highways in Mexico City, and several hundred officers barricading themselves in the police command center. They also signed a petition “in favor of legality and justice” that laid out the Federal Police’s demands for just pay and treatment as they integrate into the National Guard. In addition, more than 4,000 agents signed on to an amparo, or court injunction, demanding the protections of their rights throughout this process.

President López Obrador has been critical of the police force’s discipline and entanglement with corruption. He pointed to the protests as a sign that they lack discipline. “We have always said that this police force has been going bad, and what happened yesterday,” he said, referencing the protests, “is evidence of that.” Still, the López Obrador administration, including Secretary of Security and Civilian Protection Alfonso Durazo Montaño, continue to stress that police officers “joining the National Guard will be able to retain their rank, bonuses and benefits.” Durazo has been working with the police to address and satisfy their demands, on which he reported progress and agreements as of July 9, according to El Economista.

Military involvement in domestic affairs raises concern, particularly with regards to the potential increase in human rights violations perpetrated by members of the military against civilians. As it was, just days after the National Guard took to the streets in Mexico, three agents were arrested for allegedly kidnapping a 14-year-old in the State of Mexico (Estado de México, Edomex). They are thought to be a part of a larger kidnapping gang that authorities in Edomex and Guerrero were tracking.

The likelihood of such incidences occurring pushed Congress to establish human rights protocols and protections as they debated the force’s approval earlier this year. This included constitutional changes that “would mean that national guard members receive human rights training, are tried by civil courts and will not be able to move detainees to military institutions,” writes Reuters. If agents want to join the National Guard, they must now participate in a seven week training. This is a step in the right direction to curtail human rights violations. However, the Mexican Government ought to continue prioritizing human rights protections amidst the National Guard’s rollout.