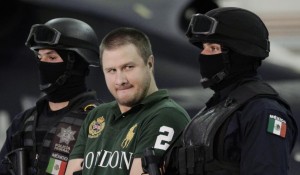 10/01/15 (written by alagorio) – On September 30, 2015 thirteen defendants were extradited to the United States. Among the thirteen were two top drug lords, Edgar Valdez Villarreal, known as “La Barbie”, and Jorge Eduardo Costilla Sánchez, known as “El Coss”. The extradition demonstrates the increased collaboration between the U.S. government and the Peña Nieto administration. Originally in Mexico there were numerous objections to extraditing criminals to the United States. Nevertheless, the current extradition signals that there is the hope for a more open security policy between Mexico and the United States in the future.

After the extradition was announced, U.S. Attorney General Lorreta Lynch expressed that, “Today’s extraditions would not have been possible without the close collaboration and productive relationship the Department of Justice enjoys with officials at the highest levels of law enforcement in Mexico”. The collaboration has helped foster further dialogue between U.S. and Mexican law enforcement to seek justice for crimes such as, drug trafficking and murder that have occurred in the U.S. Nevertheless, there are still some open-ended questions to answer that explain the future for the shift in the extradition process. For example, BBC Mundo cites that there are some detainees who were extradited that did not have any criminal charges against them.

Valdez of the Beltrán Leyva cartel is a U.S. citizen who was born in Texas. Author Azam Ahmed of The New York Times explains that the most serious charges against Valdez are murdering an American Consulate worker and an immigration and customs agent. Also, Valdez is responsible for contributing to some of the most gruesome violence in Mexico, which includes, beheading rival gang members and videotaping executions. He is wanted in Louisiana and Georgia for drug related crimes but remained incarcerated in Mexico since 2010. His extradition will allow the United States to carry out the charges against him, especially for the cases of murdered U.S. workers.

The extraditions expose a powerful pivot in the original platform of the Peña Nieto administration’s denial of extraditing criminals to the United States. As reported by The New York Times, since 2012 Peña Nieto has been a strong opponent of letting the U.S. government be too involved in security matters. Nevertheless, the Mexican government felt an extreme pressure to work with the U.S. after the prison escape of “El Chapo” Guzman three months ago. Guzman’s escape caused a greater call for the U.S. to be allowed to try and imprison some of the most dangerous drug lords in Mexico. Also, the prison break showed that the Mexican prison system can be easily corrupted and that it is not able to maintain high-level prisoners.

The Mexican governments extradition of the thirteen detainees demonstrate that a new chapter in the relationship between the U.S. in Mexico has begun. After the escape of “El Chapo” Guzman the Mexican government has experienced international pressure to extradite criminals that the prison system cannot house effectively. In light of this, the United States government is helping Mexico secure the most wanted criminals in both countries.