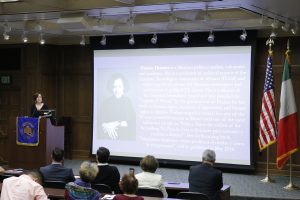 Dr. Denise Dresser presenting at the University of San Diego on May 8, 2018

05/15/18 (written by Lucy La Rosa)- Last week, Justice in Mexico was honored to host Dr. Denise Dresser, a renown Mexican political analyst, columnist and academic, to speak on the upcoming presidential elections in Mexico. The event, “Discussing the 2018 Mexican Presidential Election,” gave a comprehensive snapshot of the context and challenges relevant to Mexico’s presidential candidacy. Held on the USD campus, Dr. Dresser’s presentation was attended by approximately 90 students, professors, government officials, media representatives and members of the general public from the San Diego/Tijuana region.

Dr. Dresser’s work is primarily centered on Mexican democratization, corruption, the construction of citizenship and political economy issues from a comparative perspective. She is a professor of political science at the Instituto Tecnológico Autónomo de México (ITAM). She writes a political column for the Mexican newspaper, Reforma, and Proceso magazine. She also participates in the weekly political roundtable hosted by Carmen Aristegui and the political talk show “Es la Hora de Opinar” hosted by Leo Zuckerman. Dr. Dresser is a winner of the National Journalism Award and was awarded the “Legion of Honor” by the government of France for her work on human rights, freedom of expression and human rights in Mexico. Forbes magazine named her one of the 50 most powerful women in Mexico and one of the most influential people on Twitter. She is the author of the bestselling El País de Uno, reflexiones para entender y cambiar a México. Her forthcoming book, Manifiesto mexicano: cómo perdimos el rumbo y cómo lo recuperamos, will be published in May 2018.

To frame her political analysis of the 2018 presidential elections, Dr. Dresser began by outlining the public sentiments surrounding Mexico’s sitting President, Enrique Peña Nieto, and the impending conclusion of his term. She highlighted the unfavorable ratings of both Peña Nieto and his affiliated Institutional Revolutionary Party (Partido Revolucionario Institucional, PRI) due to a variety of tarnishing corruption scandals. Dresser noted that the current political climate features a disgruntled citizenry looking for an end to systemic issues of crony capitalism, rent-seeking elites, corruption and impunity.

Following this frame of reference, she outlined the political background and current opinion poll rankings of the following presidential candidates: Jose Antonio Meade, Ricardo Anaya, Margarita Zavala, and Andres Manuel López Obrador. She probed the intentions and track record of each political candidate, respectively analyzing their party platforms and proposals for change in Mexico. In her thorough appraisal of each candidate, Dr. Dresser emphasized the candidates’ proposed solution to the challenges facing Mexico’s democratic functionality. She specifically underlined candidates’ response to structural issues of corruption and impunity.

Dr. Dresser, in reference to scholar Guillermo Trejo, agreed that regardless of which candidate wins the presidential seat, Mexico needs an “accountability shock.” She highlighted the need for candidates to address the issues perpetuated by an ineffective judicial system and a lacking “institutional design”. Moving forward, she argued, Mexico and its presidential candidates need to focus on strengthening rule of law in Mexico and improving a fight for civil rights. Accordingly, she reasoned that the candidates’ political background and action plan for addressing these challenges should be at the forefront of voters’ judgements on election day.

Bringing her political discourse to a close and in a final reference to Mexico’s need for greater political accountability, Dr. Dresser concluded, “If we don’t look up, those who aspire to govern us won’t do so.” 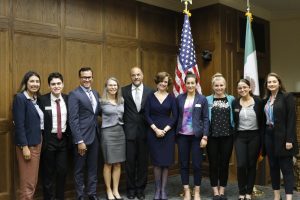 The Mexican presidential elections will be held on July 1, 2018. Voters will elect a new president, 128 senators, and 9 governors for 6-year terms, 500 federal deputies, 982 local deputies, 1,612 mayors for 3-year terms and a number of other municipal level positions. Approximately 88 million Mexican will be eligible to cast their vote for a total of 3,416 federal, state and municipal positions, one of the largest elections in Mexican history. For an extensive and intelligible overview of the upcoming elections, electoral processes, candidate and party platforms, Justice in Mexico highly recommends the 2018 Elections Guide by the Wilson Center’s Mexico Institute.

Justice in Mexico would like to thank Dr. Denise Dresser for her time and commitment to Mexico’s democratic development, as well as thank all of those who attended and supported the implementation of the event.

The earthquake, which occurred late Thursday night, was the strongest earthquake to hit Mexico in the last century. The earthquake struck in the southern Mexican state of Chiapas, approximately 75 miles southwest of the town, Tres Picos. At least 26 people have died across Mexico and a tsunami warning is in effect for the southern coasts of Mexico, Guatemala, El Salvador, Costa Rica, Nicaragua, Panama, Honduras, and Ecuador. In order to inspect for structural damage, President Enrique Peña Nieto closed schools in both Chiapas and Mexico City.