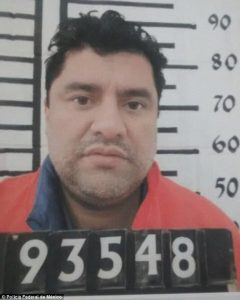 03/06/17 (written by Matteo Bucalossi) –  The son of “El Azul”, a top leader of the Sinaloa Cartel escaped from prison with four other drug suspects on March 16, 2017 in Culiacán, Sinaloa. The fugitive has been identified as Juan José “El Negro” Esparragoza Monzón, son of Juan José “El Azul” Esparragoza Moreno. “El Azul” was a leader of the Sinaloa Cartel along with Joaquín “El Chapo” Guzmán and Ismael “El Mayo” Zambada. “El Chapo” was extradited to the United States this year and is now facing a 17-count indictment in a federal court in New York. In addition,“El Mayo’s” whereabouts are still unknown and the FBI has posted a $5 million reward for information on him. According to Daily Mail, rumors alleged that “El Azul” died in 2014 from a heart attack. However, this has not been confirmed by authorities.

As reported by ABC News, Sinaloa assistant secretary of public safety, Cristóbal Castañeda Camarillo, declared that the inmates escaped the state prison during visiting hours. After a 911 call reporting that someone had been wounded inside the prison, the alarm sounded at 12:30 p.m. on Thursday, March 16. The federal search operation that began two hours later did not locate the fugitives. In addition, the Culiacán prison head of security, José Mario Murillo Rodríguez, has been missing since the escape, according to the secretary of public safety Genaro Robles Casilla. Castañeda addressed the possibility that they could have escaped with the aid of prison personnel and may have been hidden in vehicles.

The fugitives are believed to be connected to the Sinaloa Cartel and play significant roles within the organization. “El Negro” is suspected of running a drug distribution network and managing cartel finances. According to Milenio, he has been recently accused of instigating violence in Mexicali and Tijuana, . As reported by Justice in Mexico, he was arrested on January 19 while carrying three firearms, a sizeable amount of cocaine, and communication equipment.

Francisco Javier Zazueta Rosales, alias “Pancho Chimal”, is suspected to be the chief of sicarios (or hitmen) for “El Chapo”. He allegedly ordered and participated in the ambush that killed five Mexican soldiers in Culiacán on September 30. Jesús “El 20” Peña González is believed to be the security chief for “El Mayo”. Alfredo “El Limón” Limón Sánchez is a confidant of “El 20”. Rafael Guadalupe Félix Núñez, alias “El Changuito Ántrax”, is a financial operator in Los Ántrax, an armed group aligned with the cartel.

Authorities petitioned the courts to transfer the suspects to separate maximum-security federal prisons. “El Negro” is considered one of Mexico’s 122 priority criminal suspects and the United States has requested his extradition. However, the prisoners have won court injunctions against these requests. As reported by Business Insider, the order for “El Negro” was granted on January 23rd by a judge in the fourth district of Sinaloa, while federal authorities had issued orders of interim protection to extradite him. “Pancho Chimal” was granted the same order by the same judge on February 21st.

The effects can already be seen in the state of Sinaloa. An internal fight between cartel members is taking place on the streets of the state. According to Business Insider, in early February, two sons of “El Chapo” and “El Mayo” were reportedly ambushed by another high-ranking member, Dámaso López Serrano, son of the founder of Los Ántrax, Dámaso López Núñez. 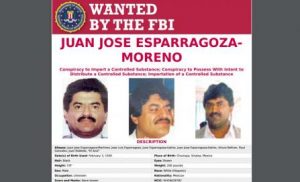 El Negro was one of the top 122 individuals the Peña Nieto administration identified as priorities to capture. El Universal reports that his arrest was the 106th such suspect to have been taken down since President Enrique Peña Nieto took office in 2012. El Negro allegedly played a significant role in the Sinaloa Cartel’s operations. Authorities say he was actively involved in the cartel for over 20 years, and he currently oversaw a drug distribution network and the cartel’s finances. According to Renato Sales Heredia, the head of the National Security Commission (Comisión Nacional de Seguridad, CNS), El Negro was responsible “for the wave of violence in Mexicali and Tijuana, Baja California.” Reports indicate he was arrested while carrying three firearms, a sizable amount of cocaine, and communication equipment.

El Negro’s father, El Azul, is an alleged leader of the Sinaloa Cartel alongside El Chapo Guzmán and Ismael “El Mayo” Zambada. With his extradition, Guzmán now faces 17 charges of organized crime, murder, and drug trafficking in New York, whereas Zambada’s whereabouts is still unknown. El Azul, meanwhile, reportedly died of a heart attack in 2014, although his death was never confirmed. The U.S. Federal Bureau of Investigation (FBI) still has a $5 million reward for information leading to El Azul’s arrest, while the Mexican Attorney General’s Office (Procuraduría General de la República, PGR) has an award of $30 million pesos. El Azul has often been considered a quieter, more discreet leader doing more behind the scenes to support the Sinaloa Cartel’s operations than his counterparts, Guzmán and Zambada.

The impact of Guzmán’s extradition and El Negro’s arrest on drug trafficking and “the wave of violence” in Baja California caused by the latter are yet to be seen.

“Key leader in Sinaloa Cartel believed to have died from heart attack.” Justice in Mexico. June 12, 2014.