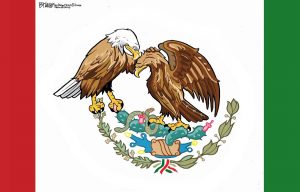 9/21/17- (written by Lucy Clement La Rosa) On Tuesday, September 19th, a magnitude 7.1 earthquake struck southern Mexico once again, about 90 miles outside of Mexico City. Currently, at least 237 people are dead and almost 2,000 people are wounded. Tuesday’s earthquake follows a magnitude 8.1 earthquake on September 7th in Oaxaca, Mexico that killed nearly 100 people. The most recent seismic event is Mexico’s deadliest earthquake since 1985.

The earthquake caused significant structural damage, destroying over 50 buildings in Mexico City alone. These buildings included schools and apartment buildings, which significantly contributed to the number of victims. Since Tuesday afternoon, rescue workers and volunteers have dedicated significant resources to locating individuals trapped under debris. Several Latin American countries, such as Panama and El Salvador, as well as the United States, Spain, Japan and Israel have dedicated man-power or technical assistance to these relief efforts.

Justice in Mexico stands in solidarity with the victims, colleagues, friends and families, affected by the earthquake. Justice in Mexico extends our sincerest gratitude and respect to the rescue workers who have responded to the crisis. We encourage you to look into any of the subsequently named charities who have launched donation funds for Mexico’s recovery; including U.S. charities, such as the International Community Foundation (ICF), Catholic Relief Services (CRS)  Project Paz and local Mexican organizations, such as, OxFam Mexico and Topos. Another notable donation opportunity was established by the Mexican Red Cross, by means of an Amazon Wish List for items essential to the organization’s relief efforts.  These links will also be displayed below.

In times of unprecedented tragedy, Justice in Mexico is heartened to see the good will and compassion behind the country’s convalescence. In the words of President Enrique Peña Nieto, “If anything distinguishes Mexicans, it is our generosity and fraternity” (Reuters).

The earthquake, which occurred late Thursday night, was the strongest earthquake to hit Mexico in the last century. The earthquake struck in the southern Mexican state of Chiapas, approximately 75 miles southwest of the town, Tres Picos. At least 26 people have died across Mexico and a tsunami warning is in effect for the southern coasts of Mexico, Guatemala, El Salvador, Costa Rica, Nicaragua, Panama, Honduras, and Ecuador. In order to inspect for structural damage, President Enrique Peña Nieto closed schools in both Chiapas and Mexico City.