03/18/21 (written by scortez) – On March 1, Mexican President Andrés Manuel López Obrador, nicknamed AMLO, met virtually with U.S. President Joe Biden to discuss cooperation on several key issues. Among them was immigration, which along with drug trafficking, AMLO had also discussed the day prior to with U.S. Secretary of State Antony Blinken. These conversations highlight a greater move by both administrations to cooperate on such pressing issues.

A Gradual Shift Away From Trump-Era Policies

The bilateral meeting represents a shift in cooperation between the two countries around the issue of immigration. The Biden Administration has already made several key changes in the United States’ approach to immigration since taking office in January 2021. For example, after the meeting between AMLO and President Biden, the United States committed $4 billion in aid to development projects in Central America to quell the overwhelming migration flow that is impacting both countries. In February, the Biden Administration also ended the Trump-era policy of “Remain in Mexico” and restored the asylum system process that had existed for decades. At the U.S. border asylum seekers are now beginning to be processed and admitted into the country after waiting in Mexico. Previously, human rights groups had criticized the “Remain in Mexico” as subjecting asylum seekers to further brutality as they waited for entrance into the United States. The Biden Administration is also supporting a bill that will grant temporary legal status to 11 million undocumented immigrants already living in the United States. The proposal would provide a pathway to citizenship to recipients of the Deferred Action for Childhood Arrivals (DACA) as well as other temporary programs. As well as, restoring and expanding programs for refugee and asylum seekers that the Trump Administration effectively tried to prevent from entering.

On the other hand, as reported by the New York Times, the Biden Administration has kept other Trump policies that empower the U.S. Customs and Border Patrol agents to rapidly expel new arrivals at the borders. Additionally, the U.S. Congress weighed in when it drafted a letter urging the Biden Administration to take on a bilateral agenda that focused on the protection of migrants, citizen security, and human rights. The letter reintroduces the conditions that asylum seekers hope to escape abhorrent conditions only to face new difficulties awaiting the status of their application. Recently, Human Rights Watch released a report chronicling the experience of asylum seekers left abandoned in Mexico who have become victims of extortion and kidnappings by Mexican authorities and criminal groups. The HRW report states that under the Remain in Mexico policy, there have been 1,100 reported cases of murder, rape, kidnapping, torture, and assault of asylum seekers while waiting at the border. Elected officials and advocacy groups like Human Rights Watch continue to put pressure on the Biden Administration to improve the conditions for migrants along the Southern Border.

Most recently, officials from both countries discussed key aspects of their cooperation on narcotrafficking. Mexico has already enacted changes to the cooperation with the United States on counternarcotics by revoking the diplomatic immunity of Drug Enforcement Administration (DEA) agents after it was discovered that they were using shared intelligence to arrest Ex-Defense Minister Salvador Cienfuegos without alerting Mexican officials. This event was seen by both sides as hampering their cooperation efforts on the ever urgent issue.

As Bloomberg reports, the senior director of the Western Hemisphere on the National Security Council, Juan González, commented in early March on a call between officials regarding the tactics used to combat organized crime groups. González noted that in recent years, the tactics employed have not produced the results that both sides were seeking. He urged for new tactics to be adopted González did not specify which tactics in question, but he did add that aspects of the bilateral Merida Initiative do not adequately address other issues, like money laundering, cracking down on the production and distribution of precursor chemicals, and China’s role in fentanyl through Mexico. What more, Mexican officials have been pushing to include tactics to quell arms trafficking from the United States, which has played an important role in fueling the unprecedented levels of violence in Mexico.

In 2020, the United Nations released a report that showed the unprecedented number of arms being trafficked from the United States to Mexico. According to the report, at the U.S.-Mexico border, traffickers pushed through small arms in fewer quantities, which account for 60 to 70 percent of all arms seized in 2016-17. This is in contrast to the worldwide flow of arms trafficking which was at a higher number of quantities in that same year. It is suspected that this form of “ant-trafficking” is a method to avoid seizures at the border. Under the current initiative, there is no coordination to counter this method of trafficking across the border into Mexico. To read more on the U.N.’s report, click here.

These conversations mark a shift in direction from previous years for bilateral cooperation on the most urgent issues facing the two countries. AMLO and Biden have both agreed that the overwhelming number of migrants at the border needs to be controlled. While the conversations have yet to materialize into tangible bilateral agreements, they foreshadow a different direction the two countries will take on mitigating migration and narcotrafficking.

“Global Study on Firearms Trafficking in 2020.” United Nations Office on Drugs and Crime. 2020.

January 25, 2019- In his first primetime Oval Office address, President Donald Trump called on Congress to address what he called a “growing humanitarian and security crisis” at the United States’ southern border, spawned in part by the recent arrival of a caravan of 6,500 migrants from Central America’s Northern Triangle region.[1] In her paper, titled “Immigration and National Security: An Empirical Assessment of Central American Immigration and Violent Crime in the United States,” Daphne Blanchard examines the extent of the potential threat by gathering quantitative data of previous Central American migration flows and the impact they have had on violence in American communities. The author contends that as rhetoric from high-level politicians and news media makes connections between violent crime and immigration, political parties’ stances on immigration become more divergent — leading to the inability to agree on comprehensive immigration reform. Not only does this research add to the understanding of the potential threat of these particular migrants to U.S. communities, its findings can be generalized to the overall public debate of the nature of immigration and national security. 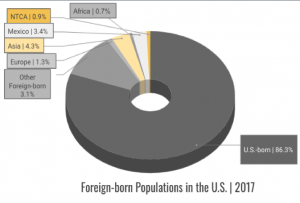 Ms. Blanchard found that Central American migration has been hyperinflated in scope and potential for insecurity. Migrants from the Northern Triangle of Central America (NTCA) region, formed by El Salvador, Guatemala, and Honduras, have indeed surged over the past two decades–their numbers more than double the estimated 1.5 million people from that region in 2000–and the number of unaccompanied minors and families crossing the US-Mexico border has dramatically increased since 2008.[2] However, the author argues the importance of putting their numbers in perspective, noting that this subset of immigrants constitutes less than one percent of the share of the overall U.S. population.

The evidence compiled by Ms. Blanchard suggests that the surge in migration from the Northern Triangle to the United States has not been accompanied by increases in violent crime that would warrant sounding the national security threat alarm. Not only did overall U.S. violent crime rates descend as Central American migration share rose; but the influx of these foreigners in 27 metro areas showed no correlation when compared to the violent crime rate changes during 2012 to 2017. When compared to homicide rate changes, the weak correlation is even more evident; and in the vast majority of cases, homicide rates declined as immigration climbed significantly. It is interesting to note that the only metro area to experience a reduction in Northern Triangle concentration was Columbus, Ohio, which also experienced a 20 percent rise in homicide rates. Not one of the 27 metros with high concentration of immigrants from the NTCA region is within the top ten of the most violent metros in the United States. 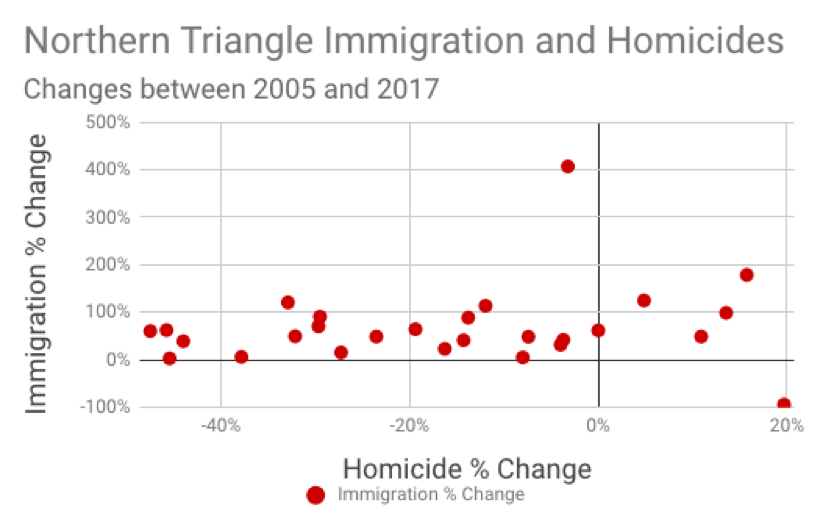 The brutal gang of El Salvadoran origins, Mara Salvatrucha (MS-13), and claims of it infiltrating American communities, has received high level attention in social and news media. Ms. Blanchard compiled data to understand the scope and reach of this transnational gang to ascertain its potential ability to disrupt the stability and security of the nation. In her study, Ms. Blanchard found that according to the U.S. Federal Bureau of Investigation (FBI), approximately ten thousand MS-13 members inhabit the United States, amounting to 0.3 percent of the overall U.S. population.[3] By comparison, there are approximately 1.4 million gang members living in the United States that make up more than 33,000 gangs.[4]  The Cato Institute reports that 0.1 percent of U.S. Customs and Border Patrol arrests at the border mid-year in 2018 were MS-13 gang members, similar to the statistics from prior years.[5] Of the 1.2 million violent crime offenses committed in the United States between 2012 and 2017, 345 were committed by members of the MS-13 gang.[6] Therefore, the author contends that although a legitimate concern for the communities which it inhabits, this criminal organization does not have the potential to disrupt the security of the United States as a whole. She suggests that the violence of this subgroup of a subgroup should be addressed at a local level and separated from the immigration dialogue. Ms. Blanchard contends that the conflating of all immigrants with the MS-13 gang, as has been done repeatedly through President Trump’s tweets and speeches, is unfounded and problematic.

The author offers several policy recommendations to address the surge in Central American migration, to reduce the burden on host countries, and to facilitate balanced immigration dialogue. First, the author suggests engaging media, community, and non-governmental organizations in an effort to balance the dialogue surrounding the migrants and inform the American public of the extent of the threat, thus encouraging fact-based immigration policy-making and aiding in the migrants’ assimilation. The author also urges these groups to highlight the positive results occurring in the Northern Triangle region to audiences in both in the NTCA and the United States. She contends that the hopelessness that drives migrants from their homes could be replaced with increased confidence in local governance and civic action to support the ongoing efforts towards stability and economic opportunities.

Ms. Blanchard calls on the United States government to offer sustained and increasing support to sending communities to reduce the push factors of migration. In addition, Ms. Blanchard urges the United States to support other host countries to create additional safe havens in the region through the offsetting of the onboarding costs and engaging in cooperative security initiatives. She points out that if Mexico is unable to shoulder the burden of absorbing the new arrivals or if the migrants are unable to find safe haven in Mexico, the United States is obligated by international law to hear their asylum claims on U.S. soil. Another recommendation the author offers is to give priority to bilateral workforce development initiatives that have the potential to reduce the need to migrate northward. Finally, Ms. Blanchard suggests that the United States reevaluates the traditional resettlement-based international refugee policy and consider a development-based one, which can transform refugees from a burden to a benefit for the host country.