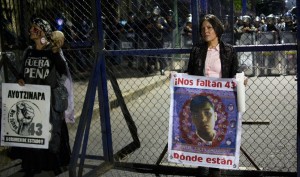 12/11/15 (written by alagorio) – On December 1st, parents of the missing forty-three Ayotzinapa students lifted the protest camp at the capital. The decision came after the Interior Department announced the creation of a new specialized investigation unit. For more than a year the parents did not accept the original government conclusions in the case.

The Interior Department deputy secretary for human rights, Roberto Campa, announced that a “fresh group” of investigators would be taking on the case. Provincia reports that Campa said the new investigation will focus on looking into who gave orders to the accused criminal group Guerreros Unidos. The investigation will also look into the role of the police in the disappearances. Campa mentioned that authorities have already searched in six hundred and sixty-nine places for the missing forty-three students.

The Washington Post reports that the new investigation is influenced by international experts and human rights groups who cast doubt on the Mexican government’s account of the case. The official story published by the Mexican government stated that the criminal organization, Guerreros Unidos, burned the student’s bodies at the Cocula trash dump. Nevertheless, there were numerous scientific facts that contradicted the government’s account of the events.

The new investigations address parents demands for the Ayotzinapa students. The students disappeared more than a year ago on September 26. 10/18/14 (written by cissel) — Another Mexican journalist has been the target of violence, this time in the state of Sinaloa. Jesús Antonio Gamboa Uriás (39), the head of the politically-charged magazine Nueva Prensa, disappeared the night of October 10, according to a complaint filed by his family with the State Attorney General’s Office (Procuraduría General de Justicia del Estado, PGJE). Speaking from Culiacán, Sinaloa, Iván Gamboa, the brother of Jesús Antonio, stated that the last time his brother was seen was around 11:00pm on October 10 in Ahome, Sinaloa at the local corner store El Paradero owned by Iván. Reports indicate thatJesús Antonio drove away from the store through the streets of the Anáhuac suburb in his own vehicle, and has not been seen since. The PGJE is investigating the case.

Some speculation has risen that Gamboa’s disappearance may be politically charged. Not only does Nueva Prensa report on stories of politics and corruption, but Gamboa, who has had over 18 years of experience in media, was also one of the leaders of a movement in August to repeal a law enacted by the Sinaloan Congress. Also known as the “Ley Mordaza,” or “Gag Law,” the law limited access journalists, and the public at large, have to information related to investigations and judicial cases. Gamboa played an active role in gathering hundreds of protestors to a march on August 7, demanding Congress repeal the law, which it unanimously did several weeks later. Sinaloa is also home to the Sinaloa Cartel and related organized crime violence, thus the PGJE is investigating the motive behind Gamboa’s disappearance, whether political, cartel-related, or other.

Gamboa’s disappearance comes just one month after a story caught national news of the assault of a young female reporter in Guanajuato—an attack allegedly ordered by the town’s mayor and municipal police force. Such events add to Mexico’s already notorious standing as one of the most dangerous countries in the world for journalists to work. In April 2014, for example, the Committee to Protect Journalists (CPJ) ranked Mexico in the bottom seven countries worldwide in its effort to punish and investigate crimes against journalists. Specifically related to Gamboa’s case and the previous incident in Guanajuato, organization Artículo 19 reported that of the 330 acts of aggression against journalists reported in 2013, 60% were committed by government officials.

Witchel, Elisabeth. “Getting Away With Murder.” Committee to Protect Journalists. April 16, 2014.

“Body of kidnapped journalist found outside of Acapulco.” Justice in Mexico. June 7, 2014.