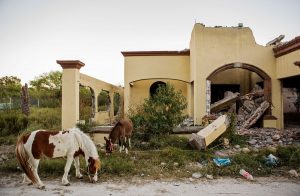 The destruction of the 2011 Allende massacre is still evident to this day. Source: ProPublica

6/27/2017 (written by Lucy Clement La Rosa)- Over six years ago, a small ranching community near the Texas border of Mexico bore witness to the vengeful assault of Las Zetas, one of Mexico’s historically violent drug trafficking organizations. A recent publication by Ginger Thompson, a Pulitzer distinguished senior reporter at ProPublica, offers a unique account of the Allende massacre. Titled “How the U.S. Triggered a Massacre in Mexico”, the article was co-published by ProPublica and National Geographic. The article is centered around eyewitness testimonies on both sides of the tragedy, including families of the Allende victims, U.S. Drug Enforcement Agency (DEA) agents, and ex-Zetas informants, reverberating the voices of Allende.

The publication follows how the Zetas cartel descended upon Allende and neighboring towns in the northern state of Coahuila. The Zetas were acting upon rumors that Jose Luis Garza, Jr., affiliated with the cartel, had snitched to U.S. authorities. The Garzas were one of the oldest Allende families, owning multiple livestock ranches in and around the region. Armed Zetas arrived in Allende on the evening of March 18, 2011, and began by targeting the Garza ranches. Then, the Zetas moved north of the region, pillaging, kidnapping and killing those unfortunate to cross their path. Emergency management personnel from the region were pressured by the cartel to ignore cries for help. Evaristo Treviño, Allende’s fire chief at the time, said, “The only thing we could do is stand down, out of fear of the threats we faced… We were afraid for our lives. We couldn’t fight bullets with water” (ProPublica).

As specified by Thompson’s publication, the Zetas’ violent retribution can be traced back to premature information sharing by the DEA and institutional corruption in Mexico. Several months before the Allende massacre, the DEA persuaded Jose Vasquez, Jr., a Zetas operative, to submit the personal identification numbers (PINs) of Miguel and Omar Treviño’s cell phones. The Treviño brothers were powerful Zetas leaders, highly sought after by the DEA. After Vasquez procured the PINs, the information was released to a DEA supervisor in Mexico, who regrettably shared it with a Mexican police force with a reputation of collaborating with criminal organizations.

It was not difficult for the Zetas to trace the leak to Allende, due to the small number of people with access to the Treviños’ PINs. Although the Zetas misidentified Garza as the leak, Vasquez also held ties to Allende. Both Garza and Vasquez fled Allende into the U.S. in return for cooperating with U.S. law enforcement, leaving the town to bear the brunt of the Zetas’ wrath. Still today, the Allende massacre is testimony to the importance of information security in a country fraught with institutional corruption. In a recent email correspondence, Thompson commented, “I worry that this story, and the accountability issues it raises for American security agencies working in Mexico, could be lost.”

The failure of Mexican institutions to hold the Zetas accountable for the violence in Allende did not go unnoticed. Renowned Mexican human rights activist, Sergio Aguayo, actively led a research campaign in 2016, highlighting the institutional corruption that both perpetuated and obscured the violence in Allende. Soon after, former Governor of Coahuila, Humberto Moreira Valdés, sued Aguayo for defamation of character due to an opinion piece labeling Moreira as “corrupt”. Aguayo publicly postulated that Moreira was attempting to indirectly intimidate him for his investigation into Allende.

Six years later, the violence and corruption that led to the Allende massacre is un-abated. As reported by The Guardian, government statistics disclosed a record-breaking number of 2,186 homicides in May of 2017, eclipsing the previous high of 2,131 in May of 2011. Additionally, Mexico has experienced an approximately 30% increase in homicides this year, in comparison to January-May of 2016. These numbers are significantly impacting the popularity of current Mexican President, Enrique Peña Nieto, who campaigned on the promises of reducing violence. Viridiana Ríos, a Wilson Centre analyst, remarked, “The increase in violence is a clear sign that the strategy Enrique Peña Nieto sold us has failed” (The Guardian).

Although the 2011 massacre is a sore reminder of violence and corruption in Mexico, commemorating the voices of Allende is an important step in addressing the institutional problems Mexico faces still today. In the words of Thompson, “[The Allende] story [is] about the permeability of the border… of what it’s like when a cartel infiltrates your town and most of all, what it’s like to live in a country where you don’t trust anyone enough to help.”