08/05/21 (written by rramos) – On July 22, journalist Ricardo Domínguez López was killed by a group of armed assailants in the parking lot of a shopping center in Guaymas, Sonora. At the time of his death, Domínguez López was director of local media outlet InfoGuaymas and also served as president of the Metropolitan Association of Independent Journalists of Guaymas and Empalme (Asociación Metropolitana de Periodistas Independientes de Guaymas-Empalme).

Back in March 2021, Domínguez López expressed fears over threats and harassment that he claimed he had been receiving from criminal groups. In a formal complaint filed with the federal Attorney General’s Office (Fiscalía General de la República, FGR), Domínguez López asserted that criminal elements were attempting to intimidate him and other journalists in Guaymas specifically because of their reporting. In the filing, he also lamented that although many media workers in the city had made numerous reports to various government agencies, journalists continued to receive threats, including from allegedly corrupt local officials such as the Guaymas public security commissioner.

The July 22 killing in Sonora follows a recent string of violent incidents targeting journalists and other media workers. On July 19, just days before Domínguez López was killed, radio broadcaster Abraham Mendoza died after being shot at point-blank range as he exited a gym in Morelia, Michoacán. Mendoza had become well-known in the Morelia area for his work on a radio news talk show in which he often criticized politicians, including some with ties to President López Obrador’s ruling National Regeneration Movement (Movimiento Regeneración Nacional, MORENA) party. Similar to Domínguez López’s murder, Mendoza’s killing also attracted widespread attention, including a statement from the director-general of the United Nations Educational, Scientific, and Cultural Organization (UNESCO).

According to Animal Político, several other journalists throughout Mexico have also been murdered in 2021 so far, including cases in Coahuila, Mexico State, and Oaxaca. Along with homicides, disappearances represent another serious danger for media workers. This year alone in Domíguez López’s state of Sonora, two journalists—Jorge Molontzín and Pablo Felipe Romero Chávez—both went missing in March and have yet to be located.

There have been some high-profile successes in resolving acts of violence against journalists recently. This includes the sentencing in June 2021 of one of the participants in the murder of Sinaloa journalist Javier Valdez and the February arrest of former Puebla Governor Mario Marín Torres in connection with the 2005 torture of investigative reporter Lydia Cacho. Nevertheless, the series of killings and disappearances of media workers this year has compelled journalists to demand greater protections, including more police protection for them and their families.

Days after the Domínguez López homicide in Guaymas, media workers from throughout Sonora, including photographers, camerapersons, reporters, and others also marched towards the offices of the state Attorney General’s Office (Fiscalía General de Justicia del Estado, FGJE) in Hermosillo. There, the protestors delivered a document to Sonora Attorney General Claudia Indira Contreras calling for government officials to either redouble their efforts in investigating and prosecuting crimes against media workers, or resign.

The exasperated response from journalists in the wake of these most recent aggressions appears to be justified. A 2020 report issued by the Reporters Without Borders found Mexico to be the deadliest country for journalists. According to the international non-governmental organization Artículo 19, at least 139 media workers in Mexico have been killed since 2000 for reasons related to their profession. Of these, 43 were murdered during the administration of current President López Obrador, according to data from the federal Secretary of the Interior (Secretaría de Gobernación, SEGOB). If authorities fail to heed calls for more meaningful actions to safeguard journalists and hold perpetrators of violence accountable, freedoms of expression and access to information may continue to be further jeopardized in the future.

8/20/2018 (written by Quinn Skerlos)-  Earlier this summer, on May 29th, the body of Hector Gonzalez Antonio was found on a dirt road in Ciudad Victoria, Tamaulipas.  According to authorities, Gonzalez Antonio’s corpse showed signs of being beaten, likely with rocks. The journalist, worked for Grupo Imagen’s TV and newspaper services, and covered a crime beat. On June 30th, Mexican journalist, Jose Guadalupe Chan Dzib was murdered in Quintana Roo, one of Mexico’s historically least violent states. Even more recently, journalist and founder of Playa News, Ruben Pat was murdered on July 24th also in Quintana Roo, bringing the journalist death toll for 2018 to at least 7. He had previously reported being threatened by local police.  A relevant report on violence against journalists by the Congressional Research Service highlights the occupational hazards that Mexican journalists like Gonzalez Antonio, Chan Dzib, and Pat experience and the counter-measures implemented to protect their line of work.

On May 27, 2018, the Congressional Research Service (CRS, Library of Congress), a non-partisan research firm that provides policy analysis for the U.S. House and Senate, published a report on press freedom, or lack thereof, in Mexico. The author, Clare Ribando Seelke, is a Latin America specialist and well-published author, particularly on topics of human trafficking in Latin America. This recent report, titled “Violence Against Journalists in Mexico: in Brief” investigates the following; the status of press freedom in Mexico, violent crimes against journalists, Mexico’s efforts to address said violence, and finally, the role of the U.S. government in encouraging Mexican rule of law. 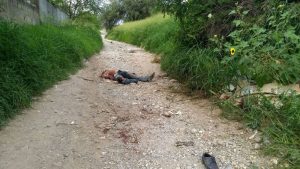 The report leads off with a comparison of press freedom within Latin America, and a summary of crimes against journalists. Although press freedom has continued to decline across Latin America, the report argues that Mexico remains one of the most dangerous places in the world to be a journalist. The report highlights statistics from both Justice in Mexico and the Committee to Protect Journalists to show the hazards faced by journalists (CPJ). For example, in the last decade, Justice in Mexico reports that 140 journalists and media professionals were killed in Mexico. On that note, the report identifies that Mexico sports one of the highest murder rates for journalists in the world and is in the top 10 deadliest countries worldwide for media workers. In 2017 alone, Article 19, an international human rights organization, found that there were 500 “aggressions,” or violent actions against journalists not limited to just kidnapping and murder (Article 19). This number is significantly higher than the year before and Mexican journalists continue to face economic and psychological pressures, leading some to seek asylum abroad.

The report then delves into some of the efforts taken by Mexican officials to counter and reduce violence against journalists. According to the CRS report, the Federal Protection Mechanism, established by the Mexican government in 2012, has provided protection for 380 journalists by means of armed guards, panic buttons, and other resources. Another governmental initiative, the Special Unit for Crimes Against Journalists and Violations of Freedom of Expression (Fiscalía Especial para la Atención de Delitos Cometidos contra la Libertad de Expresión, or FEADLE) was established as its own office under the Attorney General in 2010. FEADLE has the authority to investigate any case, even if it is already under review by state authorities. However, the CRS report also underlines the shortcomings of governmental protections in Mexico. For example, the U.N. and other human rights authorities maintained that the Federal Protection mechanism is “surprisingly limited,” as studies have shown that some panic buttons lacked functionality and were structurally ineffective (OHCHR). These buttons reach only local police, who potentially lack the resources or the will to help, or are in the pocket of organized crime (OHCHR). Only 12.6 percent of cases investigated by FEADLE ended in convictions against perpetrators from 2010 until 2017, leading the Inter-American Commission for Human Rights to state that FEADLE “still has not made any impact in combatting impunity (OHCHR).” The CRS highlighted a CPJ report that claims an 86% impunity rate for journalists killed as a result of their work (CPJ).

In its conclusion, the report underscores the U.S. State Department-sponsored Merida Initiative that has given 2.9 billion dollars in support of rule of law in Mexico. However, as the report points out, U.S. congressional officials have discussed concerns about human rights conditions in Mexico, including the Mexican government’s ineffective protection of journalists and human rights advocates. Governmental organizations receiving U.S. aid continue to be monitored, and in 2014 and 2016 Mexico was refused certain assets because they had not made sufficient progress on human rights issues. While there have been policy obstacles for the partnership, the partnership remains, with aid specifically directed towards strengthening rule of law, protecting human rights, and reducing impunity rates.

Press Freedom Currently, and in Relation to the World 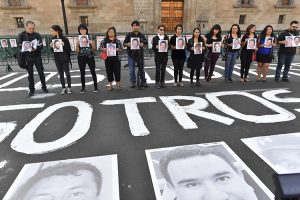 Members of the press hold images of colleagues during a protest against the murder or disappearance of more than 140 journalists and photojournalists in Mexico since 2000, in front of the National Palace in Mexico City on June 1, 2018. (AFP, Yuri Cortez)

According to Justice in Mexico’s “2018 Drug Violence Report,” 133 Mexican journalists have been killed from 2006 to 2016. The report highlights that journalists in Mexico are three times more likely to be killed than the general public. Last year alone, 14 media workers were killed, including the prominent corruption and organized crime reporters Miroslava Breach and Javier Valdez. La Jornada, one of Mexico City’s daily newspapers, reported that Mexican journalists do not feel confident in government institutions to protect them, and that more than 60% of journalists surveyed have reported aggressions pointed towards them regardless of public protections (La Jornada).

Even with government measures, such as FEADLE and the federal protection mechanism, Reporters Without Borders listed Mexico as 147th in world press freedom for 2018, a worse ranking than South Sudan and Afghanistan (RSF). In a statement made by the CPJ, impunity “has made the country one of the most dangerous places in the world for reporters” and the 2000 acts of violence against journalists in Mexico recorded by the CPJ since 2012 seem to echo this sentiment (CPJ). Journalism across Mexico is being affected by violence and impunity, and while the government appears to have taken steps to help, there is room for improvement in order to fully protect press freedom and journalists in Mexico.

Linthicum, Kate. “Anther Journalist has been killed in Mexico- the sixth this year.” Los Angeles Times. May 29, 2018. http://www.latimes.com/world/mexico-americas/la-fg-mexico-journalist-killed-20180529-story.html