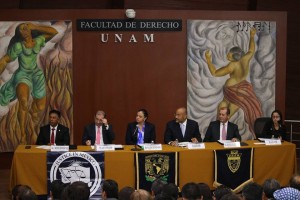 The symposium served as the conclusion to OASIS’s year-long training and education program. Throughout the 2014-2015 academic year, OASIS sponsored training courses in oral adversarial litigation skills in Mexico City as well as visits to various cities in the United States where participants observed how the U.S. justice system operates. The UNAM symposium evaluated the success of OASIS’s activities and the justice reform in general while also identifying future training and infastructure needs in order to maintain the reform’s growing momentum across Mexico’s 31 states and the Federal District.

Mexican Supreme Court Justice Ministro Alberto Pérez Dayán was first to speak on Mexico’s justice reform following the symposium’s introduction on Thursday evening. Ministro Pérez Dayán outlined the various challenges that remained in regards to the new justice system’s implementation. He noted that courts would first have to name competent judges and justice system participants as well as provide continuous training for these actors. Furthermore, he spoke of a “cultural change” which must occur in order for the reform to be successful. He explained that must be a clear “before” and “after” in regards to the reform; courtroom technology must be modernized, courts must learn to move from a document system to an oral system, and all actors within the justice system must adhere to strict rules and guidelines that allow the system to operate in a consistent fashion across the country.

The second panel of the night focused on the states’ remaining challenges in regards to the new justice system’s full implementation. State supreme court justice José Miguel Salcido Romero of Chihuahua opened the panel by expressing the importance of relying on police investigation and the proper collection of evidence in order to reach a case verdict. He explained that previously, Mexican courts had relied heavily on confessions in the courtroom, causing police investigation and the processing of forensic evidence to take a backseat throughout the adjudication process. State supreme court justice Apolonio Betancourt Ruíz of Durango continued the discussion by asking the question, “what does society want?” He elaborated by stressing that current Mexican society is demanding justice and that this should be the “grand mission” of every courtroom judge rather than the mechanical application of written laws.

State supreme court justice Alejandro González of Michoacán furthered the dialogue on the states’ remaining challenges by addressing the problem of infrastructure. He highlighted the importance of having adequate courtroom facilities and outlined several ongoing and completed projects in Michoacán. He also spoke to the significance of national cooperation throughout the reform process, prompting the audience to consider if the reform would become a national dialogue or “a jurisprudential Tower of Babel.” State supreme court justice Jorge Ignacio Pérez Castañeda of Baja California concluded the panel with a discussion of the quantity and quality of personnel needed to operate within the new justice system. He specifically focused on the role of municipal police, explaining that because these officers are the first point of contact between citizens and the new penal system, their continued training on the new system should be a priority for Mexican states.

The symposium’s second day began with a panel discussion dedicated to the training processes necessary for the new justice system’s full implementation. Dr. María Candelaria Pelayo Torres, Director of the Judiciary Institute of Baja California (Instituto de la Judicatura de Baja California), opened the dialogue with an emphasis on the academic nature of the reform. She noted that the entire law education system requires a transformation in order for future lawyers and judicial operators to have an adequate understanding of how their roles will change in the new justice system. As a result, she explained that there is a high demand for outstanding academic institutions that have the resources and instructors to provide adequate training in the new language of oral adversarial litigation.

San Diego defense attorney and OASIS Principal Instructor Janice Deaton elaborated on effective training methods and reflected on her instruction experiences with the OASIS program. She stressed that all training programs should employ the model of “learning by doing” in order to teach their participants how to effectively utilize oral adversarial litigation skills in a courtroom. Dr. Dan Schneider of American University expanded upon this notion by encouraging lawyers not to be passive participants in the justice system, but its main actors. He also reflected upon his experience with the OASIS training program, explaining that its participants had the opportunity to observe the strategy and thinking of the lawyers in a vehicular homicide court case in Maryland. He referred to the practice of law as “an art” which involves critical thinking, social skills, and an eagerness to challenge authority. Dr. David Fernández Mena, Coordinator of an American Bar Association Rule of Law Initative(ABA-ROLI) program, explained how he and his organization are working to transform the practice of law throughout Mexico. Through his ABA-ROLI program, Dr. Fernández Mena trains professors and universities on how to teach law in the context of the new justice reform. He stressed that efforts such as these are imperative, as there are currently no official accreditation or training systems for university professors to teach law as it will be practiced under the reform.

The panel discussion continued with several insightful comparisons of the U.S. and Mexican legal systems. Professor Miroslava Pineda Zúñiga made the observation that many Mexicans do not consider the U.S. justice system to be the “final goal” for Mexico due to the manner in which it is portrayed in the media. However, she noted that the U.S. system is principally based on the use of logic and critical reasoning, which is what the Mexican justice system should choose to emulate. She also conveyed the importance of citizen participation and trust in the system, which she claimed would improve its credibility. Dr. Alberto del Castillo del Valle added to this comparison by highlighting the similarities of the U.S. and Mexican constitutions. He specifically focused on the “forgotten” role of rights or guarantees, which are present in both documents. He concluded by emphasizing that these guarantees should be respected within the new system. Professor Eduardo Alonso Domínguez highlighted the use of mediation as a form of case resolution within the United States. He reminded the audience that ninety percent of U.S. cases are resolved through agreements between the plaintiff and the defense as opposed to oral trials. He applied this principle to the Mexican justice system, declaring that negotiation will be an essential process to the effective resolution of cases. Professor Ignacio Hernández Orduña concluded the panel with a discussion of the specific procedures employed by both the U.S. and Mexican legal systems.

The third panel of the day was dedicated to the measurement and evaluation of the justice reform’s implementation. Dr. David Shirk, professor at the University of San Diego and the Principal Investigator for Justice in Mexico, began the panel discussion by describing the context in which the justice reform began and how Justice in Mexico has worked to support this reform. He also emphasized the importance of “taking the pulse” of the new justice system’s performance through methods of regular evaluation.  Dr. Matthew Ingram, professor at State University of New York at Albany, expanded upon these methods by presenting his findings on the three factors affecting the diffusion of the reform across the Mexican states. He explained that the principal mechanisms moving the reform were federal instruction, political party ties across the states, and geographic networks between states. Professor Octavio Rodríguez Ferreira, Justice in Mexico’s Project Coordinator, concluded the panel with a discussion of Justiciabarómetro, a research initiative through Justice in Mexico that evaluates levels of professional development of actors within Mexico’s justice system as well as the perceptions of these actors regarding the functionality of the justice system. All three panelists agreed that recent research has only provided a minimal analysis of the current status of the justice reform and that there is a great need for more accurate measurements and indicators of the new system’s performance. 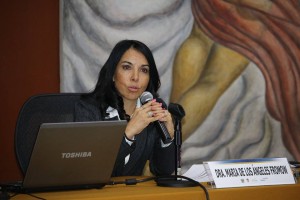 The symposium’s final conference included a lecture by the renowned Dr. María de los Ángeles Fromow, Technical Secretariat of the Coordinating Council for the Implementation of the Criminal Justice System of the Ministry of the Interior. Dr. Fromow shared many insights into the implementation of the new justice system, reminding the audience that six Mexican states have already achieved full implementation and sixty-two percent of the population is currently operating under the new system. She noted the importance of both political and economic will in the implementation process. Dr. Fromow was joined on stage by Dr. María Leoba Castañeda Rivas, the Director of UNAM’s law school and a respected collaborator of Justice in Mexico’s OASIS project.

The symposium was a monumental success, presenting a thorough picture of the justice reform’s past successes and remaining challenges moving forward. Justice in Mexico would like to thank all of the symposium’s panelists and moderators, UNAM’s law school, its faculty, and its director, Dr. María Leoba Castañeda Rivas for their dedicated collaboration and commitment to justice reform in Mexico.