01/02/20 (written by kheinle) – The State of Querétaro appears to be the model in Mexico for implementing the Accusatorial Criminal Justice System (Sistema de Justicia Penal Acusatorial, SJPA), at least according to several research organizations and elected officials. When considering the state’s use of an inter-institutional collaboration system, as well as its efforts to reform its prison systems, Querétaro has been at the forefront.

One of Mexico’s leading research institutes, México Evalúa, found that Querétaro was the top state for the third consecutive year in a row in terms of its criminal justice proceedings. The findings were published in its annual report, “Hallazgos 2019: Seguimiento y evaluación del sistema de justicia penal en México,” released in October 2020. The report looked at factors including the strength and integration of the SJPA, the technology used, and the state’s unique, institutional coordination. It specifically highlighted Querétaro’s use of the model known as “Cosmos,” or the Commission for the Evaluation of the Operation of the SJPA (Comisión para la Evaluación de la Operación del SJPA). The model focuses on inter-institutional collaboration, which, according to México Evaluá, has expedited the state’s consolidation of the criminal justice system since it went into effect just one year ago (Hallazgos, pg. 30).

Querétaro’s governor, Francisco Domínguez Servién, similarly credits his state’s judicial success thanks in large part to the “strong inter-institutional coordination.” Speaking at the second Cosmos session in early December, Domínguez proclaimed that “with the participation of the people of Querétaro, [this state] will be the epicenter of justice in the country.”

The Governor also emphasized the state’s leading role in protecting human rights within the penitentiary system. “I come back to the fact that the Querétaro State Prison System (Sistema Estatal Penitenciario) has been at the top nationwide for two consecutive years, 2018 and 2019, in terms of respecting human rights, according to the National Commission of Human Rights (Comisión Nacional de los Derechos Humanos,” said Governor Domínguez. The governor spoke at the XLVI Ordinary Session of the National Public Security Council (XLVI Sesión Ordinaria del Consejo Nacional de Seguirdad Pública) in mid-late December 2020.

Governor Domínguez’s comments came on the heels of the First International Innovation of Justice Forum (Primer Foro Internacional: La Innovación en la Justicia) held in late November. Mexico’s Secretary of Government, Juan Martín Granados Torres, spoke on two panels at the event: “Innovations in Prisons” and “Innovations, Justice, and Security.” Granados Torres, who is also involved in the coordination and operation of the Accusatorial Justice System, specifically highlighted Querétaro’s success with aligning its prison system with the new model. He focused on the state’s use of the restorative justice model – a key component in the alternative dispute resolution methods introduced in the SJPA. One critical element of the restorative practice is the focus on the offending party’s reinsertion into society in a dignified and structured manner that reduces recidivism. Although the social reintroduction takes time and capacity, noted Granados Torres, the outcomes are worth the efforts.

Looking more broadly at the rule of law across Mexico, Querétaro ranks fifth out of the nation’s 32 state entities in the World Justice Project’s “Rule of Law Index 2019-2020.” It placed behind Yucatán at the top, followed by Aguascalientes, Zacatecas, and Campeche. It was one of only six state entities that did not see a change in their Rule of Law Index score from 2018-2019 to 2019-2020.

Of the World Justice Project’s eight factors taken into consideration to develop the Index, Querétaro scored the highest on Factor 4: Fundamental Rights. This indicator measures absence of discrimination, due process of law, freedom of opinion, freedom of religion, right to privacy, freedom of association, and labor rights. It scored the lowest, however, on Factor 3: Open Government, which measures access to information and citizen participation.

01/30/20- Justice in Mexico, a research-based program at the University of San Diego, released a working paper by Rita E. Kuckertz, entitled, “Forced Confessions: Tracking Torture and Mistreatment in Mexico’s Accusatorial Criminal Justice System.” This study examines the impact of Mexico’s 2008 criminal justice reform on the use of torture and cruel, inhuman, or degrading treatment by judicial sector operators as prosecutorial tools. Specifically, it analyzes how the reform has served to reduce the practice of utilizing torture and mistreatment to extract criminal confessions by imposing new constraints and incentive structures to re-shape the behavior of judicial actors. It employs data from two sources in order to determine whether or not the implementation of the Accusatorial Criminal Justice System (SJPA) has resulted in a reduced incidence of torture and mistreatment by judicial sector personnel. The results suggest that the reform can indeed be credited for small but meaningful reductions in torture, mistreatment, and forced confessions in Mexico.

The author hypothesized that the reform would be associated with decreased levels of torture in the judicial sector. Specifically, this study presumed that high subnational SJPA performance scores would be associated with reduced rates of torture by judicial sector officials in those states. Additionally, it was predicted that following the reform’s municipal implementation, detainee reports of torture and forced confessions would decline at a national level. While this research also hypothesized that states with higher SJPA performance scores would demonstrate greater reductions in reports of torture and forced confessions following implementation, it was not possible to confirm this conclusion due to insufficient data.

Still, result of the author partially confirmed the geographic hypothesis outlined above. Annual correlation and regression analyses between state reform performance scores and state-level rates of torture and mistreatment complaints against judicial sector operators did not produce significant associations from 2015 to 2017. However, analyses employing 2018 data yielded a significant relationship between the two variables, suggesting that the reform’s consolidation over time has had a positive impact on human rights in Mexico’s judicial system. Furthermore, insignificant findings from 2015 to 2017 may be explained by factors unrelated to the judicial reform. While it was beyond the scope of the study to identify other variables affecting the relationship during this period, the author hypothesizes that increases in drug war-related enforcement measures may have played a role.

Figure 7: Results of Chi-square Test and Descriptive Statistics for Reports of Torture and Mistreatment by Presence of Municipal Reform Implementation at Time of Arrest

Figure 8: Results of Chi-square Test and Descriptive Statistics for Reports of Forced Confessions by Presence of Municipal Reform Implementation at Time of Arrest

The author argues that regardless of these findings, the existing criminal justice reform may not be enough to address the epidemic of torture. Ms. Kuckertz posits that Mexico must also (a) improve official sources of data used to track cases of torture and mistreatment, allowing researchers to monitor the success of state efforts to reduce the practice; (b) explicitly and publicly condemn the practice, instituting appropriately severe penalties for those found guilty of such crimes; (c) establish strong protections for detainees and their families, banning the practice of detention without charge, or arraigo; and lastly, (d) remain steadfast in defending the criminal justice reforms amidst growing calls to revert to familiar judicial practices characteristic of one-party rule in Mexico. While these proposals are tied to Mexico’s broader challenges in addressing corruption, impunity, and capacity issues, they represent crucial steps toward the country’s democratic consolidation and the establishment of institutions that respect its citizens’ human rights.

Rita E. Kuckertz earned her Bachelor’s degree in Psychology and Spanish with an emphasis in Latin American Studies from the University of San Diego in 2015. She is currently a candidate for the Master’s degree in International Relations, also from the University of San Diego. Her research primarily focuses on human rights and judicial reform in Latin America, with a particular emphasis on Mexico. She has served as Program Assistant and Operations Coordinator at Justice in Mexico for over four years. 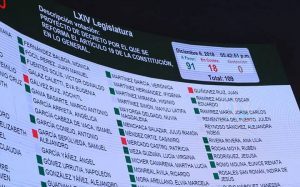 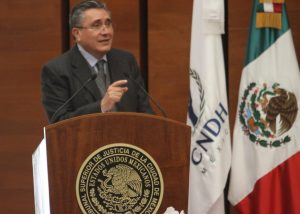