02/05/18 (written by David A. Shirk) — A new Justice in Mexico policy brief by Jaime Arredondo Sánchez Lira, Zulia Orozco, Octavio Rodríguez Ferreira, and David A. Shirk, entitled The Resurgence of Violent Crime in Tijuana, provides an assessment of the recent resurgence of violent crime in the Mexican border city of Tijuana in the state of Baja California. Drawing on the latest available information and statistics, the authors examine the varied trends in the major categories of violent crimes in Tijuana: homicide, assault, robbery, extortion, kidnapping, rape, and other sex crimes.

According to the Baja California State Secretariat for Public Security, the number of murders in 2008 and 2009 reached 1,094, which at the time constituted record levels of violence for the city. However, beginning in 2015, the city saw a gradual increase in the number of homicides in 2015 (612 with 674 victims), 2016 (872 cases with 919 victims), and 2017 (1,618 cases with 1,780 victims) that has now placed the city at the forefront of a national surge in homicides, with Tijuana accounting for close to 6% of all homicide victims in Mexico. 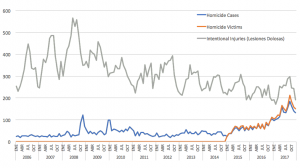 The authors find that the distribution of violence within Tijuana is uneven and reflects geographic, economic, and social divisions in the city. Examining neighborhood level homicide data, the authors found such violence to be highly concentrated in specific areas, primarily in three clusters that correspond to specific zones within the city: Eastern Tijuana (comprising the delegations of La Presa, La Presa Este, and Otay), the Sanchez Taboada delegation, and the Centro delegation. They also found that 20% of all homicides were concentrated in only 10 out of the roughly 850 neighborhoods in Tijuana. Of those, the three most violent neighborhoods accounted for 10% of all homicides in the municipality: Camino Verde (75), Zona Norte (49), Zona Centro (32). 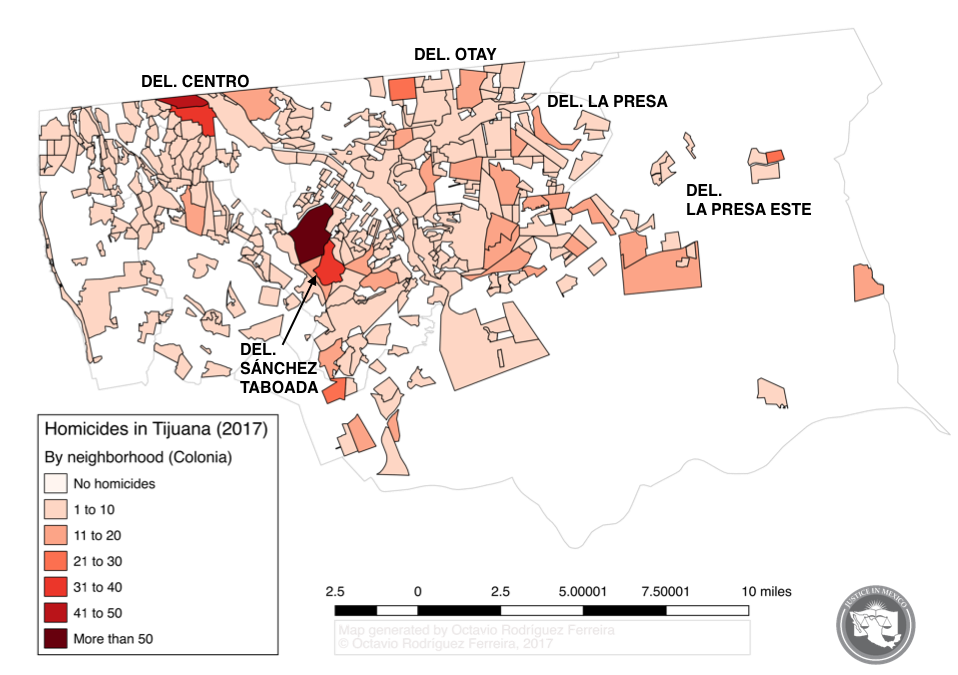 Meanwhile, crime trends have been mixed for other forms of violent crime in Tijuana over the past few years. For example, armed robberies in public spaces have also generally declined since the peak in 2008-10, when was an average of over 300 reported incidents per month: in 2015-17, the average monthly incidence was down to roughly half that amount. However, there has been a sharp increase in the number of armed robberies in Tijuana’s commercial establishments in recent years, reaching as high as 300 incidents per month, and a surge of car thefts from the 7,655 cases reported in 2016 to 10,148 in 2017, an increase of 32.6%. 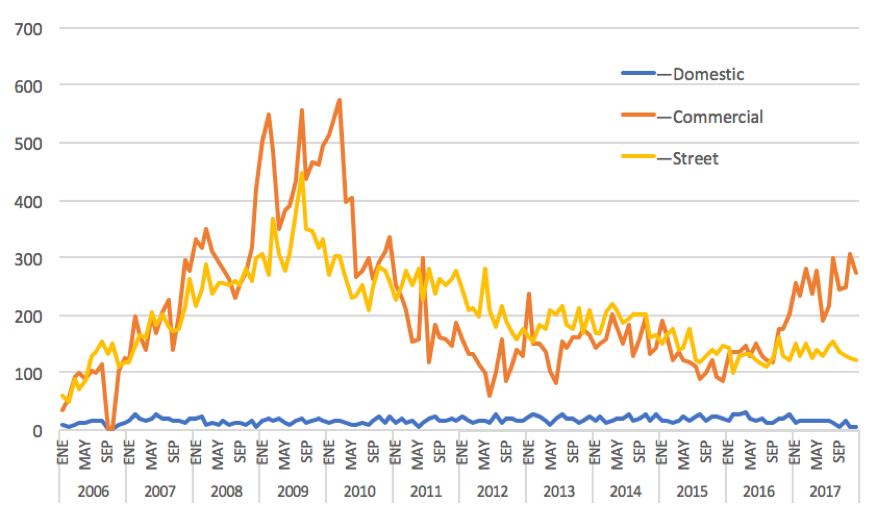 In an effort to explain these trends, the authors provide a general overview of the recent history of organized crime in Tijuana, with consideration of the role it has played in recent surges in violence. The authors find that there has been an important shift in organized crime in Tijuana, due to the arrest and extradition of Joaquín “El Chapo” Guzmán, who once controlled the Sinaloa cartel. Since his fall, a new criminal organization, known as the “Jalisco New Generation Cartel” has asserted its presence in Tijuana and has directly clashed with the remnants of the Sinaloa cartel. Amid the conflict between these powerful criminal organizations—and the leadership vacuum among the city’s criminal “shot callers”—there has been a lack of control over local gangs and dealers engaged in illicit drug sales and other illicit activities at the neighborhood and street-corner level.