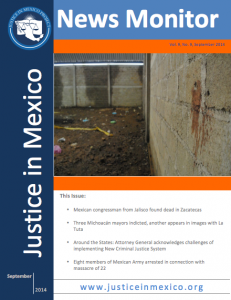 We are pleased to announce the release of our latest Justice in Mexico News Monitor, covering the month of September 2014.

The Justice in Mexico Project conducts original research, promotes public discourse, and informs public policies related to rule of law and security issues in Mexico. This academically-based, policy focused program is based at the Department of Political Science and International Relations at the University of San Diego, and benefits from the support of university students and volunteers. Each month, the project produces an aggregated summary of Mexican and U.S. news coverage in four major categories: Crime and Violence; Transparency and Accountability; Justice System Reform; and Human Rights and Civil Society.

As always, remember that our monthly news monitors, our latest drug violence maps, our special reports, and other publications are available on the project’s website at www.justiceinmexico.org, as well as our databases of crime and other indicators at the Data Portal. You can view regular updates on rule of law and security issues in Mexico on our News Blog. You can also follow us on Twitter @JusticeinMexico and Facebook at Justice in Mexico