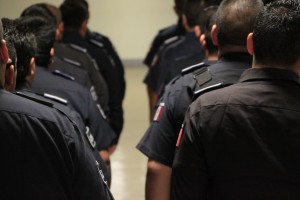 On March 12, 2015 Justice in Mexico presented the results of its latest Justiciabarómetro survey, titled: Diagnóstico integral de la policía municipal de Tijuana (in Spanish), developed in collaboration with the Institute for Security and Democracy (Instituto para la Seguridad y Democracia, INSYDE), the Law School of the Autonomous University of Baja California (Universidad Autónoma de Baja California, UABC) in Mexicali, the Woodrow Wilson International Center for Scholars and the University of Guadalajara (Universidad de Guadalajara, UdeG). The Tijuana survey builds on the findings of two similar studies conducted in Guadalajara in 2009 and Ciudad Juárez in 2011, and was implemented for Justice in Mexico by the polling firm Data Opinión Pública y Mercados (DATA-OPM) form Mexico. Like these previous studies, the Justiciabarómetro-Tijuana constitutes one of the largest independent studies of municipal police ever published in Mexico. Focusing on the border city of Tijuana, adjacent to San Diego, California, this is the largest survey conducted by an independent group of institutions with 1,917 participants with a minimum margin of error (+/- .87%) and a confidence interval of about 99%.

The report examines the views and opinions that predominate among the administrative and operational staff of the municipal police in Tijuana on various aspects related to their work. The survey inquires about the human capital and organization of the municipal police, including community relations and views of recent judicial reform efforts. Among the most relevant findings: 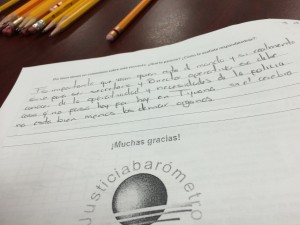 consist of a series of studies produced by Justice in Mexico Project at the University of San Diego’s Department of Political Science and International Relations, which provides policy analysis and recommendations concerning the rule of law in Mexico, based on the opinions and experiences of the operators of the criminal justice system.  This survey was supported by the generous underwriting of the Open Society Institute. The Municipal Government of Tijuana and the Secretary of Public Security were supportive at all times facilitating access to the institution and its members, and providing the necessary logistical support. The study was coordinated by María Eugenia Suárez de Garay, David Shirk, and Octavio Rodríguez Ferreira, along with other law enforcement and security specialists from Mexico and the United States.