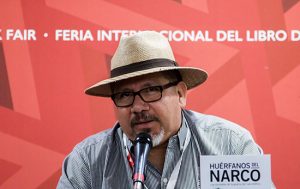 Javier Valdez speaking at a book launch in November 2016. Source: The Committee to Protect Journalists

06/08/17 (written by Lucy Clement La Rosa)- Mexican journalist, Javier Valdez Cárdenas, was shot and killed on a busy street of his hometown, Culiacán, Sinaloa, on Monday, May 15th. So far, the gunmen are unidentified. Valdez was an awarded journalist and author, well-known for his outspoken stance on drug trafficking and organized crime in Mexico. In 2011, Valdez received the International Press Freedom Award from the Committee to Protect Journalists (CPJ), as well as the Maria Moors Cabot Prize from the Colombia Graduate School of Journalism. Valdez recently published a book on the dangers of narco-journalism in 2016.

At the time of his death, Valdez was working as a correspondent for La Jornada, a daily newspaper based in Mexico City. In the past, Valdez also worked for Agence France-Presse and cofounded Ríodoce, a weekly newspaper based in Culiacán, capital of the Mexican state, Sinaloa. Sinaloa is home to the Sinaloa cartel, one of the most prominent drug cartels in Mexico, as well as home of the infamous drug lord, Joaquín “El Chapo” Guzmán. Ríodoce was independently founded in 2003, and the weekly newspaper focused its efforts on the need for honest reports of drug cartel activities in Sinaloa. With the recent extradition of Guzmán to the United States, Valdez had warned that violence in Sinaloa was rising.

The pattern of violence against journalists has been publicly recognized both within and outside of Mexico. Earlier this March, dozens of local journalists protested and demanded justice for Mexican journalists after their former colleague at La Jornada, Miroslava Breach, was murdered. Additionally, the CPJ recently published a special report titled, “No Excuse: Mexico must break cycle of impunity in journalists’ murders.”

Following reports of Valdez’s death, several journalists and government officials continued to convey their outrage, including Mexican President Enrique Peña Nieto. Nieto condemned the murder over Twitter and expressed his support for “freedom of expression and press.” CPJ representative, Jan-Albert Hoosten, called Valdez’s murder “an attack on independent journalism not just in Sinaloa, but in Mexico as a whole.” 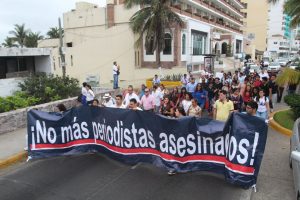 Local journalists protesting the pattern of violence against journalists in Mexico. Source: Noroeste

Since Valdez’s death, public backlash concerning the pattern of violence against journalists in Mexico has only grown. Several public protests have specifically demanded that perpetrators be identified and held responsible for their crimes against journalism. The public blames government negligence, pointing to various ominous statistics. As reported by El País, only three cases, out of more than 798 cases of violence (including harassment, assault and homicide) against journalists since 2010, have concluded with convictions. According to The New York Times, out of 117 murders investigated since 2000, only eight cases have been pursued and one solved. President Nieto has been especially criticized for his failure to improve the cycle of impunity in Mexico, despite his repeated promises to protect journalists and freedom of expression.

Among heightened tensions, journalists continue to be targeted. On the same day of Valdez’s murder, unidentified gunmen shot Sonia Córdoba and her son, Jonathan Rodríguez Córdoba; both were associated with a weekly newspaper in the Jalisco state. Sonia was hospitalized with injuries while her son was killed in the attack. On May 18th, Salvador Adame, a journalist from the Michoacán state, was abducted and has yet to be heard from. Adame had been targeted by organized crime groups several times before his abduction.

On May 24th, under the slogan, “Basta Ya (Enough Already),” around 40 Mexican media agencies, both national and international, signed a joint statement asking the government to honor their promises to end violence against journalists. The agencies included El Pais, El Nacional, Ríodoce, Noroeste, and Animal Político. The statement read, “The right to information guaranteed by the state is another principle of freedom of expression in our country that we demand, today more than ever.”