1/8/16 (written by rkuckertz and lcalderon) – According to a late-morning announcement from President Enrique Peña Nieto’s Twitter feed, Joaquín “El Chapo” Guzmán Loera, the Sinaloa cartel druglord recently made infamous for his subterranean escape in July from the Altiplano federal prison, has been captured. President Peña Nieto’s tweet read: “Mission accomplished: we have him.” Soon after the President’s online announcement, law enforcement sources confirmed this news to various media outlets, such as leading Mexican newspaper El Universal. The Mexican Navy subsequently made a statement regarding the recapture of Guzmán, saying that marines were acting on an anonymous tip from a concerned citizen regarding armed men in a nearby home in Los Mochis, a coastal town in Guzmán’s home state of Sinaloa. 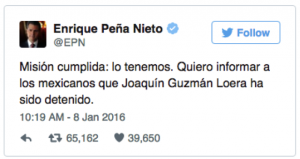 According to the Navy’s statement, the mission began after 5:00am Friday morning when authorities entered the Los Mochis home. Upon entering, they were fired at from inside the building and as a result, five suspects were killed and six were arrested. Orso Ivan Gastelum Cruz, a prominent regional drug trafficker, managed to escape. Marines confiscated two armored vehicles, eight long guns, one handgun and a rocket-propelled grenade launcher. In a second tweet, President Peña Nieto called Guzmán’s recapture an “important achievement in favor of the Rule of Law of Mexico.” 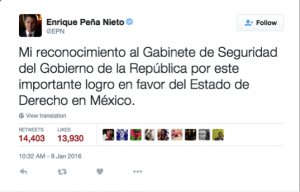 It is still uncertain if Guzmán Leora will be extradited to the United States following this recapture. After Guzmán Leora was captured for the second time in 2014, President Enrique Peña Nieto declined a U.S. request for the extradition of the Sinaloa cartel druglord. In an interview with Attorney General Jesús Murillo Karam in January 2015, Murillo Karam told The Associated Press, “I could accept extradition but at the time that I choose. El Chapo must stay here to complete his sentence and then I will extradite him,” he continues, “So about 300 or 400 years later — it will be a while.”

However, the United States proceeded with another request for extradition in late June of 2015, which the Mexican Attorney General granted three weeks after Guzmán Leora’s July escape. Shortly after, Guzmán Loera’s lawyer filed a request for injunction against the Attorney General’s order, resulting in the suspension of the order. As a result of the suspension, Guzmán Loera may not be directly handed over to U.S. authorities; instead, he must first receive a trial in Mexico to determine whether or not he will be extradited to the United States to face further charges. Guzmán Loera faces charges in seven U.S. jurisdictions including Brooklyn, Texas, Illinois, Chicago, New Mexico, Texas, Miami, and San Diego.

In order to place Guzmán Loera’s recent recapture into a broader context, we have provided below a general timeline of his activities prior to his leadership of the Sinaloa cartel through his most recent escape from the Altiplano federal prison.

Guzmán’s involvement in the drug trafficking world began in the 1980’s when he worked for the major drug kingpin in Mexico at that time: Miguel Angel Félix Gallardo, founder of the Guadalajara cartel. Guzmán Loera was in charge of the logistics and operations of the cartel at a time where Mexican drug traffickers were middlemen for Colombian drug cartels to get to the U.S. market. In 1985, Félix Gallardo sent his men, including Guzmán, to kidnap, torture, and kill DEA agent Enrique “Kiki” Camarena for his undercover work as an informant in the cartel for the U.S. government.

Félix Gallardo was then arrested in 1989 and the territories that once belonged to the Guadalajara cartel had to be divided, leaving Guzmán Loera as one of the founders of the Sinaloa Cartel, along with Ismael “El Mayo” Zambada and “El Guero” Palma. At this time, two other major cartels were formed: the Tijuana Cartel under the Arellano Félix brothers and the Juárez Cartel under Amado Carrillo Fuentes.

Under his leadership, the Sinaloa cartel developed creative smuggling techniques and strategies, including building air-conditioned tunnels under the Mexico-U.S. border, hiding drugs in chili pepper cans and fire extinguishers, and catapulting drugs over the border. He diversified the cartel’s production to include various kinds of illicit drugs like heroin, cocaine, and methamphetamine.

On June 9, 1993, Guzmán Loera was arrested for the first time by the Guatemalan Army at a hotel close to the border with Mexico. He was then extradited to Mexico to be kept at the Federal Social Readaptation Center #1, a “maximum-security” prison often called “Altiplano.” In 1995 he was transferred to the maximum-security prison in Puente Grande, Jalisco. Even while in prison, “El Chapo” remained as one of the most powerful drug kingpins in Mexico, and sources declare he was referred to as “El Jefe” (The Boss) or “Don Joaquin” (Mr. Joaquin) and enjoyed many privileges such as having a personal cellphone.

In 2001 he escaped using a laundry cart with the help of Javier Camberos, a prison guard. Official reports suggest that there were at least 70 people involved in this escape.

On September 2001, the U.S. started asking for Guzmán’s capture and extradition to face charges of money laundering and conspiracy in a court in California. The U.S. government started to see Guzmán Loera as a priority target in its war on drugs. In 2004 it announced a $5 million reward for information leading to his arrest. In 2012 the U.S. Department of the Treasury called for the Foreign Narcotics Kingpin Designation Act to freeze the U.S. assets of members of his family.

On February 22nd 2014, “El Chapo” was finally apprehended again by the Mexican Navy in Mazatlán, Sinaloa with the aid of the DEA and Marshall Services. Mexican President Enrique Peña Nieto declined the American request to extradite Guzmán Loera, assuring the U.S. government he wouldn’t escape again.