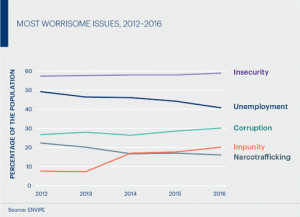 The percentage of citizens reporting impunity as their most worrisome issue has been on the rise in Mexico. Despite insecurity and unemployment being worrisome for a higher percentage of citizens, the number of those concerned about impunity more than doubled between 2012 and 2016, overtaking narco-trafficking at a time when the trend for corruption has also been on the rise.