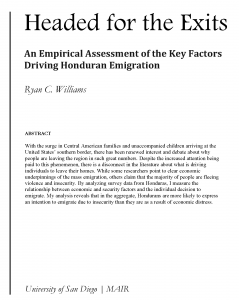 08/07/19- With the surge in Central American families and unaccompanied children traveling through Mexico to the United States, there has been a compelling need to better understand why people are leaving the region in such great numbers. Despite the increased attention being paid to this phenomenon, there is a lack of consensus about the factors driving Central American migrants to leave their homes. While some researchers point to clear economic underpinnings of the mass emigration, others claim that the vast majority of people are fleeing violence and insecurity.

In the paper entitled “Headed for the Exits: An Empirical Assessment of Key Factors Driving Honduran Emigration,” Ryan Williams uses survey data collected by the Latin American Public Opinion Project to compare the relationship between economic and security factors and the individual decision to emigrate from the country of Honduras. While there is an ongoing mass emigration from the Northern Triangle countries of Honduras, Guatemala, and El Salvador, Mr. Williams selects Honduras as his country of focus for three reasons:

Recent estimates suggest that approximately 200-400 people are currently leaving the country of Honduras each day.[4] Over the past five years, roughly half a million people have left the nation of 9 million. In reviewing the existing literature about what drives emigration from Honduras, Mr. Williams identifies possible factors to consider, including poverty, crime, significant issues with governance, major flaws in the justice system, rampant corruption and high levels of impunity, widespread social inequality, and serious environmental risks due to climate change.

Recent research points to two dominant explanations for why people emigrate from Honduras: either because of economic conditions or security concerns in the country. There is a disconnect, however, between those who believe the most significant factors driving people to emigrate are economic in nature and those who see the root problem as violence and insecurity faced by Hondurans. This is the question driving Mr. Williams’ research: which factor, economics or security, has a greater impact on the decision to leave Honduras?

To answer this question, Mr. Williams analyzes survey data collected from residents of Honduras as part of the Latin American Public Opinion Project’s AmericasBarometer survey, which focuses on political, economic, and quality-of-life issues in countries throughout Latin America. The most recent round of surveys took place in 2016 and 2017, and included surveys taken in 29 countries and totaling more than 43,000 interviews. The 2016 survey in Honduras was conducted among a nationally representative sample of 1,560 voting age adults through face-to-face interviews.

This analysis reveals that Hondurans are more likely to express an intention to emigrate if they have been a victim of crime. This likelihood increases by 28.6 percent for each additional crime victimization survey respondents reported. On the other hand, there appears to be a weak relationship between individual or household economic conditions and the intention to emigrate. Contrary to what may be expected, the likelihood of an individual expressing their intention to emigrate actually increases by 2.4 percent for each step up in reported monthly household income. The results were slightly different when considering an individuals’ perception of their personal economic situation. In that case, those with a perception of being worse off were more likely to express intentions to emigrate than those with a more positive perception.

Mr. Williams’ research illustrates that in the aggregate, Hondurans are more likely to express an intention to emigrate if they have been the victim of crime than they are as a result of poverty. These findings are relevant as we work to better understand and appropriately characterize the mass migration out of Central America. The research also serves as an important reminder to the United States that the children and families arriving at its Southern border should be received as potential victims fleeing crime and violence, and not merely as impoverished migrants in search of economic opportunity. Finally, based upon these findings, policy makers in the United States and elsewhere looking for ways to improve conditions in Honduras and stem the massive flow of people out of the region should make reducing crime and enhancing security their highest priorities.