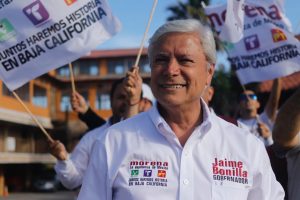 08/06/19 (written by lcalderon) — Jaime Bonilla Valdez was elected governor for Baja California on June 2, 2019, along with five mayors and 25 state Congress representatives. He was initially elected for an extraordinary term of two years, from November 1, 2019 to October 31, 2021. This extraordinary period of governorship was set forth by a Constitutional reform in 2014 that established that the governor elected in 2019 would serve a term of two years (instead of six) in order for the federal midterm elections and state governor elections to coincide, exactly three years after the presidential election.

However, on July 8, 2019, Baja California Congressman Víctor Moran (Movimiento Regeneración Nacional, Morena) called for a secret, unscheduled session, which was held in Playas de Rosarito –about two and a half hours from the state’s capital, Mexicali. At said session, Congressman Moran passed a motion to extend governor-elect Bonilla’s term from two to five years, ending in October 31, 2024 instead of 2021. Mr. Moran’s argument was that having another election in two years would impose a grave economic burden on Baja California’s economy, which is already facing a serious public spending deficit, thus making it more desirable to postpone it until 2024. He also emphasized the importance of giving the government-elect enough time to complete their long-term projects, specifically those designed to address public security concerns at the state level. The motion passed with 21 out of the 25 votes in favor, only three of which were affiliates of the Morena Party. Congressional representatives voted through concealed voting slips and only one National Action Party (Partido de Acción Nacional, PAN) Congressman expressed his disagreement with the procedure and the motion. Congressional representatives from the local party, Baja California’s Party (Partido de Baja California, PBC) were not present at the session; allegedly, PBC representatives were not even summoned.

During that same session, State Congress also approved to create two important positions: Counselor for the Instituto de Transparencia y Acceso a la Información Pública (Institute for Transparency and Access to Public Information, ITAIP) and Superior Auditor for the State. Sources such as El Economista and Sin Embargo allege these positions were Morena’s negotiating assets to convince PAN and PRI’s Congressional representatives to vote for the initiative. Allegations grew stronger when the appointment of Carlos Montejo Oceguera, a longtime PAN member and collaborator of current Baja Calfornia Governor Francisco Vega de Lamadrid, as Superior Auditor was deemed official immediately after the confidential session. Montejo’s appointment became notably suspicious when he was declared to be in charge of auditing the state government’s performance during the last three years. This came just weeks after the Federal Superior Auditor declared that Governor Vega’s government was involved in the embezzlement of over $4.5 billion Mexican pesos (roughly $240 million USD). 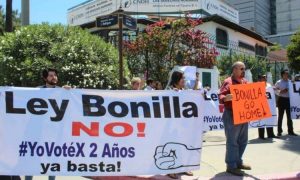 Public opposition to what is now being called “Bonilla Law” manifested soon thereafter. Citizens throughout Baja California called for protests at the local office for the National Human Rights Commission (Comisión Nacional de los Derechos Humanos, CNDH), demanding that the national Supreme Court (Suprema Corte de Justicia Nacional, SCJN) evaluate the reform. They also requested that Congressmen who voted in favor of what they perceive as an unconstitutional action be politically tried. Additionally, they argued that the opinion expressed on June 2nd must prevail, which is when citizens elected Bonilla for a term of just two years – not the expanded five years.

Bonilla’s decision to extend his term made it to the national headlines almost immediately, and the reactions came from all political levels. One of the first institutions to show its discontent was the National Action Party (PAN). The PAN’s national management expressed its condemnation of the term extension, highlighting its discontent with the state Congressman representing their party who voted in favor of extending Bonilla’s governorship. A few weeks later, the PAN started removing its state Congressmen from Baja California.

For his part, Bonilla argued that the term’s extension eliminates the need to have another round of elections in two years. Regardless of the vote on the governorship, Baja Californians still have to vote in five mayors and 25 Congressmen in 2021. The Morena Party also threw its support behind Bonilla’s term extension, noting that the two-year term represents a violation of Bonilla’s political-electoral rights, a claim that Bonilla already submitted to the Electoral Court. This challenge was successful at the state court, but not at the federal court.

When concerns began to be raised, President Andres Manuel López Obrador during his morning address to the media and public said, “If [Jaime Bonilla] would have asked, I would have not approved it” (Jimenez, 2). According to López Obrador, Bonilla’s policy does not does not align with his political ideology;. It is important to note, however, that such topics are often not the types of issues brought before the president. Still, President López Obrador did weigh in given the gravity of the situation. For one, the president clarified that extending the governor’s term did not mean that Bonilla would seek reelection, as  he was not looking to violate the Constitution. Similarly, he stressed, this was certainly not implying that he would seek presidential reelection when his sexenio expires (2018-2024). López Obrador finished by saying that he would not intervene in the matter. It is up to the Judiciary’s Electoral Court to decide whether the term extension is valid in an impartial process that is not deserving of presidential influence, he said.

In response, the federal Congress approved a resolution asking state Congressmen to revert the approval 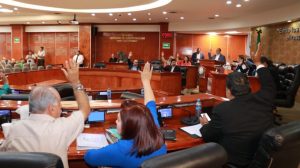 State Congress confirms “Bonilla Law” after being called to a session to re-consider it.

of the “Bonilla Law.” Doing so would  respect the two-year term that citizens chose for governor-elect Bonilla. In return, the Congress of Baja California decided to have an extraordinary, closed-door session in Playas de Rosarito with only 14 Congressmen present. Instead of revesting their decision during this session; state Congressional representatives instead confirmed Bonilla’s term extension from two years to five years. They justified their decision by arguing that the economy of the state had to be preserved and that it was of outmost importance to prioritize state sovereignty in this matter.

After reconfirming “Bonilla Law,” federal legislators started a movement to take the matter to the national Supreme Court arguing that this extension is an act against the Constitution.

In the meantime, outgoing Governor Vega de Lamadrid announced that he would not declare the new reform in the State’s Official Newspaper out of respect for the citizen’s decision to vote for a two-year term. This statement is Governor Vega’s declaration of support for public opposition to the “Bonila Law” since the State’s Official Newspaper is the medium to publish State legislation.

The President of the PAN in Baja California also noted that it would have been possible for Bonilla to challenge the 2014 two-year term reform within the state legal frameworks if he followed the proper procedure 90 days before the election. Bonilla failed to meet the dates and conditions to submit his disagreement, however, thus removing that possible course of action.