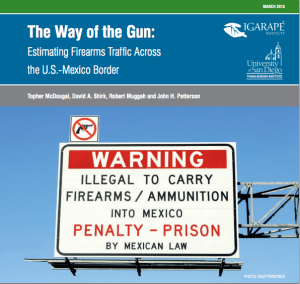 03/25/13 – On March 18, 2013, the Trans-Border Institute at the University of San Diego and the Igarapé Institute from Brazil released the report “The Way of the Gun: Estimating Firearms Traffic Across the U.S.-Mexico Border,” which explores the issue of arms trafficking from the United States to Mexico. While the report recognizes the high levels of violence in Mexico, it highlights that Mexico does not manufacture small arms or light weapons, nor is ammunition available there in sizeable quantities. Moreover, Mexico has some of the most restrictive gun legislation in the world.

Overall, the report finds that:

Based on the empirical findings, the report concludes that ongoing government efforts to regulate firearms trade and trafficking across the U.S.-Mexico border are largely ineffective. Notwithstanding improvements in the efficacy of Mexican authorities in seizing illicit firearms between 2008-2009, they are still meager in relation to the overall volume of weapons likely crossing the border.

“The Way of the Gun” is co-authored by Kroc School of Peace Studies Professor Topher McDougal, Trans-Border Institute Director David A. Shirk, Igarapé Institute Research Director Robert Muggah, and recent Kroc School graduate John Patterson. The report uses a unique econometric approach that is different from other studies previously conducted to estimate the demand for firearms in Mexico by examining the distribution of retail gun distributors throughout the United States. Based on the heavy concentration of gun dealers along the border, the authors are able to estimate a total demand for trafficking across the border, both in terms of firearms and dollar sales for the firearms industry.