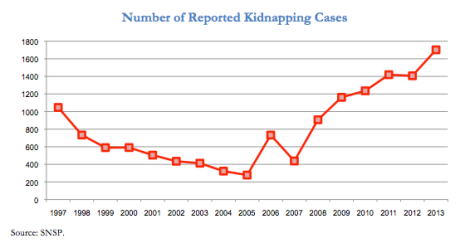 08/06/14 (written by dpera) — More than half way through 2014, nongovernmental organizations and official government sources have reported conflicting data regarding the number of kidnappings in Mexico thus far this year. On the one hand, the Stop Kidnapping Association (Organización Alto al Secuestro, OAS) said that, according to official data, kidnappings have increased by 56% when comparing the number of kidnappings in the first six months of 2013 (1,130) to the same period in 2014 (1,776). However, Mexico’s National System of Public Security (Sistema Nacional de Seguridad Pública, SNSP) reported a decrease in the number of kidnappings nationwide, falling from 975 in the first seven months of 2013 (1,698 total in 2013) to 808 during that same period in 2014.

Such conflicting data raises questions regarding the state of public security in Mexico. While both NGO’s and Mexico’s government claim to have used official data in forming their reports, opposing conclusions is misleading. Mexico’s National Coordinator Against Kidnapping, Renato Sale Heredia, reported in an interview with Vanguardia that he was confident in the reports that kidnappings are decreasing; yet Isabel Miranda de Wallace, president of the Stop Kidnapping Association, has expressed the opposite, saying that the numbers show a failure in state, federal, and police strategy in combating kidnapping. According to a Mexico Voices translation of La Jornada, “The numbers are not decreasing; it seems that we are getting used to being statistics, and [to] the government [acting] deaf,” said Miranda de Wallace. “Despite federal efforts (the Attorney General’s Office (Procuraduría General de la República, PGR) is receiving more and more kidnapping cases), they are not enough since there is [a] lack of commitment from the states and Mexico City.”

Nevertheless, the NGOs and the government acknowledge that kidnapping is still a serious threat in Mexico. According to Justice in Mexico’s special report, “Drug Violence in Mexico: Data and Analysis Through 2013,” kidnappings based on SNSP data have increased dramatically in Mexico since 2007, rising from just over 400 in 2007 to almost 1,700 in 2013. Using its current data, the Stop Kidnapping Association reports that there is one kidnapping every three hours, which equals eight per day, 57 per week, or 243 per month. Most cases, it continues, occur in the states of Mexico (Estado de México, Edomex), Tamaulipas, Morelos, Guerrero, the Federal District (Distrito Federal, DF), Veracruz, and Michoacán. The conflicting data on the number of kidnappings in Mexico parallels the government’s recent contradicting reports on the number of disappeared, both exemplifying the need to streamline better documenting and reporting processes.