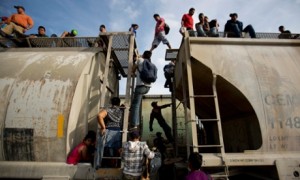 In this July 12, 2014, photo, Central American migrants climb on a north bound train during their journey toward the U.S.-Mexico border, in Ixtepec, Mexico. The number of unaccompanied minors detained on the U.S. border has more than tripled since 2011. Children are also widely believed to be crossing with their parents in rising numbers. (AP Photo/Eduardo Verdugo)